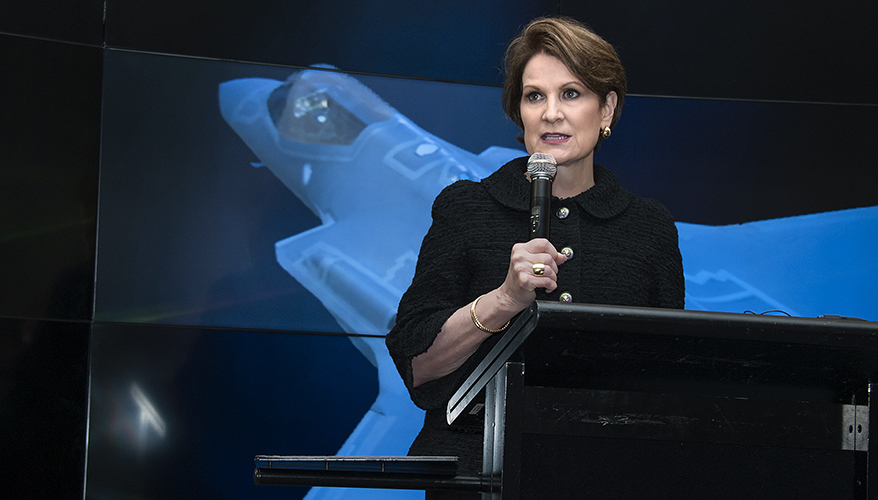 President Donald Trump on March 1 announced via Twitter that he would impose a 25 percent tariff on steel and a 10 percent tariff on aluminum on trading partners. While there has yet to be a formal announcement on the tariffs, Trump on the same morning Hewson spoke, reiterated his seriousness on the issue, again using Twitter to say that Mexico and Canada would be not be exempt from the tariffs unless they renegotiated and signed the North American Free Trade Agreement.

Observers have warned that the imposition of higher tariffs could end up harming U.S. industry.

“We haven’t seen the details of the tariffs and until we do, there isn’t much I can say about what the impact might be for Lockheed Martin [and] for our suppliers, but it is an important subject,” Hewson said.

Hewson was also asked what she would say to the president if she had a chance to advise him on the matter.

Hewson said she hasn’t had any discussions with the company’s global partners surrounding a possible trade war and implications for its biggest program — the F-35 joint strike fighter — or other weapon systems it sells overseas.

In a statement released March 5, the National Defense Industrial Association said "NDIA is concerned that any non-targeted increase in tariffs and resulting international retaliation will harm our defense industrial base and our warfighters, who depend on U.S. industry and its global defense supply chain of allies and partners to ensure they have the best equipment at an affordable cost."

In a separate statement, the Aerospace Industries Association said “America’s aerospace and defense industry is deeply concerned that the anticipated tariffs on aluminum and steel will raise costs and disrupt the supply chain, putting U.S. global competitiveness at risk. There is also a significant threat for retaliation from other countries towards American-made products.”

Richard F. Ambrose, Lockheed Martin executive vice president and president of its space business area, in a briefing with reporters later that day, said the area that would give him a cause for concern if a country were to cut off supplies in a trade war is batteries.

“One of the biggest concerns around batteries is cobalt. Not so much today, but when you go to scale for electric vehicles and such … it could become a very finite resource,” he said.

Cobalt is an essential mineral that is also used to manufacture aircraft turbine engines, marine propulsion systems and missile guidance systems, according to a recent U.S. Geological Survey report, “Critical Mineral Resources of the United States.” About half of the world’s cobalt supply is mined in the Republic of Congo and shipped to China for refinement. The United States, however, maintains a strategic stockpile of the mineral.

Update: This story has been updated to include a statement from the National Defense Industrial Association.