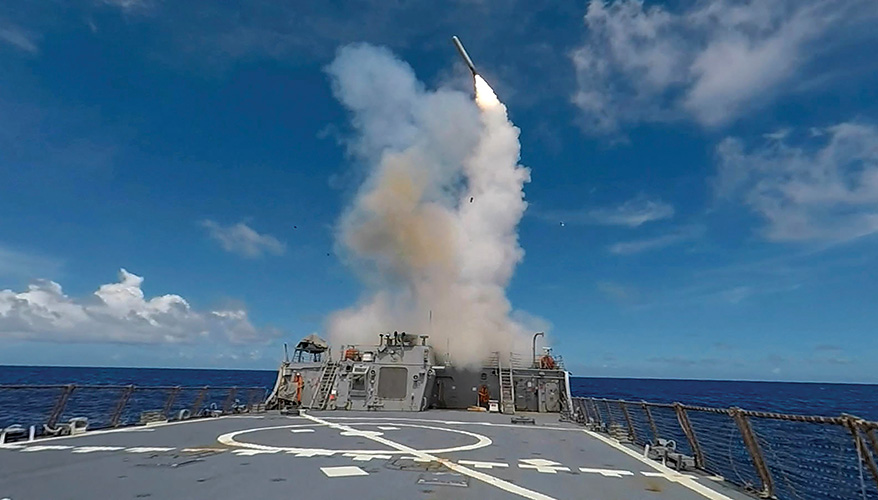 A Tomahawk land attack missile is launched from a Navy destroyer.

The Pentagon is looking to add a new nuclear-armed sea-launched cruise missile, or SLCM, to its inventory. The cost of such a system could vary significantly depending on which development path is chosen, analysts said.

The United States has had similar weapons in its arsenal in the past but they were retired during the Obama administration.

“We will immediately begin efforts to restore this capability by initiating a capability study leading to an analysis of alternatives for the rapid development of a modern SLCM,” the Defense Department’s recently released nuclear posture review said.

Opposition to such a move came swiftly from Democrats on Capitol Hill and the arms control community.

Just how much would a new nuclear-armed cruise missile cost? That depends, experts said.

There are several options for developing such a weapon, said Todd Harrison, director of defense budget analysis at the Center for Strategic and International Studies.

The analysis of alternatives would likely consider, “can we adapt existing cruise missiles like the Tomahawk? Can we evolve it [and] put a nuclear warhead back on it like we used to?” he said.

Other alternatives would be to create a nuclear variant of the next-generation land attack weapon that the Navy is planning, or build a whole new missile for the nuclear mission, he said.

“The most expensive option is if they decided to build a brand new cruise missile just for carrying the nuclear weapon,” Harrison said. “It would be less expensive if they adapted the cruise missiles they’re already planning to build … to carry nukes. And then probably the least expensive [option] would just be to go back to the nuclear-capable Tomahawks.”

All of those have different pros and cons associated with them that the analysis of alternatives would need to cover, he added.

In an op-ed for Proceedings last year, retired Adm. Sandy Winnefeld and former Undersecretary of Defense for Policy James Miller said reintroducing a nuclear variant of the Tomahawk land attack missile could be relatively cost effective.

“The required warhead could leverage the B-61 life-extension program and/or the planned warhead for the long-range standoff (LRSO)” air-launched nuclear cruise missile, they said. “New missiles would need to be modified to carry the warhead, and the Navy would need to recertify boats assigned to carry these missiles. But these are modifications to existing programs; no new weapon would need to be dragged through the acquisition system.”

Joan Rohlfing, president of the Nuclear Threat Initiative and former senior adviser for national security to the secretary of energy, noted that the LRSO program is projected to cost about $25 billion.

“If you assume that you’re repurposing an existing nuclear package rather than trying to design a new weapon from scratch, you might find that [a nuclear SLCM would be] in the same neighborhood,” she said.

The most logical move might be to create a nuclear variant of the next-generation land attack weapon rather than a totally different system, he added. “You don’t have all of those redundant development costs.”

The Pentagon has yet to release a cost estimate for the next-gen missile, he noted. “It’s just too premature to really have any idea what the costs would be” for a nuclear SLCM.