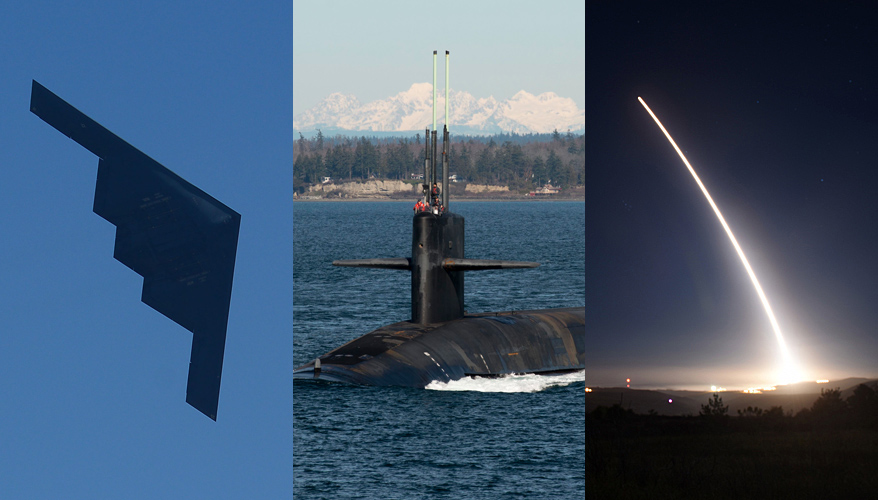 The call for additional capabilities appeared in the Trump administration’s highly anticipated nuclear posture review, which was released Feb. 2. The study painted a bleak picture of a deteriorating security environment, and argued that the nation needs a more flexible approach for deterring aggression and, if necessary, waging nuclear war.

“While the United States has continued to reduce the number and salience of nuclear weapons, others, including Russia and China, have moved in the opposite direction,” it said. “They have added new types of nuclear capabilities to their arsenals, increased the salience of nuclear forces in their strategies and plans, and engaged in increasingly aggressive behavior.”

Other actors such as North Korea also pose growing threats, it said.

“There is no ‘one-size-fits-all’ for deterrence,” the report said. “Consequently, the United States will apply a tailored and flexible approach to effectively deter across a spectrum of adversaries, threats and contexts.”

Possessing low-yield nuclear weapons is one means of doing so, the report said.

In the near term, the Defense Department and the National Nuclear Security Administration plan to modify a small number of existing sea-launched ballistic missile warheads and lower their yield. The capability will enable a prompt nuclear response option that is able to penetrate enemy defenses, the report said.

“This is a comparatively low-cost and near-term modification to an existing capability that will help counter any mistaken perception of an exploitable ‘gap’ in U.S. regional deterrence capabilities,” it said.

In the longer term, the Defense Department will also pursue a new nuclear-armed sea-launched cruise missile. Such a weapon would provide another forward-deployed, low-yield option, the report noted. Developing the technology would be “an arms control-compliant response to Russia’s non-compliance with the Intermediate-range Nuclear Forces Treaty, its non-strategic nuclear arsenal and its other destabilizing behaviors,” it added.

The United States has had similar weapons in its inventory in the past. However, the Obama administration’s 2010 nuclear posture review announced that they would be retired.

“We will immediately begin efforts to restore this capability by initiating a capability study leading to an analysis of alternatives for the rapid development of a modern SLCM,” the new study said. The intent is to leverage existing technologies to make the project more cost effective.

Tom Karako, senior fellow at the Center for Strategic and International Studies, said the call for a new cruise missile is one of the most important aspects of how the nuclear posture review is tackling the new strategic environment. The weapon would provide “a more … credible response [against a limited nuclear attack] and in a more dispersed basing mode,” he said.

Unlike tactical aircraft that are nuclear capable, low-yield sea-launched ballistic missiles and cruise missiles would not require or rely on host nation support, the report noted.

They will provide “additional diversity in platforms, range and survivability, and a valuable hedge against future nuclear ‘break out’ scenarios” by adversaries, it said.

Undersecretary of Defense for Policy John Rood told reporters that both capabilities will be included in the fiscal year 2019 budget request, which is expected to be released Feb. 12.

He did not provide additional details about plans for the cruise missile.

“I can’t quote you any specific timeframe or dollar figure because of the [early] stage of that activity, but it’s one of the supplementary capabilities that we think is very important to pursue,” he said during a briefing at the Pentagon after the study was released.

Gary Schmitt, co-director of the Marilyn Ware Center for Security Studies at the American Enterprise Institute, said he expects there will ultimately be sufficient political support on Capitol Hill for the new weapon. “If for no other reason than the U.S. needs a credible, theater-relevant response to the Russian violation of the INF Treaty but one which doesn’t result in the U.S. abandoning the treaty,” he said in an email. “No one in Washington or Europe is ready for that debate.”

The other nuclear modernization plans described in the study hew closely to those of the Obama administration, including the retention of the triad of ground, sea and air-based delivery platforms. The study called for continuing efforts to develop a wide variety of new systems to replace aging legacy equipment.

That is good news for companies who are working on the Columbia-class submarine, B-21 bomber, ground-based strategic deterrent, long-range stand-off weapon and other related efforts.

However, the United States’ nuclear arsenal comes with a high price tag. The Congressional Budget Office recently estimated that the Obama administration’s plans for modernizing and maintaining the force — which the Trump administration is largely following — would cost $1.2 trillion over the next 30 years. Some observers have questioned whether they will be affordable or politically viable as the Pentagon also pursues major upgrades to its non-nuclear capabilities.

Mattis acknowledged the fiscal challenges that lie ahead, but argued that the benefits of nuclear modernization would outweigh the costs.

“Maintaining an effective nuclear deterrent is much less expensive than fighting a war that we were unable to deter,” he said. “This is a top priority for the Department of Defense.”

Karako said the plans are not prohibitively costly and he expects lawmakers and the Pentagon to resource them.

“Even at the height of the coming wave of recapitalization it’s only expected to be 6 or 7 percent of the DoD budget,” he said. “If it’s your top priority, you are going to find a way to pay for it.”