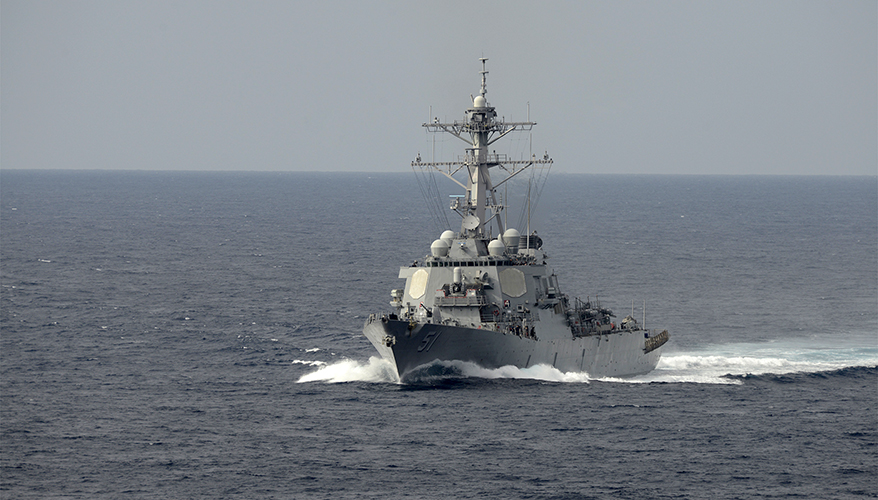 The request, which was released Feb. 12, calls for a topline of $194.1 billion for the Department of the Navy including overseas contingency operation funding. That is a seven percent bump over the 2018 budget request, according to a service budget document.

The boost in funding would come as the U.S. military is trying to ready itself for combat against advanced adversaries.

“The long-term strategic competitions with China and Russia are the principle priorities for the department which require both increased and sustained investment,” Deputy Assistant Secretary of the Navy for Budget Rear Adm. Brian E. Luther said during a press briefing at the Pentagon.

The request includes $21.9 billion for the Navy’s shipbuilding and conversion account, a 7 percent increase from the 2018 request.

The budget request also includes $3 billion in advanced procurement funding for the Columbia-class ballistic missile submarine — the Navy’s top acquisition priority — and $1.6 billion to finance the second increment of detailed design and construction for the third Ford-class aircraft carrier, the USS Enterprise CVN-80.

It added 11 ships across the five-year budget plan, also known as the future years defense program, compared to last year’s submission, Luther noted. In total, the Navy plans to procure 54 new ships from fiscal years 2019 to 2023 including: one Columbia-class submarine; 10 Virginia-class subs; 14 DDG-51 destroyers; one LCS; and six FFG(X) frigates.

Aircraft programs also made out well in the budget. It seeks $19 billion for Navy aircraft procurement, about a 27 percent increase compared with the previous year’s request.

“All major aviation acquisition programs remain consistent or increase from ‘18 to ’19,” Luther said.

“Our strike fighter inventory management strategy remains challenged with F/A-18A-D aircraft that reach the end of their service lives before sufficient F-35 aircraft can be delivered into service,” the budget document said. “Our multifaceted strategy to sustain and recapitalize the strike fighters is reliant on … procurement of additional F/A-18E/F and F-35B/C aircraft,” it added.

The service is also pursuing unmanned undersea vehicles. Increased funding in 2019 would “accelerate future capability and support steady growth of the fleet’s family of systems,” the document said. It includes $118 million for advanced undersea prototype development, fabrication and testing of the Orca extra large UUV. Additionally, $93 million would support the advancement of the Snakehead large diameter UUV and other technologies, it noted.

“The autonomy, the cyber and artificial intelligence pieces I think are key to provide new capabilities that … will enable the forces we have to be more effective while we’re still trying to build up the number of ships and aircraft,” said Tom Callender, senior research fellow for naval warfare and advanced technologies at the Heritage Foundation, a Washington, D.C.-based think tank.

The Navy is also looking to make its platforms more lethal by enhancing their weaponry. The 2019 weapons procurement budget request comes in at $3.7 billion. For the future years defense program, the service aims to buy 1,046 Tomahawk long-range missile modification kits. The service will also continue development of a follow-on next-generation land attack weapon, the document said.

Additionally, over the course of the FYDP the Navy wants to buy: 75 air-launched, long-range anti-ship missiles, known as LRASM; 625 SM-6 Standard Missiles, which have air and missile defense and anti-ship capabilities; and 64 over-the-horizon anti-ship missiles.

Callender said the budget blueprint is a positive sign for those who want to see a much larger and more lethal Navy.

“They’re kind of getting back to the right track” by adding more platforms and other capabilities, he said. However, it remains to be seen whether lawmakers will agree to fully fund the service’s new budget plans.

“That’s the piece that’s going to come into play in the long term of being able to sustain this buildup,” he said.

Cost of Ford-Class Carriers in Question