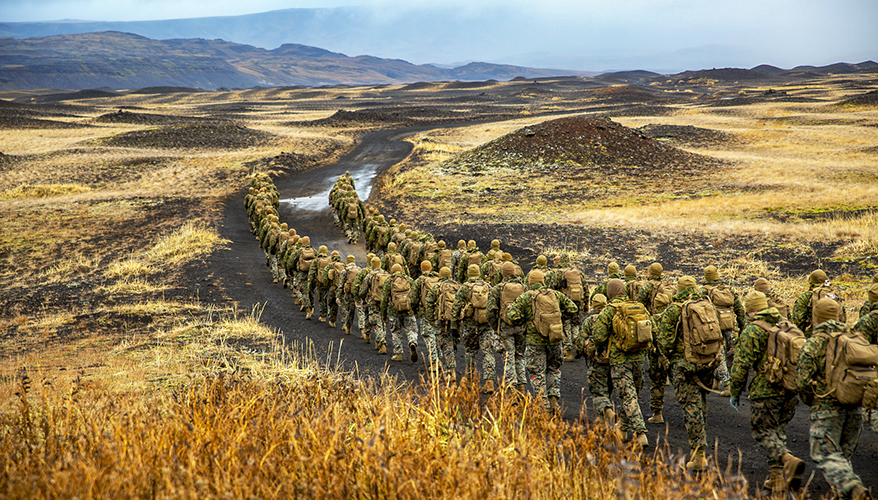 On Thursday afternoons at Marine Corps Base Quantico, Virginia, leaders have a unique opportunity to test their skills in crisis situations. The Decision Game Club uses historical crisis points as leadership development classes, intent on teaching participants how to think strategically and critically.

Using the Case Method, a leadership technique first developed by Harvard Business School, students walk in the footsteps of presidents, generals, and other important leaders, fighting their battles and viewing problems from a contemporary standpoint.

The benefits of this teaching style are important for service members. As it focuses on creative problem solving, and moves away from strictly fact-based knowledge, it allows students to grow as leaders. Students forget facts when they are in “cram and dump” mode, but when facts are presented in context, they remember more information.

Every case involves several critical elements: the biography of the leader, the historical background to the crisis and the crisis itself. The class begins with the facilitator stating, “This is you.” A picture of the leader flashes onto the screen. The facilitator then gives a brief biography of that leader, including their family life, education, and other relevant factors. But it is not a full biography, rather the section ends with the leader in the role they are in when the crisis occurs.

With the leader and the historical crisis introduced, the facilitator ends their initial presentation by asking “What now?” This should occur roughly 15 minutes into the class, leaving the majority of the class time for discussion. From that point onwards, the participants take over the class, acting as the leader in the crisis.

They are free to suggest any course of action, as long as it follows information the leader had access to, and is feasible given the technology available to the leader at that time. Students not only have to suggest ideas, they have to defend potential short falls in those plan if other students disagree with them.

Several factors contribute to the success of a Decision Game Club meeting. The most important factor is the willingness of the students to participate, and make the discussion their own. Every idea suggested will have merits and disadvantages, each of which need to be weighed against each other. Students need to be aware of all aspects of their ideas, military, economic, social and so on.

Ideally, the facilitator will be able to step back, and allow the students to move their ideas along fluidly.

But the facilitator must not be afraid to cold call individuals at certain times. Cold calling — when a facilitator picks an individual to speak — can be a useful tool to keep conversations moving. If one idea is continually suggested, cold calling can bring new options to the class, and allow these options to be explored. It is also a good technique to use when certain students are contributing a great deal to the conversation, and others are reluctant to speak. The loudest ideas are not necessarily the best ideas, or even good ideas. Part of the success of a class may be in motivating shy students to participate and find their own voice.

The cases that produce the most conversation combine several important factors. The individual case should not be known to the participants. When students know how a crisis ends, they tend to follow the historical narrative. This is counter-productive, and keeps students from trying to solve the problem creatively. Famous or recent crisis points should be avoided as cases.

Forward reading, if utilized, must be only contemporary sources. Writing completed after the crisis ends can reveal information unknown to the leader, and direct students away from options they otherwise would have considered viable. Contemporary sources also bring forward the biases and priorities the leader would have faced at the time, allowing the students to better step into the shoes of that leader.

Students should be discouraged from using the internet during a case. Looking up answers online takes students away from the conversation. It also provides them with the historical narrative, which will limit their creative problem solving abilities.

Though it can be difficult to accomplish, the facilitator should also strive to create a class that has multiple dimensions. Crisis points that have military components, civilian considerations, economic nuance, and cultural aspects will garner the widest amount of conversation. It will also motivate people with different backgrounds and educations to contribute more, and therefore create more ideas.

When there are about five minutes left in the class, the facilitator again takes control, and gives the historical narrative regarding how the leader resolved the crisis. They also will take a minute to answer any questions the participants may have, and address specific aspects of the case they feel needs clarification.

The inclusive nature of the class creates an atmosphere to create more ideas. If the class were only civilians, or only service members, their responses would be limited by their educations and backgrounds. But in a setting where there are active and former service members as well as civilians, more ideas are presented, critiqued, and discussed than there would be if it were only the one group.

Similarly, the rank-less nature of the class ensures that all members have their ideas heard. While customs and courtesies are observed, all students are viewed as equals by the facilitator. Officers, enlisted members, and civilians all present their ideas without regard to rank or station. In the era of the “strategic corporal” it is imperative that junior leaders be taught to think and express their ideas, and have them respectfully heard by higher leaders.

The Decision Game Club is open to everyone. Current participants are a mixture of Marine officers and non-commissioned officers, and civilians, including several research librarians. Retired military members also frequently choose to participate. The Decision Game Club meets weekly in room 125 in the Gray Research Center at Quantico on Thursdays at 16:30.

Kevin Johnston is a contractor and technical writer working for the Headquarters Marine Corps Personnel Studies and Oversight office. Prior to that, he was a Transportation Corps officer in the Army. The views expressed within this writing are his own.