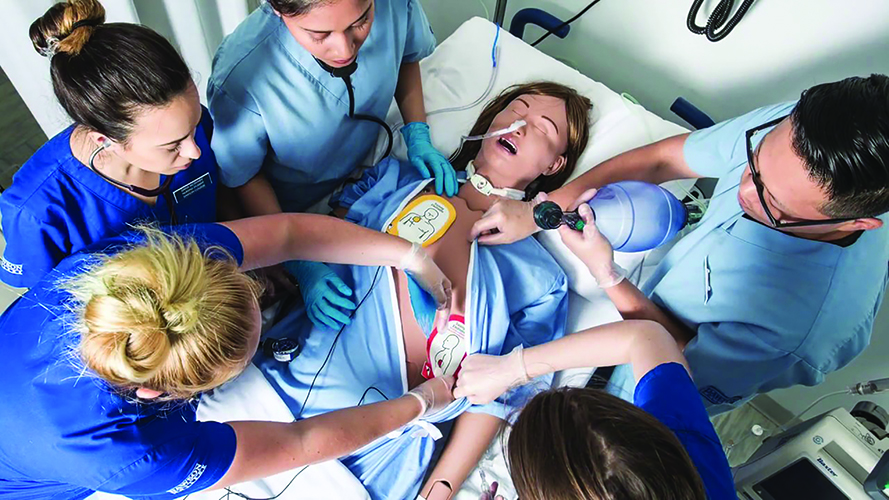 OMAHA, Neb. — Every June as residents fresh out of medical school join hospitals, the death rate for patients rises.

In medical circles, the well-documented trend is called “Black Wednesday” for the day these new and inexperienced physicians arrive, or sometimes “the killing season” for the weeks that follow.
The high death rate is chalked up to the new doctors’ inexperience. By the end of June, mortality rates at these institutions begin to fall again as the doctors learn from their mistakes.

“The problem is that obviously they are doing that at the expense of the patients. They are killing patients. That’s how they are learning,” said Dr. Robert Amyot, president of CAE Healthcare, a Quebec-based modeling and simulation company.

NTSA and the coalition organize a yearly meeting around a theme in order to explore synergies between industries that use modeling and simulation. In 2017, it was held in Michigan to exchange ideas with the automotive sector. In 2018, the University of Nebraska’s Medical Center hosted the event to look at where the worlds of military and medical simulation meet. The consensus is that the health care industry is far behind in using training and simulation to educate its personnel.

Rick Severinghaus, chair of the coalition’s policy committee, said, “the deployment and application of modeling and simulation and visualization technologies is far more advanced in DoD because they have been working on it for a far longer period, forced by circumstances.”

Yet the two industries have a lot to offer each other and intersect when it comes to patient care.

“When you think about hazards to [military] personnel, the simple example is injuries. We call them ‘patients’ in the civilian world. We call them ‘wounded soldiers’ in the military world, but some of the modeling and simulation technology can be used to treat, diagnose, train or otherwise improve the performance of medical training for personnel and doctors, either in the [operating room] or the battlefield,” Severinghaus said.

There is a lot of technical research that applies to both health care and the military domains, but the two industries speak in different languages and think in terms of different priorities, he added.
The “Black Wednesday” phenomenon is a symptom of a profession that has not taken advantage of modern trends in training and simulation, Amyot said. Part of the reason is cultural, particularly in medical schools, he added.

The general public would probably call the U.S. health care field a “high performing” industry, but it is not. Examples of high-performing sectors are found in civil aviation, nuclear and chemical facilities and Navy aircraft carriers. These organizations are obsessed with safety and they won‘t make concessions, he said.

“Health care makes a lot of concessions. Safety is a priority, but it’s not a No. 1 priority,” he said.

Jeffrey Gold, the medical center’s chancellor, has been at the forefront of bringing simulations to the health care field. He oversees a medical center that is a working hospital, a research institution and that trains future doctors and nurses. That makes it a good place to bring forth new ideas such as incorporating more experiential learning. The center features the Interprofessional Experiential Center for Enduring Learning, or iEXCEL, program devoted to improving medical training.

With some 440,000 preventable deaths in hospitals per year, “this is not the time for incremental change,” Gold said.

Medical students listening in on a lecture will only retain about five percent of what was said, Gold noted. Retention for reading textbooks or scholarly journals goes up only to 10 percent. Experiential learning, where students are actually performing real-world tasks, has a 90 percent retention rate.

“Yet the majority of health professions education today is in the traditional teaching and learning and very little in the experiential learning model,” he said.

Since practicing on real humans is not possible for many procedures, augmented reality, virtual reality and other computer simulations will be key to improving medical training. The University of Nebraska Medical Center is incorporating more of this kind of learning in its pharmacy, dentistry, nursing and doctor training programs, he said.

“The truth is that it’s — believe it or not — easier to simulate the flight deck of a military aircraft than to simulate the normal anatomy and physiology and emotions of a human being,” Gold said.
CAE Healthcare is known for its mannequins that simulate the human body and can also communicate their symptoms. It is working on holograms of simulated patients that students will be able to walk around and peer inside. They could watch a baby being born as it makes its way through a birth canal, Amyot said.

Gold said: “This does not replace hands-on clinical care at the bedside, in the operating room, in the emergency room, etc.” However, it makes these students and residents more comfortable the first time they are thrown into real-world scenarios.

Also, health care costs are rising so fast “we are going to hit a wall,” he said. The industry will be forced to look at practices to reduce costs, just as the military has done with its simulators.
This means they will have to embrace improved training, he said.

“The future looks bright. Although the health care field is far behind, it seems to me that if we look at all the initiatives … it’s just a matter of connecting the dots,” Amyot said.