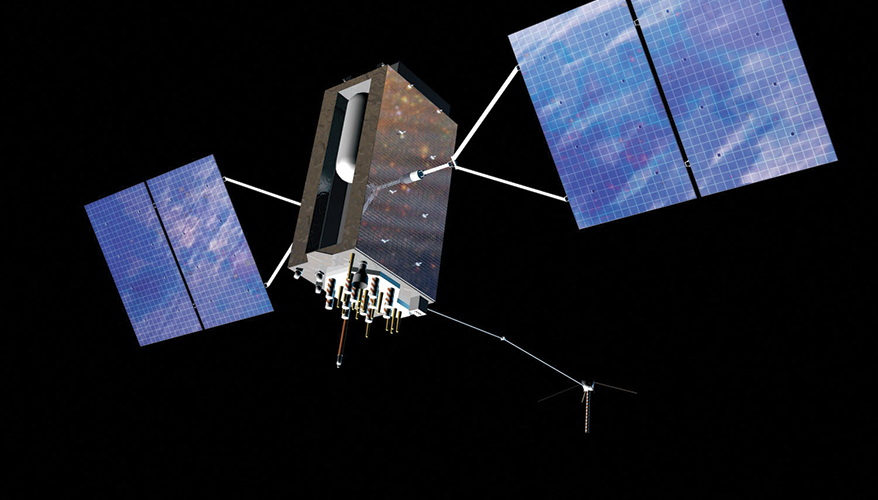 The first GPS III satellite, also known as Space Vehicle 01 (SV01), is slated to be put into orbit in December. The company shipped it to Cape Canaveral, Florida, in August, said Johnathon Caldwell, Lockheed’s program manager for navigation systems. It is the first in an initial series of 10 spacecraft the Air Force put under contract with Lockheed. The company inked a $7.2 billion deal in September to build the 22 satellites required to complete the fleet.

GPS III will be the most powerful satellite of its type, with three times greater accuracy and up to eight times improved anti-jamming capabilities over the previous GPS II satellite design block, Caldwell said. SV01 will travel to space aboard a SpaceX Falcon 9.

“The world is dependent on GPS, from getting directions to getting cash from an ATM or trading on the stock exchange,” she said in a press release in September. “These satellites will provide greater accuracy and improved anti-jamming capabilities, making them more resilient.”

As the Air Force readies for the launch, Lockheed Martin has begun a series of updates to the existing ground control system as the program’s primary system, which is being developed by Raytheon, has fallen behind schedule.

The program to develop the next-generation operational control system, also known as OCX, has been delayed and is not expected to be finished until 2021.

Until OCX is fully available, the upgraded ground system will be used to integrate and test the new GPS III satellites, said Caldwell.

GPS III has three components — the spacecraft, the ground control system and GPS-enabled equipment. All are being developed on different timelines, and the OCX delay has complicated matters, according to a December 2017 Government Accountability Office report, “Global Positioning System: Better Planning and Coordination Needed to Improve Prospects for Fielding Modernized Capability.”

In 2016, the Air Force was forced to restructure the troubled program after Raytheon failed to deliver the first two software blocks of OCX. The rising costs of the program had triggered a Nunn-McCurdy breach, which requires the Defense Department to notify Congress about major cost overruns.

The Air Force then placed Lockheed Martin under two contracts to upgrade the existing system and make it capable of serving as a gap filler prior to the completion of OCX.

“In order to go ahead and keep the cadence going with the space side … and start to make use of the vehicles, the government funded us for some upgrades to the ground system which we have been making progressively,” Caldwell said.

The updates will include a modernized M-code signal, which provides encrypted and more precise navigation data exclusive to the military and government users, and contingency operation modifications, which will enable the satellites to perform their positioning, navigation and timing missions for more than 1 billion users.

The M-code upgrades will also improve anti-jamming and anti-spoofing capabilities.

Overall, the modifications will give the Air Force “the opportunity to integrate these satellites into the constellation and to start testing some of GPS III’s advanced capabilities,” Caldwell said.

According to Lockheed, the upgraded ground system will be ready by May 2019 and the M-Code software is slated to be delivered by 2020.

Meanwhile, Block 0 of Raytheon’s OCX is ready to support SV01 during the upcoming launch in December.

“We are good to go. So long as the other confluents are on track, we will be good for the launch in December,” Rod Hodson, Raytheon’s deputy OCX program manager, said.

The program is broken up into two blocks, Hodson said. One is Block 0, which is the launch-control system, and the second is Block 1, which is the balance of the capability for the overall control.

Originally, the system was intended to include three blocks, but Raytheon will merge planned Block 2 capabilities into Block 1.

“A lot of the work we did for Block 0 feeds into Block 1 and that’s why we are so far along at this point,” Hodson said.

Block 0 will also be able to tap into existing GPS satellites. The ground segment will also enable the utilization of the GPS satellites that are already on orbit, and the new ones, Hodson said.

Meanwhile, Block 1 is moving forward and will be ready by 2021, according to Raytheon.

The Air Force renegotiated the schedule for OCX Block 1 with a new completion date set for June 2021. Block 0, which will support the launch, was delivered in September 2017.

When it is ready, Block 1 will help improve the signal accuracy, integrity and availability. Above all, OCX is being designed to improve the ground segment’s cyber protections, Hodson noted.

“The big piece of this — and I can’t emphasize this enough — is the cybersecurity and information assurance that we have put in place, and that is in place right now on the launch and checkout system that we have delivered to the Air Force,” he added.

As new threats evolve, the satellites are capable of integrating and updating their security controls, Hodson said.

“The security implementation that we put in place, I would suggest they surpass anything that has been put in place in similar systems worldwide,” he noted.

The satellites are continually undergoing Air Force assessments, testing their security measures to assure the service’s requirements are being met.

“We’ve actually had two Air Force driven assessments. One of them was actually an attack assessment and the system behaved exactly the way we needed it to behave. It was very secure,” he said.

Block 1 has now entered the integration and test phase of the program, Hodson said.

OCX is over 90 percent complete with coding and will hit its target completion date in 2021, said Hodson. Raytheon is currently doing integration exercises with the Air Force to prepare for the December launch, he added.

The ground control system’s advanced automation technology will also allow the Air Force to cut operational staff by about 30 percent, he said.

Once complete, the new ground system will take over for the upgraded legacy segment.

The satellites will be the first to broadcast the new L1C civil signal, which will be shared by other international global navigation satellite systems and will provide connectivity for both commercial and civilian users, he said.

The L1C civil signal also brings interoperability with constellations such as Galileo, which is the European Union’s civilian global navigational satellite system. Its signal became available in December 2016. The system is slated to be complete, with 24 operational satellites, in 2020.

As the launch of SV01 nears, Lockheed Martin’s second satellite (SV02) was declared by the Air Force complete, fully tested and ready to launch.

While SV02 is slated to be launched in 2019, five other satellites are in various developmental stages at the GPS III processing facility, which Caldwell refers to as the “hive.”

“It is busy, it’s humming with activity,” he said. “It’s exciting to bring people through and show them what a large-scale satellite production line looks like.”