Dunford Slams Google for Working with China, But Not U.S. Military 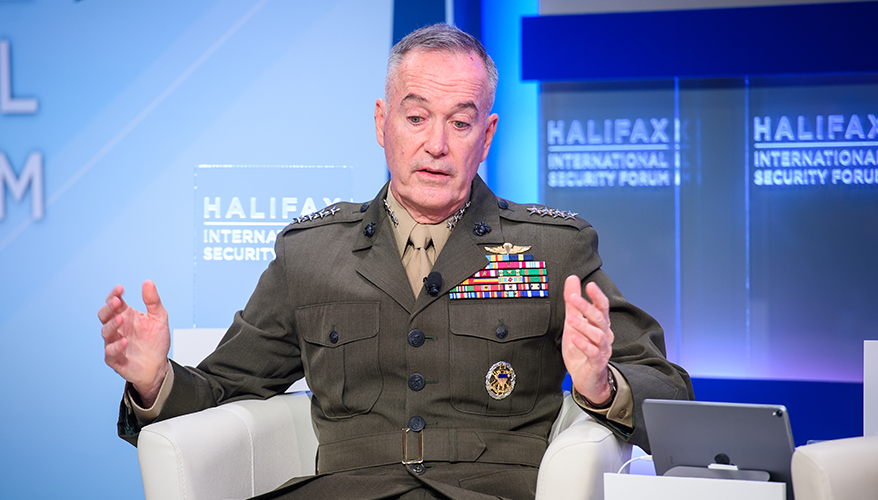 HALIFAX, Nova Scotia — Chairman of the Joint Chiefs of Staff Marine Corps Gen. Joseph Dunford —during a wide-ranging interview at the Halifax International Security Forum — took Google to task for its recent decision to withdraw from a Defense Department artificial intelligence initiative.

“I have a hard time with companies that are working very hard to engage in the market inside of China, and engaging in projects where intellectual property is shared with the Chinese, which is synonymous with sharing it with the Chinese military, and then don't want to work for the U.S. military,” he said Nov. 17.

Dunford said he did not want to single out any specific company, but had been asked by an interviewer specifically about Google’s decision not to continue working with the Pentagon on its Project Maven AI initiative after a larger number of its employees objected to the program on moral grounds.

“This is not about doing something that's unethical, illegal, or immoral. This is about ensuring that we collectively can defend the values for which we stand. And that would be the argument I would make to the tech companies,” he added.

Dunford said the military needs high-tech companies. Historically, the nation’s industrial base and its human capital have given the armed forces a competitive advantage.

“Quite frankly, we need a reliable, effective partnership with the tech companies inside the United States — and for that matter in all the countries that have democracies — to ensure that we can protect democracy,” he said.

Meanwhile, Dunford sees that competitive advantage eroding. Responding to a National Defense Strategy Commission report released earlier in the week that suggested the United States could lose future wars against rivals such as China and Russia, the chairman of the Joint Chiefs of Staff said the military was fine now, but that may not be the case in a few short years.

But without sustained, predictable funding and a focus on fighting in all the domains in which the military will be challenged — land, sea, air, space and cyberspace — meeting those commitments will be difficult, he said. “Four or five or six years down the road, we will probably not have the same degree of confidence in talking to you about our ability to meet alliance commitments.”

However, Dunford stopped short of saying the United States might lose a war. “It doesn't mean we would lose, but it certainly could take much more time than we envisioned.” The armed forces would suffer more casualties than it would have otherwise, he said.

“If you look at where we are today, we do have a technological advantage over Russia and China,” he added. Yet the two nations have invested a great deal in weapon systems that are designed to attack perceived U.S. vulnerabilities. And they did this while the Pentagon was fighting the global war on terrorism and was failing to modernize its weapons, he said.

Congress over the past two years has boosted military funding and put modernization accounts back on a positive trajectory, Dunford noted. But that must be sustained, he said.

Dunford rejected criticism that the Pentagon was not investing in the right kinds of weapon systems. It will continue to build traditional platforms such as ships and airplanes while trying to maintain a balance with more modern kinds of warfare technology like cyber, he said.

The Defense Department has a list of 14 key categories in which it is competing with Russia and China. That list is classified, but the items are predictable: cyberspace, electromagnetic spectrum, space, maritime, etc., he said. It looks at where the U.S. military and its allies are now, and where their rivals will be through about 2025. This is informing where the Pentagon will invest in modernization, he said.

Artificial intelligence will be a key technology driver, he added.

“I'm convinced in terms of supporting decision-making and then achieving mass in terms of capability that AI has extraordinary potential. And I do think that whoever masters AI is going to have a decided competitive advantage,” Dunford said.

The 2020 budget will see a renewed focus on research and development as those accounts have not been adequately funded, he said. Secretary of Defense James Mattis is asking that the department “spends an adequate amount of money on tomorrow,” Dunford noted.

“That's one of the areas that we frankly assumed risk for a long period of time: research and development, science and technology,” he said. “Those investments [are the ones] that will allow us to maintain an edge technologically in the future.”

Re: Dunford Slams Google for Working with China, But Not U.S. Military

I close my eyes and can picture a perfect America. The executives at Google and Facebook can do the same thing. The reality of a mature democracy is the pictures we each have are often diametrically opposed to each other. In the abstract I could look at other's pictures and suggest that if they succeed in their vision of America I would have to take up arms against such a country. They can say the same against my vision. Such is the end for any mature democracy.

The General might not be fighting for the USA anymore. At this stage he may by fighting for the principles that will drive a new America. The same is true for those billionaires that demand a different America. Those differing ideas may be the seeds for two different countries or the need to subjugate one idea over another using force. It is up to the General to succeed in spite of those opposing views.

Bryan at 6:37 AM
Re: Dunford Slams Google for Working with China, But Not U.S. Military

Louis Hooffstetter at 9:37 PM
Re: Dunford Slams Google for Working with China, But Not U.S. Military

Why is Google NOT doing Pentagon work but working for the Chinese. Simple, Money. I am sure the Chinese told Google if they did work for the U.S. Government they may divulge the secrets they are learning in the Chinese area. So they told them not Tickee no washee. And Google being a group of Idealist and Elitist said. Sure, we are okay with screwing the rest of the world. As long as we make our money.