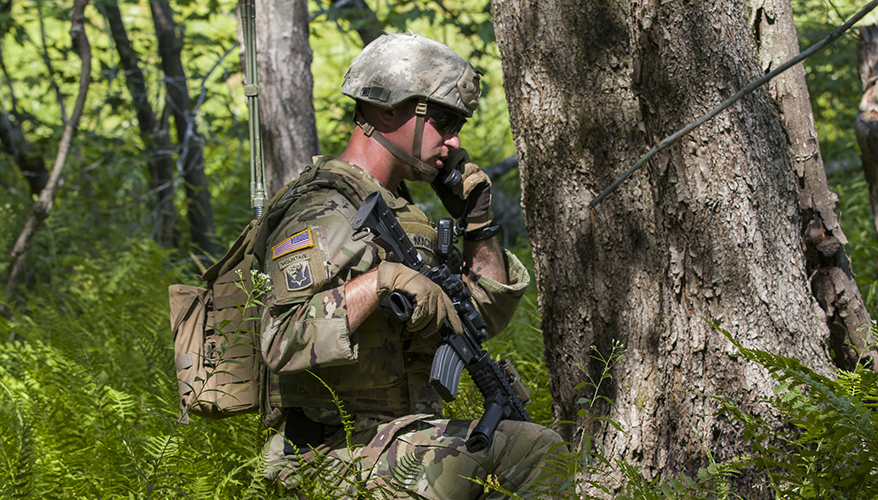 LOS ANGELES — Enhancing data and communication networks is one of the Army’s top modernization priorities. To accomplish its goals, the service will have to lean on industry as it confronts its own organizational shortcomings, a senior official said Oct. 29.

For the past 18 months, the Army has been in the midst of the largest and most comprehensive review of its network in 35 years, Lt. Gen. Bruce T. Crawford, chief information officer, Army G-6, said at the MILCOM conference in Los Angeles hosted by AFCEA and IEEE.

“To put things into context and perspective, the last time we took on a task of this magnitude the internet … was just starting to take shape,” he said during a keynote address. “There was no such thing as social media. … The concept of cybersecurity did not exist.”

The network is expected to be a key contributor to the Army’s other top modernization priorities including: long-range fires, next-generation combat vehicle, future vertical lift, air-and-missile defense and soldier lethality.

Those capabilities are expected to leverage unmanned systems, autonomy and sensors, which must be connected to the rest of the force through data links.

However, the service is in a stiff competition with other organizations for IT talent, Crawford noted.

“The thing that we've come to realize … over the last 18 months of this introspective review of our networks is we don't have the institutional talent to achieve the vision of delivering these six modernization priorities by [the target date of] 2028,” he said. “Even if we could build that talent, I'm not sure that we could sustain it.”

As a result, the Army will need to tap into the know-how that is resident outside the Defense Department, he said.

“You have to do both,” he said. “If I lock down the network but my weapon systems that are part of the network are not secure from the end point all the way through to the enterprise, then we’ve got a problem.”

The challenge will only become more acute as the Army moves forward with its top modernization priorities, which will be augmented by new position, navigation and timing capabilities and the synthetic training environment, he noted.

All of those technologies are going to generate a large amount of data, which not only has to be protected, but must also be accessible anytime, anywhere, he said.

“Just migrating it is not the issue,” Crawford said. “You’ve got to prepare and condition it to be migrated.”

Until recently, the Army had fallen behind the curve when it comes to understanding what network-related technology is available and how it could be applied to the Defense Department mission, he said, with the growth of software-defined radios being one prominent example.

“It really started to pick up steam right under our noses,” Crawford said. “We were kind of busy, you know, fighting two wars. But I think we missed a strategic shift in the marketplace.”

The Army can’t wait until the last minute to spend money on emerging network-related technology that could prove useful, he noted.

“Our mindset when it comes to modernization is understanding what technological advancements are on the conveyor belt heading our way and starting to set conditions by investing so that when that technology becomes available … the Army is ready,” he said.

The service’s modernization needs are far reaching, he noted.

While many people associate satellites and other space-related communications technology with the Air Force, the Army is the biggest user of space capabilities among the military branches, Crawford said.

The service has more than 2,500 devices that are dependent on position, navigation and timing. A typical Army brigade combat teams has more than 250 satellite-enabled devices, Crawford noted.

The Army wants to tap into industry innovation in satellite communications.

Small satellites, low-Earth orbit constellations and next-generation protected satcom waveforms are just some of the promising capabilities that the service is interested in, he said.

“The Army and its cross-functional teams are open for business when it comes to space-based technology,” Crawford said.

Smartphones to Proliferate Among Dismounted Troops