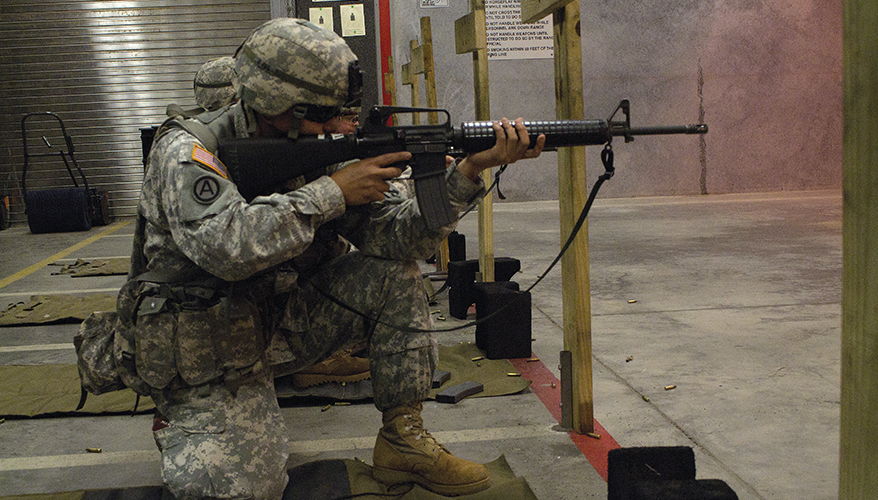 A soldier sends 5.6 mm rounds downrange with his M16 rifle.

“Right now, the feedback looks like we are going to a 6.8 mm round,” Army Chief of Staff Gen. Mark Milley said recently.

The service has a list of its top six modernization priorities and “soldier lethality” is one of the items. The most high-profile program in that category is the squad automatic rifle. Army Secretary Mark Esper at the Association of the United States Army annual conference — while promising the service is speeding up the way it does acquisition — singled out the program as one that would see prototypes in the near future.

“The bottom line is that we are committed to a new rifle,” Milley told reporters.

The 6.8 round would replace the 5.56 NATO round, which would mean two types of ammo for rifles on the battlefield, at least initially, Milley suggested. The 6.8 mm round was first developed by Remington and Special Operations Command. It is more lethal and accurate than the old rounds and 10 percent lighter.

If Milley’s prediction is correct, it would be used in one of six rifles being developed for the squad automatic rifle competition by five contractors. The competitors are: AAI Corp.-Textron Systems; FN America LLC (with two rifles); General Dynamics-OTS Inc; PCP Tactical LLC; and Sig Sauer Inc.

The new rifle is apt to be expensive, so not every soldier will have it from day one, Milley said.

“It’s a very sophisticated weapon. It’s a very capable weapon. And it has an integrated sight system,” he said. It will also integrate into the soldier’s wearable information technology.

“Not surprisingly, with a weapon like that it’s probably pretty expensive. We expect it to be expensive,” he said.

The initial buy would be in the 100,000 range, he said. “We will prioritize those soldiers who are in close-quarters combat type duties such as infantry and armor, cavalry, rangers, Special Forces, combat engineers and maybe selected others in the active Guard and Reserve,” Milley said. Fielding to the remaining forces would spin out from there, he added.

Milley was clearly a fan of the technology.

“This weapon has an accurate range far in excess of any known existing military rifle today. It will fire at speeds that far exceed the velocity of bullets today,” he said. It will penetrate any known body armor or any expected to be developed in the next 25 years, he added.

He hoped to start testing the new weapons at Fort Benning, Georgia, in the summer of 2019.

He added: “We don’t want to speak too much about its technical capabilities because our adversaries watch these things very closely.”

Re: Army Serious About Fielding 6.8 Caliber Round

John at 4:08 PM
Re: Army Serious About Fielding 6.8 Caliber Round

Why not go 6.5 creedmoor? And whats this about "higher velocities than any rifle caliber today"?? Sooo they are making a 6.8 that fires 4000 ft per second??

CapMark2 at 11:25 AM
Re: Army Serious About Fielding 6.8 Caliber Round

Im sure this will be developed with caseless ammo in mind. So troops will be able to carry more ammunition. Look to Russia to follow suit.

Daniel zacha at 1:29 PM
Re: Army Serious About Fielding 6.8 Caliber Round

The nosler has a 6.8 that does over 4,000 ft per second, but im glad their getting away from the 5.56., how many terrorist have lived because of this inferior round.? Good hunting!!!

Daniel zacha at 4:59 PM
Re: Army Serious About Fielding 6.8 Caliber Round

Wow this is interesting. In the Boer war the British used the .303 round due to the need to engage the enemy over long distances. Decades later the wars British and American troops fought typically involved engagement distances of ~100m so smaller, lighter, easier to fire rounds became favored such as the 5.56 we use today. Obviously for the last 2 decades we've been fighting in Iraq and Afghanistan with long engagement distances so it seems that a higher caliber round has come back in favor. I am sure decades from now if / when we have a prolonged serious of engagements it tight cities or in Jungles with short engagement distances we will again be talking about how smaller caliber rounds have advantages in terms of lighter weight to carry, lower recoil and reduced training times on the range. Perhaps its true that we are always preparing for the last war we fought

David Crawley at 12:49 AM
Re: Army Serious About Fielding 6.8 Caliber Round

The proposed new cartridge is unlikely the current 6.8 SPC. Milley stated, "“This weapon has an accurate range far in excess of any known existing military rifle today. It will fire at speeds that far exceed the velocity of bullets today,” he said. "It will penetrate any known body armor or any expected to be developed in the next 25 years, he added.

6.8 SPC does not and cannot deliver this kind of velocity and range performance.

DeltaFiveBravo at 10:23 AM
Re: Army Serious About Fielding 6.8 Caliber Round

General Milley proves that the brass is not the best-informed part of the military. The 6.8 round developed by Remington and the the Army Marksmanship Unit (not SOCOM) is intermediate between the 5.56 NATO and the 7.62 NATO rounds. It is neither more powerful than other military cartridges nor more accurate. It is simply a compromise (as are all small arms), offering more effect from 0-300 meters than the standard 5.56 NATO but with about half the recoil of the 7.62 NATO. It's closest relative is the 7.62x39 AK round. It "fits" in an AR15 or M16 using a unique bolt, barrel and magazine, and is controllable in full auto fire, unlike the 7.62 NATO in a select-fire M14. A typical 6.8x43 (6.8 SPC) with a 16" barrel throws a 110 grain bullet at 2,600 feet per second. By comparison, a 5.56 NATO rifle throws a 75 grain bullet at this speed, and a 7.62 NATO rifle with such a short barrel throws a 150 grain bullet at about that speed.

Deter Naturalist at 10:52 AM
Re: Army Serious About Fielding 6.8 Caliber Round

Why does the soldier in the photo appear to be using his right middle finger to actuate the trigger?

Deter Naturalist at 10:54 AM
Re: Army Serious About Fielding 6.8 Caliber Round

Hope everyone knows that 6.8 mm equates to .270 caliber that came out in 1925 from Winchester, of course this new .270 will have a totally different case. The .270 WIN is THE best for deer sized game, just sayin'!

Don at 9:09 AM
Re: Army Serious About Fielding 6.8 Caliber Round

The 6.8mm round is a waste of money. The bullet is the same weight as the 7.62mm M80A1 bullet so there won’t be a weight savings. The recoil will likely make it hard to control in full auto or bursts. We won’t have common logistics with our allies because they don’t plan to buy all new weapons. The 6.8 round will not penetrate level 4 body armor. There are quite a few brands of level 4 armor on the market.

Edward Randall at 1:03 PM
Re: Army Serious About Fielding 6.8 Caliber Round

Gregd at 12:36 PM
Re: Army Serious About Fielding 6.8 Caliber Round

The new round is far more lethal up close and at further distance than 400 meters. The 5.56 NATO round shown that against in close jungle fighting it does well. In open and spaces, and against deranged, or enemies hopped up on drugs, it's extremely lacking in lethality. Thus the reason for a 6.8 heavy hitter, but soft shooter. The U.S. Army was experimenting with the .276 Peterson round right before WW 2, and found it to be an equal round in lethality to the .30-06 at the time. Now they're coming full circle with another 6.8 (.276) round to enter into combat. .276 and .284 caliber rounds have proven themselves time and again in actual combat, and they are extremely lethal but soft shooters.

Hawk at 9:26 AM
Re: Army Serious About Fielding 6.8 Caliber Round

jim davis at 3:43 PM
Re: Army Serious About Fielding 6.8 Caliber Round

I think many of you are only “thinking inside the box” when it comes to the possibilities here. 6.8 is just a number, diameter in the case. Everyone knows what it can’t be. Speculate what it could be! Think very light for caliber, tough allow projectiles. Think beyond the current propellants found in everyday ammunition. In fact, the projectile could well be self-propelled. If self-propelled, it could be quite a bit longer and heavier than a standard for caliber projectile. Again, quit looking inside the box, we know it’s not 6.8 Rem SPC nor .270 Win!

Justsomeguy at 6:12 PM
Re: Army Serious About Fielding 6.8 Caliber Round

Hi guys,
Some new from Balkans. Supposingly, Serbian Army is (or will be?) the first army that will use 6.5 Grendel. According to Serbian army experts, these are the main reasons:
1. 6.5 Grendel bullets are cheaper, compared to 6.8 mm or existing 7.62x39
2. Slightly better ballistics of 6.5 Grendel and lower recoil (according to our producer Zastava Arms, and Serbian army experts) compared to 6.8 mm (or existing 7.62x39 mm that are still widely used, and stocks of ammunition are full).
3. Large stock of existing Serbian version of AK style assault rifle in 7.62x39 mm, can be easily modified to use both calibers by simply changing the barrel, which is significant saving. Bolt and magazine, and everything else, remains the same. Barrel can be replaced within 10-20 sec. New Serbian Army assault rifle M-17 (or MAR – Modular Assault Rifle) is fully compatible for both rounds, by simple and quick barrel change. (System used for quick barrel change is the same as on the light machine gun M-84/86, which is clone of Russian RPK.) It can be made in several (2 or 3) barrel lengths, in order to have an infantry assault gun, shorter carbine version for special units or armed vehicles crew, but also a gun for designated marksman with the longest barrel. All in one caliber, 6.5 Grendel.


Misha at 9:14 AM
Re: Army Serious About Fielding 6.8 Caliber Round

Ugh. Destined to fail: complicated, expensive and rare. Logistical nightmare. Aren't we planning to fight in mega cities? We are just not good at buying stuff.

Reader at 8:02 AM
Re: Army Serious About Fielding 6.8 Caliber Round

Certainly is not 6.8mmSPC. That bullet itself is too short to be aerodynamically optimized and too slow to be game changing and defeat body armor. My best guess is something like 270 Winchester short magnum or 300 Ruger compact magnum. These types of cartridges give you extreme velocities with the same bullet mass as standard cartridges. These bottle like cartridges can get you 3700fps with 90-130 grain bullet. So far only been used in bolt action rifles, but a semi and full auto version would be cool.

Tyler at 12:39 PM
Re: Army Serious About Fielding 6.8 Caliber Round

Maybe after this is done, the military can take a few dollars and invent an RPG. We've had LAWs, TOWs, and a few other infantry squad level 'support' weapons, but the fact is, 60 years after it's introduction, nothing touches the RPG for ease of use, easy to teach to use, carry weight, or lethality. It was about the most terrifying thing we faced in Vietnam 60 years ago, and it remains a great weapon today.