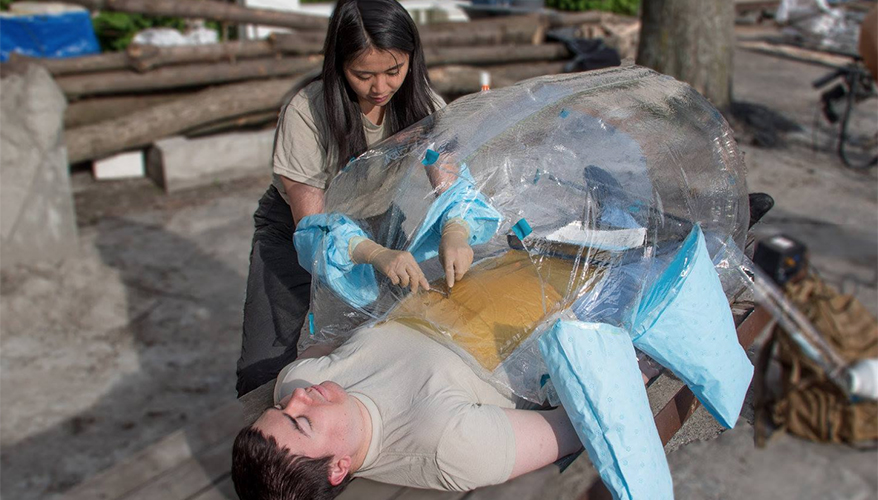 A portable operating room could bring a safe, sterile surgical environment to the front lines of conflict zones.

SurgiBox is a collapsible tent-like structure that uses a pump to inflate and create safe operating conditions for patients in need of surgery, Mike Teodorescu, CEO of SurgiBox, told National Defense at the Association of the United States Army’s annual conference in Washington, D.C.

The product was introduced during an Army prize competition created to help the service tap into developing technologies, officials said Oct. 8

After SurgiBox is inflated, a skin-like adhesive attaches to the patient, creating a self-enclosed environment around the portion of the individual undergoing surgery. The healthcare provider then stands outside the box and operates through gloved sockets, Stephen Okajima, chief technology officer at SurgiBox said.

“We built this for safe surgery … in a military environment there is no infrastructure for any type of surgery and in third-world areas, you don’t really have that either,” Okajima said.

The product, which can be carried in a regular-sized backpack, uses the air from the pump to keep the environment sterile which protects the patient from exposure to airborne materials, according to SurgiBox.

Following feedback from the military and other company partners, SurgiBox will finalize its design and seek approval from the Food and Drug Administration, Okajima said.