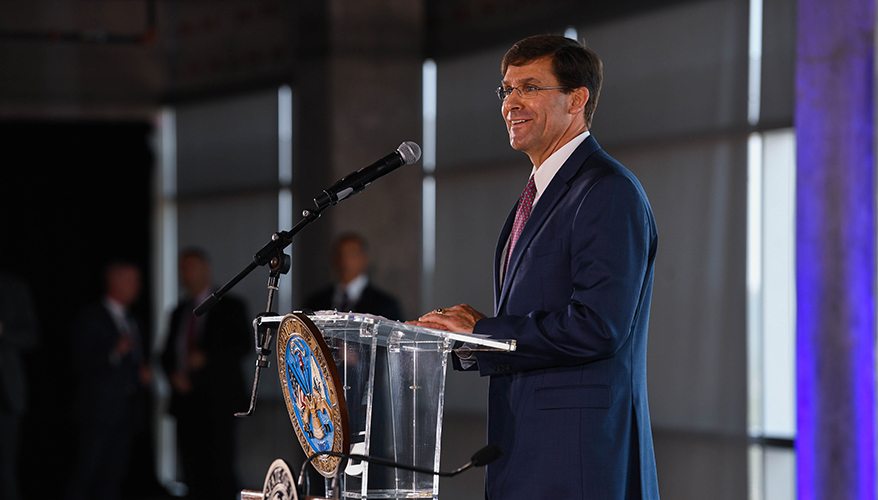 Secretary of the Army Dr. Mark T. Esper speaking during the activation of the Army Futures Command, Aug. 24, 2018.

For those who have attended the Association of the United States Army's big annual October conference in Washington, D.C., 2018 marked a change from the rhetoric of years’ past.

The services often come to these big trade shows with a message, and for many years, the theme at the AUSA event was fairly pessimistic. A decade of budget instability and a lack of funding left the Army with tough choices to make: modernization accounts were sacrificed for readiness.

But this year’s message seemed to be: “We’re fine. Thank you very much.”

Army Secretary Mark Esper declared in a keynote speech to open the conference that there was an “Army renaissance.”

Larger budgets and a Congress actually managing to pass a budget on time this fiscal year has no doubt helped the Army’s new outlook, but that is not the whole picture. There is no guarantee that the good times will continue, so the service seems to have adopted the old adage: “the Lord helps those who help themselves.”

Army Chief of Staff Gen. Mark Milley at the 2016 conference announced the multi-domain battle concept, which called for the service to dominate in not only land, but sea, air, space and cyberspace as the world re-enters an era of great power competition.

Since last year, the Army has both refined the new doctrine, and reformed its acquisition processes. It formed eight cross-functional teams centering on the six priorities and opened the Army Futures Command in Austin, Texas, which is tasked with tackling modernization.

Meanwhile, Army officials over the past few months have talked about a budget drill where they have gone through every program with a fine-toothed comb looking for savings. That includes programs big and small and only costing a few million dollars or that only have a few personnel assigned to a handful of billets.

Esper announced Oct. 8 that $25 billion over the next five budget cycles has been found so far, and that the drill wasn’t over. That money will be put toward the service’s top six modernization priorities.

These savings, or so-called “bill payers” for the top six, must be approved by Defense Department leaders and then by Congress. Esper is being tightlipped about what programs might fall under the ax, and said they won’t be revealed until the budget is released next year.

But the plan has one major player in its corner: Deputy Secretary of Defense Patrick Shanahan came to the conference and declared that he liked what the Army was doing.

“When it comes to reform the Army is serious and focused. Instead of saying, ‘slow down,’ they are pushing to go faster,” he said.

Later, to a small gathering of reporters, he admitted that the budget drill may not always be smooth. “Anytime you are making a transition, it is emotionally difficult and there are lots of constituents, so you have to anchor to what’s important,” he said. The department is mindful of industrial base issues and that a small program with a small contract may mean a lot to a small business, he added.

Shanahan in his speech mentioned two of the Army’s notable failures: the Comanche helicopter and Future Combat Systems. Both were cancelled after the Army failed to deliver on its promises and both involved Boeing, where Shanahan worked as an executive.

The Army has not emerged from the two programs’ shadows when it comes to its reputation and critics rarely fail to mention them. Shanahan said the Army must make the acquisition system work for it. “We can’t use its deficiencies as an excuse. We must use our acquisition system to solve problems.”

The spotlight will now be on the Futures Command to see if it can deliver. Can the Army not only talk the talk, but walk the walk when it comes to delivering capabilities its soldiers need in a timely manner?

“They have stood things up but now it is really time to get into the nuts and bolts of the approaches” the command is going to take, Shanahan said.

There are some goalposts. Esper said there will be prototypes “in the next few years” for the next-generation combat vehicle, the squad automatic weapon, mobile short-range air defense systems and a strategic long-range cannon.

Congress, the press and the critics will be watching these four programs closely to see if the Army’s new found optimism is warranted.