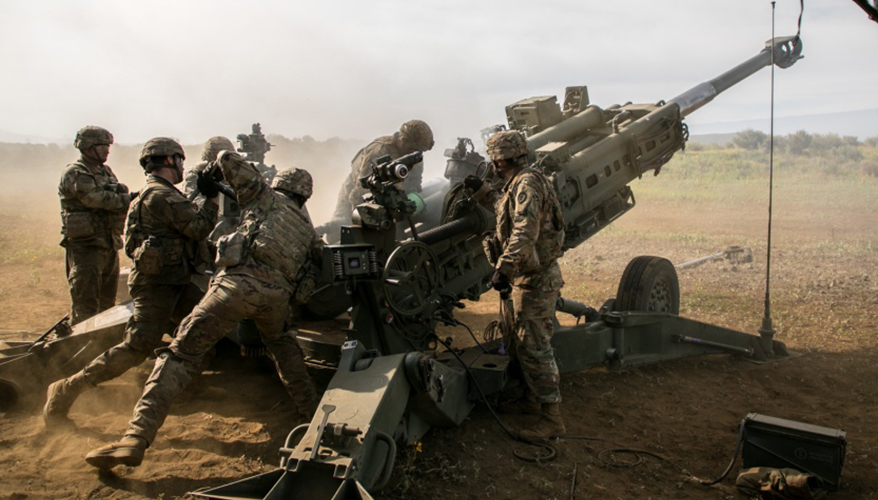 Thwarting enemy standoff capabilities will be key to winning future battles, according to an updated Army multi-domain operations concept set to be released in November.

The concept titled, “The U.S. Army in Multi-Domain Operations 2028,” is an update to a multi-domain operations concept first released last year, and will lay out a series of solutions to defeat “layered” enemy standoff capabilities, Gen. Stephen Townsend, the head of the Army’s Training and Doctrine Command, wrote in the foreword of an advance summary of the concept.

“Today, the Army, as part of the Joint Force, maintains its dominance across the domains of land, air, sea, space and cyberspace,” he said. “Tomorrow, near-peer adversaries will employ layered stand-off capabilities during competition and armed conflict, with the intent to reduce the United Sates’ strategic depth, limit our ability to project power and contest the Joint Force in all domains.”

The concept is threat-based and focuses principally on Russia and China as they invest in anti-access/area denial technology, said Brig. Gen. Mark Odom, director for concept development and learning at the Army Capabilities Integration Center, which is nestled under TRADOC.

“When we wrote [the first] multi-domain battle [concept] and published it last December, we only used the term anti-access/area denial once in the entire concept and we elected to use it … a lot with this concept,” he said during a briefing at the Association of the United States Army’s annual conference in Washington, D.C.

While A2AD technologies do not create “impenetrable bubbles,” they do provide a significant challenge for U.S. forces, he said.

“How does the joint force penetrate multiple layers of standoff?” he asked.

The Army is taking a “fairly liberal” definition of the term “standoff,” he noted. Not only does it include technology, but it also encompasses political standoff, he added.

“Russia and China are trying to separate us politically, fracture alliances, create ambiguity that creates the right force ratios for them to be successful,” Odom said.

They use diplomatic and economic measures to support their information operations campaigns as well as unconventional warfare and they underpin those with large conventional components, he said.

There are four interrelated trends shaping competition and conflict, the summary said. These include adversaries contesting the United States in all domains; smaller armies fighting on an expanded battlefield that is “increasingly lethal and hyperactive;” nation-states having difficulty imposing “their will within a politically, culturally, technologically and strategically complex environment;” and near-peer states more frequently competing below armed conflict — the so-called gray zone warfare tactics.

“Adversaries have leveraged these trends to expand the battlefield in time (a blurred distinction between peace and war), in domains (space and cyberspace), and in geography (now extended into the strategic support area, including the homeland) to create tactical, operational and strategic standoff,” the summary said.

In the foreword, Townsend noted that the central idea of the concept is to use the “rapid and continuous integration of all domains to deter and prevail as we compete short of conflict,” he said.

However, should deterrence fail, Army formations operating as part of a joint force must penetrate and disintegrate enemy A2AD systems, exploit the resulting freedom of maneuver to fight and win, and finally consolidate gains “to force a return to competition on terms favorable” to the United States, he said.

The three tenets of the concept are calibrated force posture, multi-domain formations and convergence across time, space, capabilities and domains, he noted.

Townsend added that the forthcoming concept is not the final word on the issue, but an “evolution of a larger effort to develop and revise Army thinking and requirements” as it faces advanced adversaries.

GPS Alternatives: Another Conundrum for Army