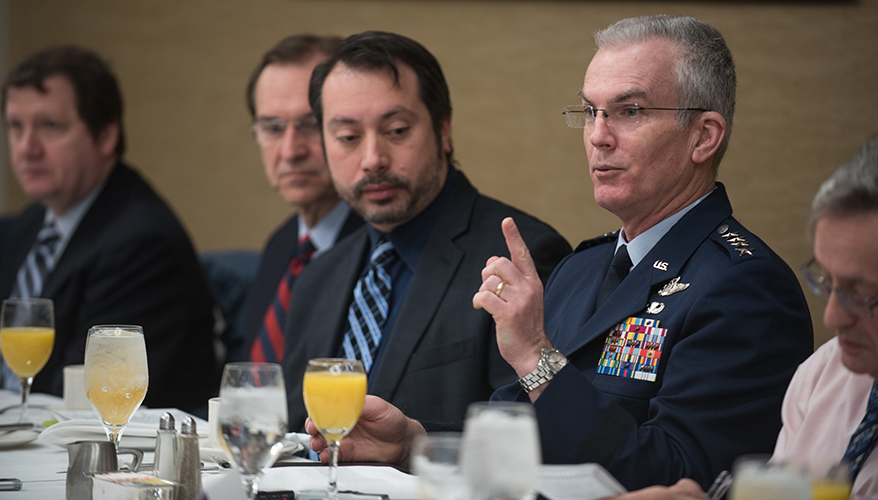 The United States needs to have low-yield nuclear options in place to effectively deter an adversary from engaging in a limited strike against the homeland or allied nations, the vice chairman of the joint chiefs of staff said Jan. 30.


The push for increased low-yield capability — which is expected to be included in the forthcoming nuclear posture review — is intended to raise the threshold of a potential attack, Air Force Gen. Paul Selva said during a meeting with reporters in Washington D.C. “It’s to present hedges, and also to present options to our leadership that actually prevent our adversaries from thinking they can take advantage of us.”


A recently leaked pre-decisional draft of the nuclear posture review indicated the United States would pursue “supplements to the [warhead] replacement program to enhance the flexibility and responsiveness of U.S. nuclear forces” in the shape of low-yield options that could match new warheads being developed by Russia and other peer competitors. Though the leaked document, first published by HuffPost, led some to believe this is a change from previous Pentagon thinking, Selva said it is in line with how the services have pursued nuclear deterrence in the past.


"We’ve had low-yield nuclear weapons in our inventory for decades, so having low-yield weapons does not in and of itself lower the threshold for use," he said. The United States needs to raise the stakes for countries such as Russia — which possesses “thousands” of these types of weapons — that might consider employing them, he added.

Selva said the Pentagon is not planning to build “new warheads,” but did not elaborate on the nature of additional low-yield options that might be pursued.


The final version of the nuclear posture review — which is expected to be released Feb. 2 — won't mark a radical departure from previous nuclear policies, he suggested. It is “largely consistent with our thinking about nuclear deterrence going back 70 years,” he said.

Selva disputed recent suggestions that the document would encourage the United States to respond to a cyber attack with nuclear force, effectively lowering the threshold for a decision to strike an adversary.


“The people who are saying … we want these low-yield nuclear weapons so we can answer a cyber attack because we’re so bad at cybersecurity, that’s just fundamentally not true,” he said.

The document says the U.S. military “reserves the right to use nuclear weapons when our national interests, our population or infrastructure are attacked with significant consequence,” he noted. That position is not new, Selva said. What has changed this time around is the addition of a declarative statement saying such an attack could include non-nuclear strategic strikes on the command-and-control systems and indications and warning systems of the United States or its allies, he noted.


“All we did was add one sentence of qualifying language and it has been interpreted as, ‘You’re going to use this if there’s a cyber attack,'" Selva said.


Nuclear modernization is a key component to U.S. military efforts to maintain its technological edge against near-peer competitors, Selva said. The Pentagon recently released its new national defense strategy, which stated that the global great power competition between Russia, China and the United States now represented the biggest threat to U.S. national security.


Russia and China have each been building new nuclear delivery systems and warheads over the last several years, Selva noted.


“The capability of the Russian and Chinese nuclear arsenals is actually getting better against ours, which is remaining relatively static,” he said. Even the Pentagon's planned modernization efforts — including the B-21 bomber, the Columbia-class ballistic missile submarine, the ground-based strategic deterrent and the long-range standoff cruise missile — would only make “modest improvements in the delivery systems and the actual survivability of the enterprise,” he added.


The United States must also regain its advantage in hypersonic missile technology against Russia and China, Selva said. The Chinese are spending “up to hundreds of billions” to solve the problem of hypersonic flight, target designation and engagement, he added. “We’ve taken a different approach, which is to come up with a family of hypersonic systems that work, without necessarily trying to close all of the technology pieces in the front end.”


The Defense Department is currently working on ways to ensure that the airframe is survivable and maneuverable. Improving targeting is “something that will happen later in the development of the technology,” he noted.


Currently, the emphasis is on developing a weapon that can go after both fixed and moving targets, though the latter is more difficult to achieve, Selva said. “That is a really tough kill chain problem with a lot of technological pieces between wanting to do that and being able to do it.”


He noted that developing a hypersonic manned aircraft is probably not in the cards.


“That is a question of, can you scale hypersonics — small, highly maneuverable, high G, sturdy machines — to make something you would put a human in? And I’m just not sure that one would invest the money to make that transition,” he said. “When you can make weapons hypersonic, it’s probably not a requirement to make [manned] platforms hypersonic.”


The Defense Advanced Research Projects Agency and the Navy are both working on advanced hypersonics research and development, Selva said. He would not comment on what role the Air Force is playing in advancing the technology. The Air Force Research Laboratory is a partner, along with DARPA, on several programs to develop a high-speed strike weapon, including the hypersonic air-breathing weapon concept and tactical boost glide, National Defense has previously reported.


The lab is also partnered with NASA and Australia’s Defence Science and Technology Group on the hypersonic international flight research experimentation program, which aims to perform several flight experiments using free-flying gliders at a low cost.

Correction: This article and its headline have been updated to reflect Gen. Selva's comments that the Pentagon is not planning to build entirely new nuclear warheads as part of the forthcoming nuclear posture review.