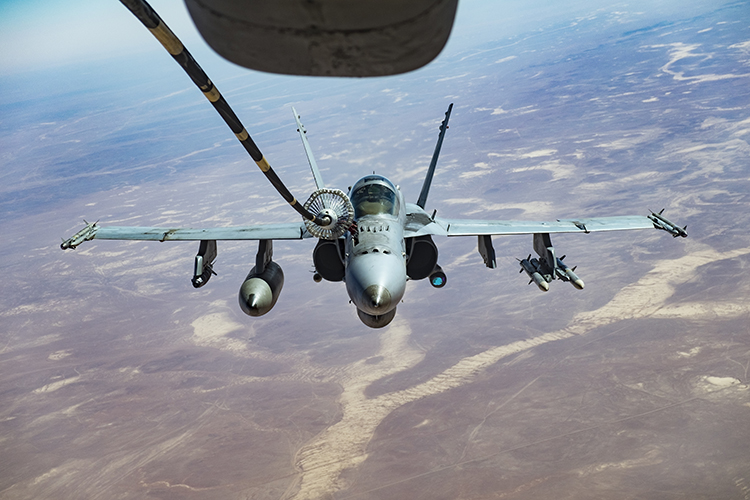 An F/A-18C Super Hornet receives fuel from a KC-10 Extender.

The Marine Corps is working to address severe aviation readiness problems that have been blamed for multiple crashes and emergencies, the service's commandant said Jan. 25.

Readiness is below steady-state requirements across the board, according to the Marines' 2018 aviation plan. Last week, Speaker of the House Rep. Paul Ryan, R-Wis., said roughly 80 percent of the aviation units lack the minimum number of full-mission capable planes.

"Aviation is probably the most challenging readiness picture" that the service faces, Marine Corps Commandant Gen. Robert Neller said during remarks at the Center for Strategic and International Studies in Washington, D.C. "Our problem right now is not number of airplanes per say, it’s just getting the airplanes we have flying.”

The service needs to speed up the acquisition of spare parts, he noted.

Accidents have been on the rise recently. Last year, the force suffered 12 Class A mishaps, meaning that they either led to fatalities or over $2 million in damages. However, the majority of the accidents “were not the result of the materiel condition of the airplane," Neller added.

Improving pilot training is critical, he noted. The average number of flying hours per month for each pilot is now between 11 and 16, he said. The service is working to improve the situation. "We know we’ve got to fly more," Neller said.

Readiness will remain a persistent challenge as legacy aircraft in the inventory — such as the F-18 Hornet — continue to age, the aviation plan said.

As more F-35 squadrons are fielded, the service will eventually reach a “tipping point” that will lead to the retiring of older aircraft like the Hornet because “at some point ... we’ve got more airplanes than we need,” he said.

Meanwhile, budget unpredictability is hindering the Marine Corps' efforts to dig itself out of its readiness hole, Neller said.

The Marine Corps and the rest of the Defense Department are still waiting for Congress to pass a full-year appropriations bill for fiscal year 2018. Nearly four months into the fiscal year, federal agencies are still operating under a continuing resolution. The latest one was recently passed after a three-day government shutdown.

The Pentagon's fiscal year 2019 budget request is expected to be released in February. The Marine Corps’ portion contains “a lot” of funding for modernization efforts, Neller said.

JUST IN: Marine Corps Aims to Buy Reaper Drones in 2020