The Navy is on the lookout for new, advanced counter-mine technology as a number of its legacy systems age, service officials have indicated.

Many mine countermeasure platforms — such as some airborne systems — were slated for retirement years ago, yet continue to be used in operations, said Neal Kusumoto, technical director of mine warfare at the Surface and Mine Warfare Development Center.

Maintaining them is challenging, but the work must go on until new technology — such as the littoral combat ship’s mine countermeasure mission package, which has faced delays — comes online, he said during a panel discussion at the National Defense Industrial Association’s annual Expeditionary Warfare Conference in Annapolis, Maryland.

Today’s contested environments include places like the South and East China Seas, the Persian Gulf, the Red Sea, the Gulf of Aden, the Baltic States and the Eastern Mediterranean, he said.
Maj. Gen. David Coffman, deputy commanding general of I Marine Expeditionary Force and commanding general of 1st Marine Expeditionary Brigade, said when it comes to new mine technology, “we need it cheap, we need it fast.”

The threat of mines is growing globally, he noted. “It is an asymmetric advantage that our enemy is trying to leverage and directly affects our maneuverability and our assets,” he said.

The Navy employs a number of different mine countermeasures. One includes the use of the MH-53E Sea Dragon, which can be operated from aircraft carriers and other Navy vessels. The platform can tow a variety of mine-hunting systems such as the Mk 105 magnetic minesweeping sled, the AQS-14A side-scan sonar and the Mk 103 mechanical minesweeping system, according to service documents.

However, the aircraft are rapidly reaching the end of their service lives, he noted. Currently, the program office is pursuing an in-service sustainment strategy that will extend its life to 10,000 flight hours through the 2025 timeframe. The strategy addresses fatigue, obsolescence, readiness and safety issues, according to the Navy.

“We’re flying them, they’re working, we’re burning hours on … the airframes,” Leavitt said. “When they get to 10,000 hours they go away. You can’t fly them anymore. The last thing you want to do is extend the life of what will soon be a nearly 40-year-old aircraft.”

“It suffered through that immensely — breakdowns in supply chains, breakdown in manpower,” he said. “We spent a lot of money and effort getting them healthy again.”

The platform’s retirement is meant to coincide with the achievement of full operational capability of the littoral combat ship’s mine countermeasure system package, but that has faced delays. Other options include the use of the MH-60 Sierra, he noted.

“The hope is that … [the] LCS MCM mission package and the MH-60S … that are delivered replace the capability that the MH-53E provides in conjunction with expeditionary MCM and surface mine countermeasure assets,” Leavitt said. “But you can see we get to the point here in the not-too-distant future … where we simply do not have the assets in the pipeline to do what we’re doing right now.”

The LCS mine countermeasure mission package includes the employment of aircraft and unmanned surface, semi-submersible and submersible vehicles that employ a variety of sensors that can detect and neutralize mines, according to Navy documents.

The systems have faced delays and criticism from government agencies. A December 2016 report from the Pentagon’s director for operational test and evaluation that assessed fiscal year 2016 weapon programs, said: “The ability of LCS to perform the bulk of its intended missions … depends on the effectiveness of the mission packages. To date, the Navy has not yet demonstrated effective capability for the MCM.” 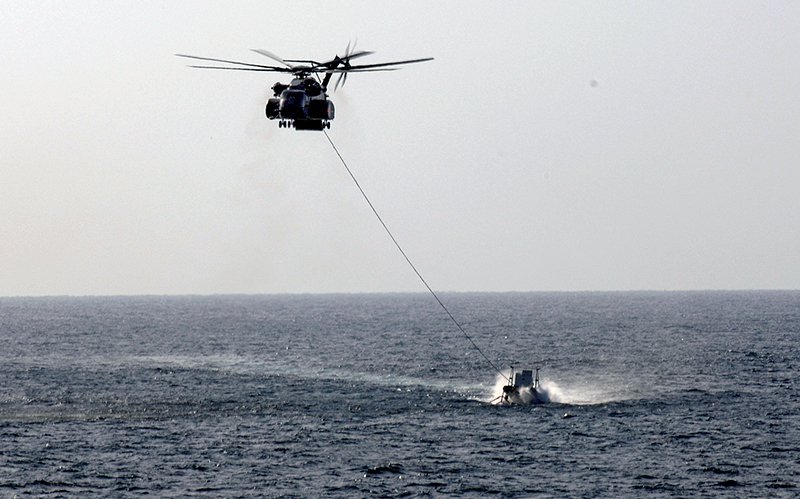 The service is currently replacing the remote multi-mission vehicle — which towed the AQS-20A sonar — with an unmanned boat, the report said. “The new boat rides on the surface of the water as opposed to the semi-submersible RMMV,” it noted.

“Program officials state the boat will be easier to launch and recover but could be susceptible to wave-movement, which may make it more difficult to find mines,” it said.

During the expeditionary warfare conference, Rear Adm. John Neagley, program executive officer for littoral combat ships, said across the future years defense program, his portfolio has about $4 billion dedicated to mine warfare.

The Navy is currently employing a hands-on approach with mine countermeasures, he said.

“We get a lot of data by pushing systems out and learning from an operational environment how the system” works, Neagley said. “We are going to continue to do that. … We are going to move forward, get systems out there, get them in the hands of the operator, learn from them quickly, adapt and accelerate.”

The mission package is slated to achieve initial operating capability in fiscal year 2021, according to a report by the Congressional Research Service, “Navy Littoral Combat Ship Program: Background and Issues for Congress,” written by Ronald O’Rourke.

It noted that two components of the package achieved IOC in fiscal year 2017 and additional packages will reach the milestone in 2019 and 2021.

Despite the sundown of aging systems and delays with the LCS package, there is increased attention on mine countermeasures within the Navy, said Kusumoto of the Surface and Mine Warfare Development Center.

“We have a lot of interest and a lot of emphasis on mine warfare,” he said. “Right now we’re on an upswing.”

The Navy is looking for technologies that can be used for the most challenging mine countermeasure missions, he noted.

“MCM is difficult in any environment. It’s particularly hard for amphibious operations in very shallow water, in beach settings,” Kusumoto said.
Mine countermeasure platforms must be able to operate in GPS-denied environments and be interoperable, he said. Additional unmanned systems, better sensors and improved power and portability are also needed, he added.

Despite employing aging systems, the U.S. military does have a significant capability, Coffman said. However, it is a challenge to keep up with the adversaries’ ability to evolve their technology rapidly, he noted. Another “gigantic” problem is the systems can be costly to maintain.

The nation faces many threats when it comes to mine warfare, Miller said. Iran, in particular, has thousands of mines that it could deploy up and down its coast in the Persian Gulf, he said. The nation has threatened in the past to close the Strait of Hormuz, an important strategic waterway for international trade.

“It doesn’t mean that they are going to go out one night and … [place] a gigantic minefield in the Strait of Hormuz,” he said. Instead, they might place mines throughout the Persian Gulf in certain deepwater channels where large vessels sail, he added.

The U.S. 5th Fleet’s area of operation — which includes the Persian Gulf and the Red Sea — makes it a good place to experiment with new mine countermeasures, Miller said.
It “represents one of the harshest environments in the world,” he said. “It is the combination of that harsh environment and potential high threats that makes it the ideal place to test cutting-edge technologies.”

While countermeasures are of critical importance, the United States must also invest more in its offensive capabilities, Miller said.

“The U.S. Navy’s strategic objective must be to make our adversaries worry about our … [mines] as much as their mines concern us,” he said.

Coffman agreed with the sentiment. “Why don’t we make our own asymmetric threats?” he said. “We’ve got to get after it.”

Since the USMC’s VH-92 “Marine One” is now a Program of Record, if I were the USN, I would jump aboard that program to replace the aging CH-53E “Sea Dragons.” The MH-60S just doesn’t have the size, range, and power to tow the anti-mine sleds compared to a S-92M which is cheaper than the USMC’s CH-53K.

Personally, I think the USN kind of got the MCM equipment narrow-minded. The LCS USS Freedom class has a drive-on stern boat ramp. Why doesn’t the USN develop some non-magnetic wooden “ducks” with wheels to drive off the stern ramp and then deploy ROVs that way, kind of like those nesting Russian dolls stacked up one on top of the other? The USS Independence class could deploy a stern ramp as well with the crane for anti-mine vehicles. I think there could be more innovative ways to combat mines than just UUVs and RIBs.