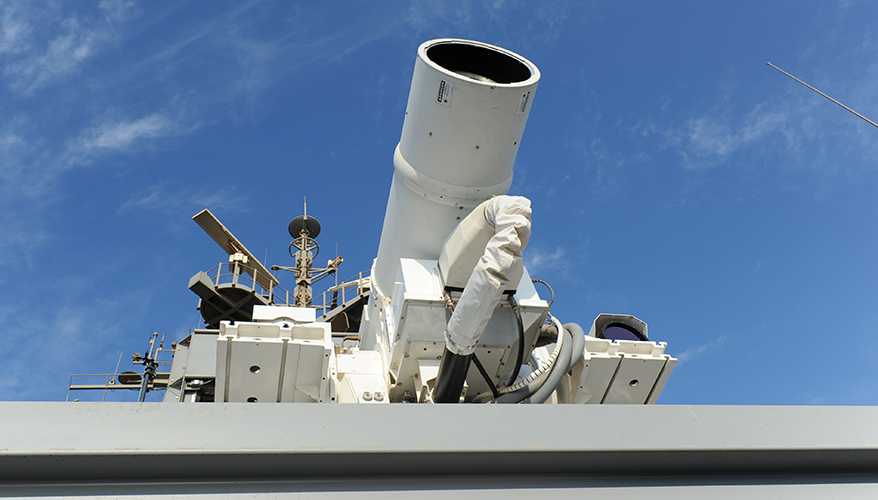 Placing a high-energy laser weapon on a ship is “easier said than done,” said a Navy official. Nevertheless, the service is methodically moving toward the day when directed energy weapons are part of its arsenal.

“A high-energy laser is not fully effective unless it is fully integrated across the ship and the combat system,” Capt. Godfrey Weekes, commanding officer of the Naval Surface Warfare Center Dahlgren Division, said Jan. 10 at the Surface Navy Association national symposium in Arlington, Virginia.

Placing a laser weapon aboard a ship is easier said than done because the Navy operates in an “unforgiving environment,” he said. “You have sea spray, humidity, waves slapping as you make your way up to northern waters. Those systems have to survive that.” There are also the shocks produced by conventional weapons, the gasses they produce and the electromagnetic environment associated with radars and other high-tech systems aboard the ships, Weekes said.

Then there is the power problem. Firing a high-energy laser creates an energy pulse load throughout the ship. It is a complicated integration problem, he said.

“Some of our sister services say, ‘Hey, the Navy has it easy when it comes to integrating a laser on a ship.’ They say, ‘You have all of that space to bring that capability. It’s nothing like a tank or a jet.’” But some of these ships have to accommodate 369 sailors, along with supplies and fuel. There isn’t as much space as one would think, especially when trying to place the weapon on an already existing ship, Weekes said.

“Doing it with modularity and flexibility up front allows our mission to bring future capabilities to the forefront,” he said.

The Navy with great fanfare tested the 30-kilowatt Laser Weapon System, or LaWS, aboard an amphibious transport dock ship in the Persian Gulf in 2014. Earlier in the conference, a Navy official announced a follow-on to LaWS would be installed this fall aboard a new San Antonio-class amphibious ship, according to Defense News. He did not specify how powerful the new weapon would be.

Rear Adm. Paul T. Druggan, commander of the Naval Surface Warfare Center, said there is a step-by-step plan in place to integrate the technology aboard ships.

“The bottom line is we have now reached the point in laser development — particularly solid-state laser development — where we can get military utility out of that,” Druggan said. That means they can have an effect on an adversary’s system at an appropriate distance. Those effects can range from denial of battlespace, to interference in adversaries' systems or kinetic effects, he said. This flexibility makes lasers an attractive option, he said.

The Navy has different development paths with different directed energy capabilities, Druggan said. Each has its own development timeline that are separated by power level.

Weekes said the spectrum goes from a low range that may only deliver a nonlethal “dazzling effect” to 50 to 60 kilowatts and upwards to a 150-kilowatt laser currently being worked on at the Office of Naval Research.

Once the Navy research-and-development community has matured a laser technology it hands it over to program executive office integrated warfare systems, which will turn them into programs of record, Druggan said.

Weekes noted that laser weapon technology has been designated a rapid prototyping experimentation and demonstration initiative, which allows it to move on an accelerated acquisition timeline.

Re: Navy on Steady Path to Integrate Lasers on Warships

High energy that can effect a large swath of space seems every bit as useful as high energy concentrated on a point. I see it as similar to multiple radars operating at different wavelengths.