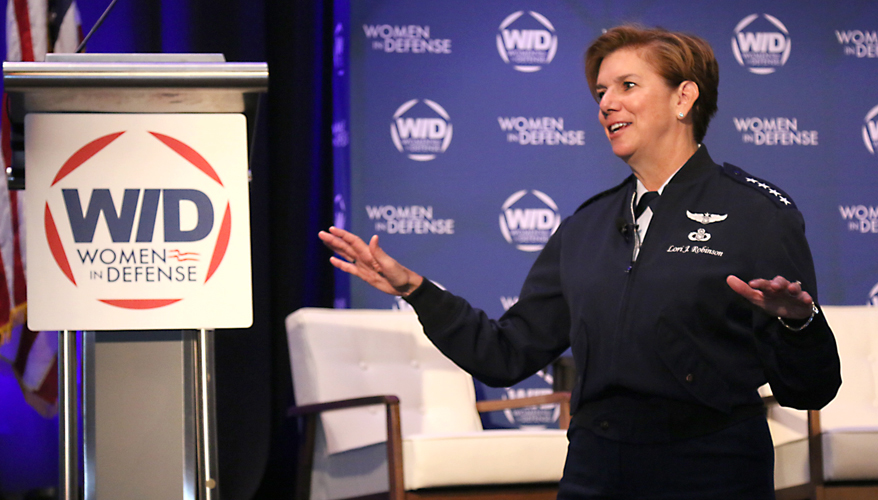 The United States is currently capable of countering potential attacks from foreign adversaries, but it cannot slow down on building its capacity and readiness, the commander of U.S. Northern Command and North American Aerospace Defense Command said Sept. 27.

“I am entirely confident in our ability to defend the United States, but that doesn’t mean we stop here,” said Air Force Gen. Lori Robinson.

Northcom and NORAD are focused on North Korean leader Kim Jong-Un and his efforts to develop nuclear-armed missiles, she said at the Women in Defense’s National Conference in Washington, D.C. Women in Defense is an affiliate of the National Defense Industrial Association.

“The amount … that he’s increased in his capability and capacity has been amazing,” she said. “If we see that he’s tested over 30 percent more than his father and grandfather combined, and if we look at the speed … that he does the testing, and [that] he’s not afraid to fail in public, we should worry and I know we are.”

To beef up its missile defenses, the United States must continue to develop more discriminating sensors, ensure the reliability of kill vehicles and secure its ground-based interceptor arsenal, she said.

“That’s one of the things I know they’re … looking at,” she said. The outcome of the review could impact her command’s portion of responsibility for the system, she added, but emphasized that the department is “still in the middle” of making conclusions.

Northcom is also looking at areas that could benefit from multi-domain command and control, Robinson said. Air Force Chief of Staff Gen. David Goldfein has frequently noted in public appearances that it is a key area of effort for the service.

Northcom and NORAD have “a nice architecture in place” for command and control from a missile defense perspective, she said. “But obviously there are places where that is aging out” and a multi-domain approach could provide a longer lifespan for some capabilities, she added.

NORAD is working with the United States and Canada to determine the path forward for the aging North Warning System, a joint U.S.-Canadian early warning system used for the air defense of North America, Robinson said.

The allies need this type of system as Russia has stepped up its aggressive tactics around the globe, and is building capabilities that could target the homeland, she said. Her command has begun an analysis of alternatives with U.S. Air Combat Command to determine how to proceed, and expects to release findings by winter 2017 or spring 2018, she added.

“I need to be able to detect, track, ID and engage at ranges that defend Canada and the United States in the air domain,” she said, noting that the Russians are working on capabilities that can hold targets at risk “at ranges we are not used to.”

Robinson is also paying attention to Iran “to make sure that we are correctly postured should they change their capability and act in a new capacity,” she said.

The Middle Eastern country does not pose an immediate threat to North America, but the United States must pay attention to the space launch vehicles and other technologies that Iran is developing which could potentially threaten the homeland in the future, she said.

Robinson and her staff have also provided support to the multiple disaster relief efforts happening throughout the country and region, including in Texas, Florida and Puerto Rico after successive hurricanes ripped through the areas. Multiple earthquakes in Mexico and blazing wild fires on the west coast of the continental United States have also posed challenges.

The command has thus far had access to the tools it needs to support all of these missions, Robinson said. But she has spoken with Marine Corps Gen. Joseph Dunford, chairman of the Joint Chiefs of Staff, to assess the lessons learned from the experience and determine what capabilities and technologies might be needed in the future, she said.

“We haven’t caught our breath yet. … But it’s definitely something I want to turn around and look at, because I think there will be some things that we’ll be able to learn,” she said.

Missile Defense Day on the Hill