Machine Intelligence and Human Ingenuity Can Achieve the Impossible 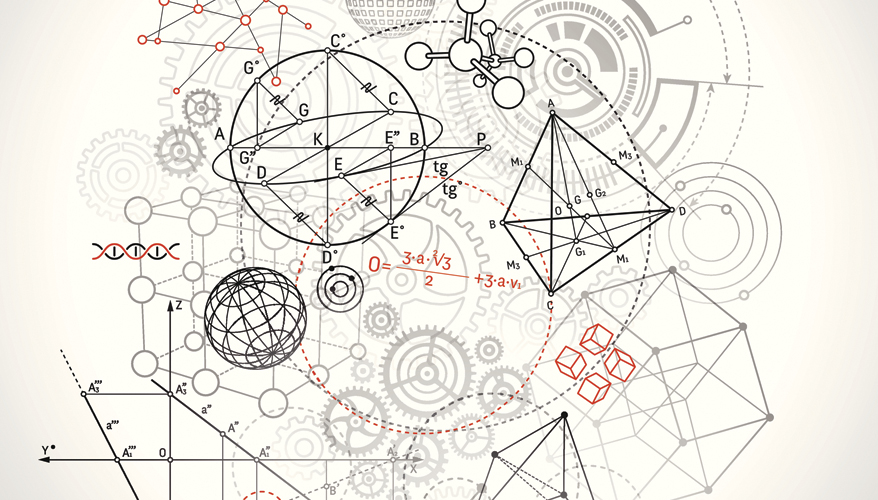 This is an adapted excerpt from The Mathematical Corporation: Where Machine Intelligence and Human Ingenuity Achieve the Impossible Copyright © 2017. It is available from PublicAffairs, an imprint of Perseus Books LLC, a subsidiary of Hachette Book Group Inc.

Imagine flying over a major city at night — say, Chicago or Paris or Beijing — and it is completely dark below. It is just a void of light akin to nighttime in the middle of the ocean.

Then imagine someone flips on the power grid, and you see today’s web of human activity light up. Imagine further that someone flips the switch again, and you glimpse a future image of the city. Where you once thought there was nothing, there is a universe of action — both present and future. Enormous detail radiates from the darkness, and you perceive and envision features you never knew existed.

This ability to “flip the switch” to see formerly hidden details and vital insights about the future expresses the potential of the mathematical corporation. Thanks to leaps in technology, we can get a new fine-grained, high-resolution picture of aspects we could never distinguish before. With machine intelligence, built on the bundle of technologies known as data science, we can see patterns, anomalies and associations that were previously cloaked in obscurity.

But this ability stems not just from technology. It also results from a new form of leadership — the type of leadership that illuminates the darkness by shattering constraints on thinking.

There was the rigid belief that the best decisions always result from intuition and experience. As these constraints — those recognized and those unrecognized — fall, every system and business process in an organization will reverberate with change. Every strategy in every industry will fundamentally shift.

Five years ago, we set out to discover how technology combined with new forms of leadership and faster innovation would affect business, government and nonprofit organizations. After researching hundreds of organizations, we have distilled the elements that comprise the model of the winning organization of the future — organizations we call “mathematical corporations.”

The mathematical corporation does not just look back at what successful companies have done. A backward look cannot hold the secrets to future results, because new technology and thinking create breakthroughs that couldn’t be conceived in the past. A forward look, revealed through examples of pioneers experimenting on the horizon, is the roadmap to success.

Indeed, a forward look reveals required skills, emerging strategies, innovative technology, and lessons learned about cultivating talent and organizational change. This forward look provides a guide to thinking and acting as a leader, in particular, developing what we call “future power.” This is the ability to apply specific leadership techniques in league with data science technologies to see possibilities and shape the future.

Kevin Coggins, a civilian senior executive in the Army, provided an example. Coggins is in charge of the technology to ensure reliable positioning, navigation and timing, or PNT. Soldiers, weapons, machinery, vehicles, airplanes, ships — just about everything — that relies on advanced technology cannot operate without foolproof PNT.

For decades, the military has relied on GPS systems to supply time and position. Some vehicles have accumulated as many as a dozen different GPS systems, each one added as an accessory. But in today’s world, the system has become susceptible to signal blocking and spoofing. Some jamming devices go for as little as $29 online. That means Coggins and his team cannot ask soldiers, sailors and pilots to rely on GPS signals alone.

And that requires breaking not just a technological frame but a management one. In the last couple of years, Coggins has had to replace most of his staff and retrain the rest because many people continued to operate as if the military could still run its ships, planes, vehicles and handheld devices via a traditional GPS signal. His team now includes data scientists who can work with complex data streams — real or spoofed — to sense and reinterpret bad signals and provide good ones.

“There were entrenched personalities,” says Coggins. “So we brought in people with whole new mindsets.” He had to challenge the whole organization to think of PNT in a broader way. His goal: supply assured PNT, processed with machine intelligence and supported with new location technologies, without service members ever knowing machine intelligence had intervened to keep them oriented and operational.

No organization today is a mature mathematical corporation. That’s because becoming one is not as easy as “flipping the switch.” But a number of leaders have put the critical pieces in place — combining new thinking, new applications of data and advanced computation to take advantage of opportunities that emerge as a new era unfolds. These leaders understand that their innovations in technology and management are overturning old approaches in the same way that the quality movement in the 1980s and the internet in the late 1990s “changed everything.”

This transformation, a shift to embracing complexity to reveal truths and predict future possibilities and outcomes, demonstrates the significance and power of the mathematical corporation. Once you break constraints you may not even know exist, you can tap machines to predict the course of events. You can conceive of advances you didn’t think of before. And you can unleash your imagination to prescribe solutions to problems that weren’t formerly apparent.

If the past was about analytics and big data, the future is about the big mind of the mathematical corporation. Big mind comes from combining the mathematical smarts of machines with human imaginative intellect. And this triggers the next leap in organizational performance.

Big mind may help identify hacking in financial systems that was once too subtle to see. Or discover new energy sources that eliminate batteries and wires. Or find hiccups in the global supply chain.

Or identify flaws in organizational policies that spur healthcare costs. Or produce as yet unsynthesized materials that double the service life of products from tires to artificial hips. Or launch new businesses for which machine and human intelligence embedded in software — as in self-driving trucks — produces 10 times the value of the base product itself.

In The Mathematical Corporation, we describe leaders who are addressing just these types of problems. At companies like Merck and InterContinental Hotels Group and Bloomberg LP. At government agencies like the U.S. Census Bureau, Federal Aviation Administration, and the Army. At nonprofits like Polaris, the anti–human trafficking organization, and the Simon-Skjodt Center for the Prevention of Genocide. Leaders at these organizations have convinced us that developing the big mind of the mathematical corporation is inevitable — and imperative.

Because, as you see more, learn more and infer more, you have the power to act more decisively to fulfill new missions. As computers manage the complexity of newly illuminated minutiae, humans have more power to tackle the complexity of decision making — managing what has heretofore been thought of as unmanageable.

This future power will drive you to ask bigger questions. It will allow you to generate the foresight to better see the future and to devise solutions that were once impossible to conceive.

This power to search for the secrets hidden in this once unknowable universe — secrets about the workings of human systems, ecosystems, social systems, organizational systems and urban systems like those in Chicago, Paris and Beijing — gives the ability to understand the workings of those systems like never before. It brings an epochal tipping point where the whole of individual technologies, put to work with human intellect, comes to equal more than the sum of the parts.

We show how to develop thinking skills to work in partnership with machines; how to break old perspectives about what’s possible in the newest, biggest cities of data; how to muscle up an organization with new technology that takes it to a new level; how to devise strategies — once impossible strategies — to deliver superb performance, no matter the mission.

We have long had to constrain thinking about the world because we didn’t have the technology to either gather or analyze the volume, variety and velocity of data now radiating from the world’s devices. Even when there was a lot of data, the approach was to grasp complex systems through a host of simple, often simplistic, rule-of-thumb mental models. These models only crudely approximated reality. We lacked the ability to make sense of the atomic-level nits and bits of the systems we work and live within.

But that ability is now at hand. As machines ingest and process ever more detail, computer models can do what people cannot, and consistently outstrip crude, intuition-based mental performance. The ramifications of this development are bigger than many people think. You will make decisions based on deeper and broader inquiries. You will simulate and predict the future with genuine reliability.

Coggins, in fulfilling the mission to deploy assured positioning, navigation, and timing technology for the military, stressed his immersion in the creation and review of models. They underlie systems that now crunch terabytes of data that make PNT devices work — even when GPS signals are jammed, such as when soldiers enter buildings or caves. This is when the models — not a faint signal from space — provide the timing needed for weapons systems to work.

Coggins now thinks less about supplying GPS systems and more about how to manage a “system of systems” in which the GPS is only a part. The model is enormously complex. GPS receivers crunch signals from four to 12 satellites; one receiver, in one hour, can generate half a gigabyte of data. What’s more, given that satellite data may sometimes be hard to retrieve — in urban canyons, for example — Coggins needs to integrate satellite data with signals from new systems, such as nearby “pseudolite” ground stations that provide a higher-power alternative to the weak GPS signals.

Coggins’s approach reflects the new thinking all leaders need. He takes a direct hand in crafting and judging the models — mental and computer — that will give the military the ability to carry on, even when conventional GPS signals don’t work. This mission-critical job requires that he embrace, not delegate, core capabilities in the fast-moving revolution of possibilities.

As this story demonstrates, this does not give over the job of leadership to a machine — quite the opposite. Machines are still a long way from being that good. The mathematical corporation provides new and exciting ways for leaders to employ unique human qualities at a higher level. The supercharged human ingenuity wielded in the real world will stem from the thought-like operation of machines in the digital one.

Only leaders who learn to assemble the pieces and tap their potential will realize the benefits of this marriage, however. This requires personal growth and organizational change. Both are required to make the mathematical corporation succeed.

Leading in the era of the mathematical corporation means learning to treasure the detail in systems you never quite knew before. It means breaking tired thinking patterns to transform yourself and your organization. You will stand out, lighting up the hidden power grids of work and life, exploring new substance to orchestrate fresh music. You will flip the switch to realize the promise of the mathematical corporation.