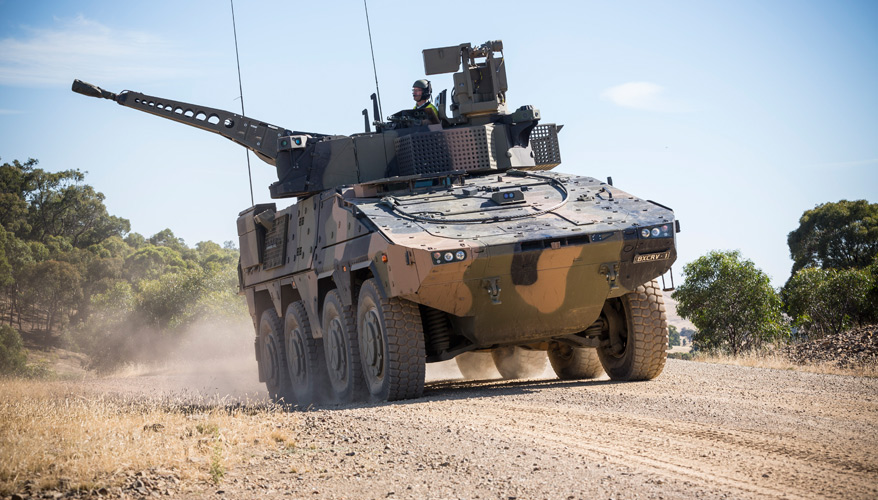 LONDON — The Australian army is investing billions of dollars toward the fielding of new technology such as combat vehicles, communication equipment and solider systems, a service official said Sept. 12.

“The Australian army has embarked on a major period of modernization which will recapitalize our force over the next decade,” said Maj. Gen. Kathryn Toohey, head of land capability for the Australian army during remarks at the Defence and Security Equipment International Conference held at the ExCel in London.

In 2016, the Australian government released a defense white paper that called for increased investment in the protection of Australia and its immediate region, she said.

It directed “the development of a capable, regionally superior defense force with the highest levels of military capability and technology sophistication,” she said. “To underpin this aspiration, the government committed to return the defense budget to 2 percent of GDP by the early 2020s, with much of this additional funding going toward the capitalization of capability across the” army, navy and air force.

“We have had the same vehicle in service with one upgrade for 52 years,” she said. Because of their age, the vehicles aren’t as capable in defending themselves against the threat of rocket-propelled grenades and improvised explosive devices, she added.

To address the problem, the Australian army is embarking on an ambitious effort to recapitalize its fleet, Toohey said.

“Over the next 20 years, [the] army has been allocated around $20 billion to upgrade or replace every armored vehicle in our inventory,” she said. “The vehicles will have active protection systems and employ a range of smart munitions. Collectively, they will be closer to the joint strike fighter in terms of sensors, networks and lines of code than the compressed aluminum boxes they will replace.”

One line of effort is called the Land 400 program, which initially aims to replace Australia’s light armored vehicles with an 8x8 wheeled combat reconnaissance vehicle, she said.

The program is in its final stages, she noted. Final tender offers were submitted last month and a decision announcement by the Australian government is expected in the first half of next year, she said.

The next phase of the effort would include the fielding of an infantry fighting vehicle, she added.

Australia is also planning to upgrade its communication systems. Despite kicking off an effort to improve its military communication network a decade ago, the Australian army is still not where it should be, she said.

“We’ve had digital radios and data in the deployed environment since I was a young officer and we have capable strategic communication systems,” she said. However, “our systems are not uniformly distributed … and we struggle to support the increased demand for bandwidth and mobility whilst balancing the associated imperative to reduce signatures and protect against cyber attack.”

The army has also purchased a number of commercial-off-the-shelf systems that may work well in isolation, but that are not able to connect with each other, she said.

“Our objective is to transition our current C3 system designed from the bottom up toward becoming a top-down, integrated-by-design digital land combat system,” she said. It would closely resemble the type of network the Australian navy and air force employ, she added.

The service plans to field a capability that “will provide the framework to digitally connect sensors and weapons on a platform and between platforms to enable the army’s combined arms teams to over time be able to fight digitally, enabling machine-to-machine interfaces to reduce the time it takes from detection, through decision, through the soldier, to engagement,” she said.

Additionally, it will better connect the army with its sister services and coalition partners, Toohey said.

The Australian army is also working on soldier technology that will reduce the load troops carry, she said.

“In the past, we’ve treated … [soldiers] like Christmas trees, where we’ve progressively just hung more and more kit off them,” she said. “We now treat the soldier as a system and make tradeoffs across the various subsystems.”

The body armor that soldiers wear today are eight kilograms lighter than those worn by troops in the early 2000s, she added.

The service is also making progress with firearms. It recently doubled the effective range of the Australian-built EF88 enhanced assault rifle, from 300 meters to 600 meters, she said.

As the army pursues new technology, Australia will look toward its own industry and others around the globe, including the United States, to fill its needs at the most affordable cost, Toohey said.

IARPA Reaching Out to Nontraditional Industry