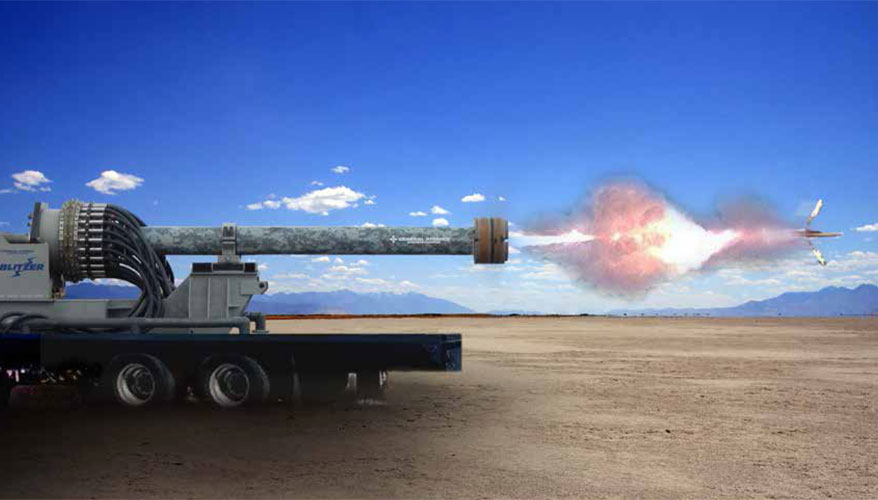 An advanced railgun cannon prototype independently developed by General Atomics is preparing for testing, according to the company.

The system was designed to provide multi-domain capability on a smaller footprint for ship, land and mobile devices. It will be delivered to Dugway Proving Ground in Utah, according to a company press release.

Scott Forney, president of General Atomics Electromagnetic Systems, previously told National Defense that the company intends to hit a stationary target by the fourth quarter of this year. By early 2018, it expects to hit a surrogate cruise missile currently in development by General Atomics, he added. Testing is expected to last about nine months.

The company's third generation railgun launcher is "a leap forward in advancing railgun technologies," said Nick Bucci, vice president for missile defense and space systems at General Atomics. It offers reduced size and weight for the launcher, twice the energy density in a reduced footprint and more capable hypersonic projectiles, he added.

Successful projectile component testing was completed in early 2017, and demonstrated a continuous two-way data link between the in-flight projectiles and the ground station over an open range, which supports the fire control solution, the release said.

In addition to the medium-range multi-mission railgun system, the company is finalizing the fourth generation of its pulsed power system, which will be delivered to the Navy. Previously, General Atomics and BAE Systems were each contracted by the service to create a prototype railgun system, designed to file projectiles at energy levels of 20 to 32 megajoules, according to a Congressional Research Service report.

The Office of Naval Research has been working for over a decade to develop the railgun, an electromagnetic weapon capable of launching projectiles at speeds exceeding that of conventional gun technology.

It could reduce explosive loads aboard ship and allow the Navy to engage more targets, and would be more cost-efficient as opposed to conventional gun or missile systems. Once fielded, it could be used for naval surface fire support or anti-surface warfare.