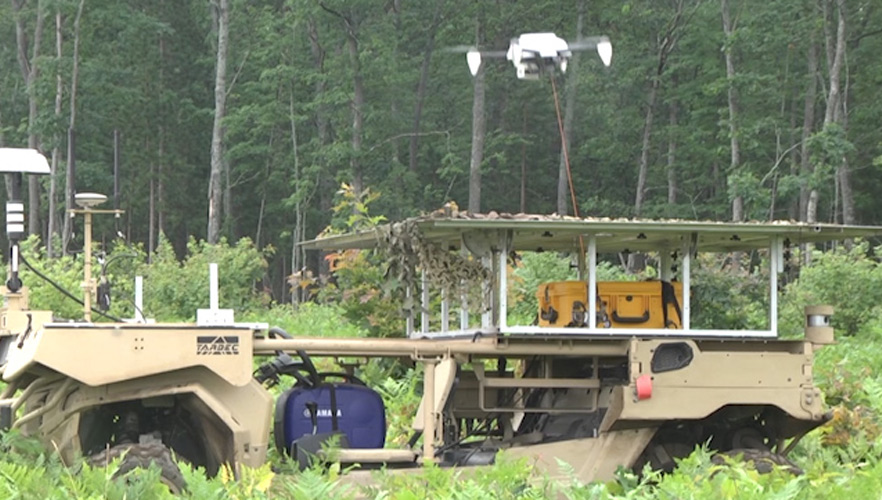 A tethered unmanned aerial vehicle takes off from a remotely-operated MRZR vehicle during Exercise Northern Strike 2017.

The Army took another step toward its goal of fielding armed robotic ground vehicles that will fight alongside manned platforms when it tested its "wingman" concept at a major exercise this summer.

The Army's Tank Automotive Research, Development and Engineering Center, or TARDEC, demonstrated the so-called "wingman" capability, which teams manned and unmanned platforms to provide added lethality and intelligence, surveillance and reconnaissance in the field.

The goal of manned-unmanned teaming is to deliver lethal force while soldiers maintain a safe distance from an adversary and to "extend the reach of the warfighter," said Maj. John Dickson, assistant product manager for the emerging capabilities office at TARDEC.

"You can engage the enemy from positions of relative advantage while keeping yourself behind cover," he said. "The robots can go out and engage the enemy and deliver those effects … as opposed to having to put a human right there in harm's way."

But while the robot is delivering the effects, "it is a human that is pushing the button that pulls the trigger," he noted.

The exercise, Northern Strike, took place from July 29 to Aug. 12 at Camp Grayling Joint Maneuver Training Center in Michigan. The annual exercise hosted by the Michigan National Guard brings about 5,000 service members from 13 states and five coalition countries together to demonstrate proficiency in a variety of missions in a joint and multinational environment, according to the Michigan National Guard.

TARDEC is in the first year of a three-year program to develop wingman capabilities, Dickson said. The center is currently using Humvee platforms as low-cost demonstrators "so we can invest the money in the technology and not necessarily the platform," he added.

However, the technology will eventually be scalable, to include the Stryker vehicle, Bradley and Abrams, he said. If the Army continues with plans to develop a family of next-generation combat vehicles by the 2030s, the wingman capability would work with that platform as well, he added.

As manned-unmanned technology has matured, Northern Strike seemed like "a phenomenal opportunity" to allow a diverse set of soldiers to explore the wingman concept, Dickson said.

In the exercise, TARDEC demonstrated how a manned M577 command post vehicle would provide command and control for a remotely operated M113 armored personnel carrier armed with an M240 Bravo machine gun, along with an unmanned aerial system tethered to a remotely operated MRZR tactical vehicle, according to the center.

During one part of the demonstration, the wingman capability was integrated with a host of companies performing squad tactical exercises. The robots provided maneuver support, Dickson said.

"They were moving through the woods, and then they had wingman support covering one of their flanks; they had [joint terminal attack controllers] embedded with them providing aviation support," he said. "And so we're just augmenting their firepower."

The second portion of the demonstration involved a live-fire exercise, Dickson said.

"Once [the soldiers] were moved into position … we displaced and moved to a secondary position to provide a screen," he said. The wingman operator then utilized the robots' ISR and lethality capabilities to protect the soldiers as they executed a breach, he added.

The exercise provided a key learning opportunity for the soldiers, as "any time you have enablers added to your formation, it adds a layer of difficulty," Dickson said.

Each unit used the robots differently, he noted. Depending on how the soldiers integrated the systems affected their maneuvers. Those who dug in and embraced the technology ended up accomplishing more, because it freed up manpower to have unmanned platforms assigned to defend sectors that would otherwise need manned assets.

"And then there were other units who sidelined their robots," Dickson said. "They found the robots to be kind of cumbersome because they hadn't integrated it into their formation, and so [they] became a distraction."

Shortly after Northern Strike, TARDEC brought the wingman capability down to Fort Benning, Georgia, to execute another set of demonstrations — this time without integrated soldiers.

That was so TARDEC could "baseline that technology against [assets] that the Army has," he said. The wingman was assessed to the same standards as existing capabilities, to identify its current strengths and weaknesses against human-operated weapon systems, he added.

The information gathered from Northern Strike and other exercises will inform TARDEC's next technology build for the wingman, Dickson said. The center is considering autonomous features for low-level tactical behaviors, perhaps something like the park assist function on a car, he added.

"We're looking at some of these tactical behaviors … for the robot that you can just plan into it," he said.

TARDEC is also looking to develop a purpose-built machine gun developed specifically for the wingman capability, he added. "Right now, we are taking weapon systems that are designed completely for manned systems and putting them on robots. … It creates some inherent hardware issues," he noted.