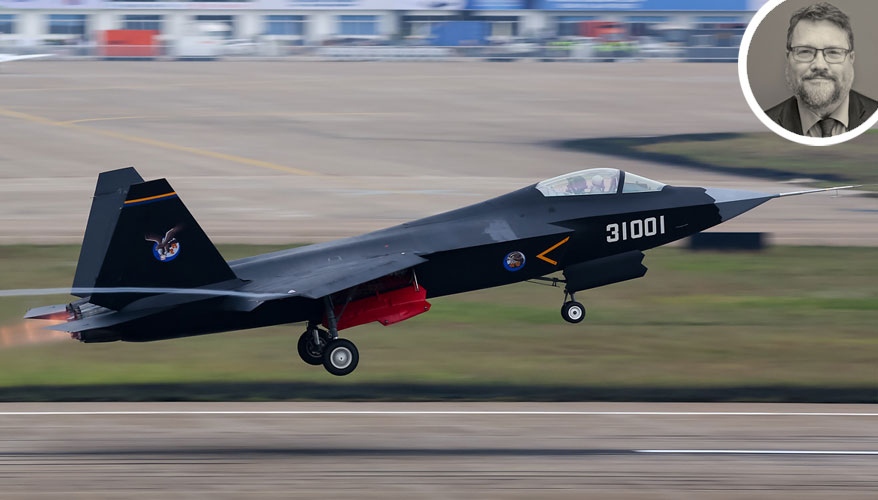 By 2022, about one-fourth of U.S. Air Force combat aircraft will feature stealth technology.

And as older platforms retire, and newer ones such as the F-35 joint strike fighter and the B-21 bomber replace them, that percentage will only grow.

That fact has not been lost on potential rivals, who have watched the Air Force use the game-changing technology with great effect since its success over the skies of Baghdad during the first Gulf War in 1991.

The suite of technologies that comprise what is collectively known as “stealth” in modern combat aircraft is still part of the immediate future and gives U.S. forces a big advantage. It will be featured in the upcoming B-21 and was part of the Navy’s X-47B unmanned system.

But what about the long term? Will there be an equally game-changing defensive technology that renders this advantage obsolete?

That’s one of the questions retired Air Force officers Maj. Gen. Mark Barrett and Col. Mace Carpenter sought to answer in a report, “Survivability in the Digital Age: The Imperative for Stealth,” produced by the Mitchell Institute for Aerospace Studies.

“Over the long run, the U.S. will engage opponents who field increasing numbers of powerful digital multi-band radars,” the authors wrote. And that is particularly troubling when ground-based systems alert surface-to-air missile (SAM) batteries about approaching aircraft.

“Russia and China are now developing and fielding air defenses that take sensing information sharing to the next level in an attempt to counter U.S. stealth capabilities,” the report said. Their SAMs are also improving. They are faster and more maneuverable and their launch systems more mobile, with “shoot-and-scoot” capabilities.

The authors highlighted several other methods adversaries can pursue that could help them detect stealthy aircraft.

The first is infrared detection. One of several innovations that goes into a stealth aircraft’s secret sauce is the placement of the engine and the exhaust system, which reduces its heat signature. The emergence of next-generation long-wave infrared search-and-track sensors worries some analysts.

Along with heat, there is sound. Acoustic detection is another threat. Jet engines are loud, and the careful placement of sensitive microphones could detect stealthy aircraft.

Wake detection, or the search for disturbances in the atmosphere, is another means adversaries could use to defeat stealth.

None of these are necessarily game-ending technologies for stealth, the authors pointed out. The laws of physics limit the effective ranges of long-wave infrared search sensors and they have trouble operating in adverse weather conditions.

Acoustic sensors would require placing thousands and thousands of microphones over large areas, and such a system would have a hard time discriminating between the stealth aircraft and others. And wake detection sensors don’t work well at night.

“Adversaries kept trying to negate the value of stealth. But as they develop more lethal defensive systems, we continue to refine and improve our own stealth capabilities,” Carpenter said at a briefing about the report on Capitol Hill.

That in turn imposes costs on rivals by forcing them to invest more on defense and less into offensive systems, he added.

In an anti-access/area denial scenario, adversaries have three basic technologies at their disposal to defend against aircraft: radars, jet fighters and surface-to-air missiles.

Improvements are always being made to the latter two. The Russian SA-21 SAM, for example, has a greater range than its predecessor. China’s J-31 jet fighter has a shape similar to the stealthy F-22s and F-35s, the authors noted.

“Without improvements in radar, however, new SAMs and fighters would be operating in the blind against stealth aircraft,” they wrote.

The goal for designers and engineers is to make a stealth aircraft appear as small as possible to radar systems, to the point where it would appear to be an object the size of a marble. By the time it shows up as a blip on a radar, it’s too late, the aircraft has reached its target.

Another vulnerability is the need to refuel.

Carpenter said: “You got to have tankers to get you in and get you out. The closer a tanker can get you to the fight, the better it is for the strike packages.”

How to refuel and remain stealthy is a problem, he acknowledged.

“Anything that reduces the signature on the tanker would be beneficial,” he added.

Special coating is one way to evade radar, but the design is critical. This is why the F-117 Nighthawk and B-2 Spirit were “flying wings.” This lower profile design requires that nothing is hanging off the aircraft.

Carpenter said he is skeptical of new supposedly stealthy aircraft being developed by China and Russia. They “have gone to school on us,” he said, yet “all the airplane pictures I have seen still has stuff hanging off the wings … and that just kills your stealth.”

While there is a lot to be concerned about, overall neither the report nor the Capitol Hill briefing struck an alarmist tone.

Like almost all electronic technologies, the sensor field is benefiting from Moore’s Law increases in computing power and miniaturization.

But the same advances apply to U.S. efforts to improve its stealth capabilities.

Improvements are being made to coatings, designs, heat signatures and so on. And there is a lot more to survivability in an anti-access fight than not being seen, the authors pointed out. There is speed, maneuverability, spoofing and jamming. Plus, there is the four decades of experience employing the technology.

Correction: A previous version of this story mischaracterized the design of the F-117.

Re: TECHNOLOGY TOMORROW: Adversaries Creep Up on Stealth Aircraft (Updated)