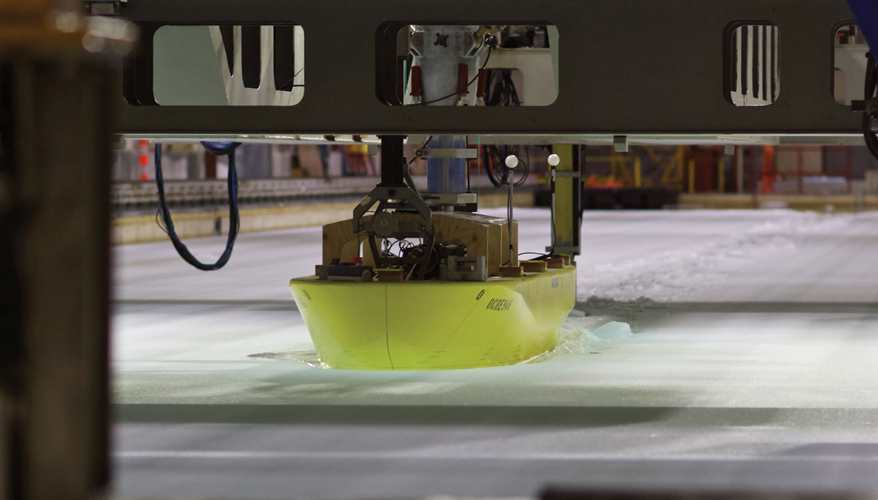 With the United States facing the imminent retirement of its sole operational heavy-duty polar icebreaker, the U.S. Coast Guard is teaming with Canadian researchers to help conduct tests that will inform requirements for a new vessel.

The service is responsible for maintaining the nation’s fleet of polar icebreakers, but currently only has two operational ships in its inventory — the Polar Star, a heavy-duty vessel, and the Healy, a medium-duty icebreaker. With the Polar Star approaching the end of its service life in the next several years, the Coast Guard is working in earnest to field a new vessel.

This summer the service and the National Research Council of Canada teamed up to conduct ice testing for a potential new vessel. The experiments occurred at the NRC’s St. Johns, Newfoundland, facility, which has a large tank that can simulate sea ice.

“The way we build that ice sheet … is not just the way you would freeze ice cubes,” said Jim Millan, director of research at the facility. “We go through special processes to develop that ice so that it actually has the correct properties for us to test it. So it mimics basically sea ice at a model scale.”

During the tests — which started in May and continued through August — the NRC conducted experiments with a heavy-duty polar icebreaker model that was 1/30 the scale of a normal vessel, he said. The model traversed the ice tank and simulated ice thicknesses up to eight feet.

Most of the testing focused on the powering and maneuvering of the vessel while breaking through ice, he said.

Naturally occurring sea ice is not flat, Millan said. “In nature it gets pressurized, and when two sheets of ice come together it’s almost like continental drift — you get pieces of ice flowing together with great force and you get these pressurized ridges that form and the ice gets pushed underwater and above the water into almost … a great big wall,” he said. Icebreakers can sometimes go around these obstacles, but occasionally have to batter through them, he added.

The ice tank is able to recreate some of these ridges, he said.

The St. John’s facility has been in operation since 1984. The NRC has in the past worked with the U.S. Coast Guard on research work for vessels such as the Healy, Millan said.

Canada’s coast guard is also working to procure new icebreakers. That makes the partnership between the two countries mutually beneficial, he said.

“It just makes sense for us to share in the development,” he said. “We are learning a lot from working with the U.S. Coast Guard. … Every ship model that we test is unique.”

The partnership will allow for commonality among the vessels, he added.