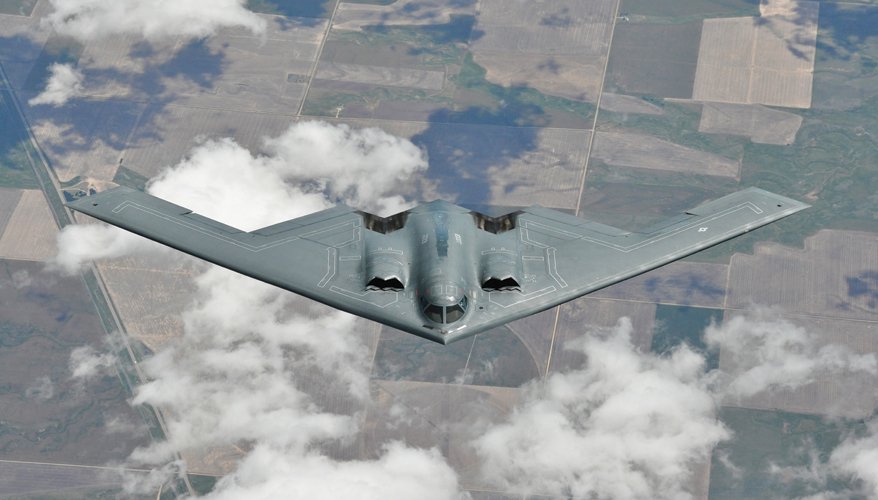 The Air Force has ambitious plans for modernizing the air leg of the nation’s nuclear arsenal. But questions remain as to whether enough funding will be available for the service to meet its goals.

“Today only 12 percent of our bomber fleet is survivable in that environment,” Gen. Stephen Wilson, vice chief of staff of the Air Force, said during remarks at an Air Force Association event in Washington, D.C.

That’s why the service is pursuing a next-generation stealth bomber. The aircraft, known as the B-21 Raider, is expected to give the Pentagon a new long-range strike system that can carry nuclear or conventional weapons deep into well-defended enemy airspace and not get shot down.

“In the kind of environment we’re going to ask our airmen to operate in, we’re going to have to have that kind of platform,” Air Force Gen. Paul Selva, vice chairman of the Joint Chiefs of Staff, said at a strategic deterrence conference in Arlington, Virginia.

The B-21 is being designed to have an open architecture, which would facilitate upgrades as threats evolve.

“Open architecture allows new sensors or other subsystems from various vendors to be easily integrated into the aircraft,” said Jeremiah Gertler, a military aviation specialist with the Congressional Research Service.

“As a result, the initial B-21 aircraft can be augmented more easily as advanced technologies are developed,” he said in a recent report titled, “Air Force B-21 Long-Range Strike Bomber.”

The plane will initially be a manned aircraft, but unmanned operations could be possible several years after it enters the fleet, he added.

In October 2015, the Defense Department selected Northrop Grumman as the bomber’s prime contractor. The estimated average procurement cost is $564 million per plane. Air Force officials want to procure at least 100 B-21s, although some anticipate more.

“We continue to work the exact numbers. But I can tell you that as the world environment changes … I think the demand for long-range strike only goes up from that 100 number,” Wilson said.

The B-21 is among the Air Force’s top three acquisition priorities. The president’s fiscal year 2018 budget request includes $2 billion for further development of the aircraft.

Few technical details about the plane have been revealed. The Air Force released concept art depicting a flying wing design similar to the B-2. However, the expected size, speed, range, required stealth, structure, engines and onboard sensors remain classified, Gertler noted.

The service aims to move relatively quickly on development and production.

“Instead of the regular acquisition process, B-21 is being managed and acquired through the Air Force Rapid Capabilities Office, with reduced overhead and a much smaller program office than typical for such a significant program,” Gertler said.

“When the authorities are given to a small core of people in the Rapid Capabilities Office … they go fast and deliver,” he said at an Air Force Association breakfast in Washington, D.C.

Pentagon officials have said relatively mature technologies would be used during the B-21’s development phase, and they expect the aircraft to achieve initial operating capability in the mid-2020s.

“This high level of technical readiness may help explain why the Air Force anticipates IOC approximately 10 years from contract award, whereas other technically complex aircraft like F-22 and F-35 have taken more than 20 years,” Gertler said.

Wilson told National Defense that the program is “on track.”

“We had a good preliminary design review and we’re making sure we’ve got all the right people in place to get on with the program,” he said.

However, Selva said steady funding will be required to ensure that the aircraft is delivered on time. “There is a point in the not too distant future where any delay to the actual acquisition timeline for the airplane will become an obstacle to success, and we have to be really careful about the budget.”

The specter of what happened with the B-2 Spirit program in the 1990s looms over the Air Force’s pursuit of a next-generation stealth bomber. Initial plans called for procuring 132 B-2s but production was cut off after the Cold War ended, and only 21 were purchased. The aircraft ultimately had a staggering average cost of $2 billion per plane.

“If the B-21 goes down the path of the B-2 and it has a slowly decreasing number of aircraft required — say if it goes from 100 to 50 to 21 — then … the per-unit costs would go up,” said Mark Gunzinger, senior fellow at the Center for Strategic and Budgetary Assessments.

Lower production numbers undermine economies of scale. Additionally, “the cost to develop and test the aircraft is going to be fixed, and if you divide that by a smaller number [of planes purchased] then the overall unit cost increases,” he explained.

Wilson said the Air Force is being mindful of the B-2’s pitfalls as it develops the B-21. “One of the ways we’re doing that is we’re making sure we’ve got stable requirements.” They have not changed significantly since the requirements document was written several years ago, he noted.

In written testimony to the House Armed Services strategic forces subcommittee, the commander of Air Force Global Strike Command recently warned about the consequences of shrinking the planned buy.

“Lessons learned from the difficulty sustaining and modernizing the B-2’s small fleet should be considered when determining the purchase size of future acquisitions such as the B-21,” said Gen. Robin Rand.

Gunzinger said it’s unlikely that the Raider would suffer the same fate as the Spirit because the strategic environment has changed greatly since the B-2 production line was shut down. Potential adversaries continue to develop more sophisticated anti-access weapons, he noted.

“That operational environment is going to get even more challenging,” Gunzinger said. “So I could see that number … [of B-21s procured] increasing from 100 rather than decreasing. And that would have the effect of reducing the per-unit cost.”

As the Air Force waits for the Raider to come online, the service is taking steps to keep legacy stealth bombers survivable through the 2020s.

“We are starting the most aggressive modernization period in the history of the B-2,” Rand said.

To ensure the aircraft’s ability to penetrate enemy defenses, the Air Force has tapped manufacturer Northrop Grumman to modernize its electronic warfare capability, known as the defensive management system. 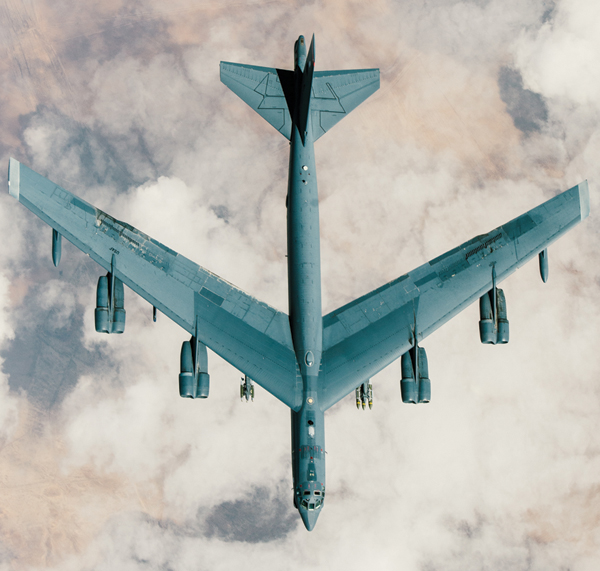 
Nuclear command-and-control needs will be met by adding very low frequency and extremely high frequency satellite communications to the plane, he said.

Keeping the B-2 flying is not without difficulty, Rand noted. “Small fleet dynamics continue to challenge our sustainment efforts primarily due to vanishing vendors and diminishing sources of supply,” he said. “We are striving to maintain the proper balance of fleet modernization and sustainment while maintaining combat readiness.”

Another legacy bomber slated for major upgrades is the B-52 Stratofortress, which was built by Boeing. The aircraft has been a workhorse for decades. Some in today’s fleet were produced in the 1960s. Nevertheless, the Air Force hopes to extend the plane’s service life well into the 21st century.

“The B-52 is able to deliver the widest variety of nuclear and conventional weapons,” Rand said. “It is paramount that we continue to invest resources into this aircraft now to keep it viable in both conventional and nuclear mission areas for the next 30 to 40 years.”

The bomber’s last major radar upgrade occurred in the early 1980s. The average time between radar failures is only 46 flight hours, he noted.

“The current radar on the B-52 will be even less effective in the future threat environment,” Rand said. The Air Force plans to spend $500 million over the next five years to modernize the system.

The bombers will also receive Boeing’s combat network communications technology, known as CONECT. Additionally, the Air Force will add the Link-16 communications node. “The ability to launch bombers and retask/retarget them … is a powerful force multiplier,” Rand said.

An internal weapons bay upgrade will increase the B-52’s “smart weapons” capacity by 67 percent. Joint Air-to-Surface Standoff Missile and JASSM-Extended Range capabilities will be added in late summer, he said.

The service is also exploring options to replace the B-52’s engines to make them more fuel efficient, and less burdensome to maintain.

“If we’re going to have this airplane fly into the 2050s, we have to do something about those engines,” Wilson said. “The question now is money. If I had the money I would do it, but I don’t have it.”

The Air Force also aims to modernize the nuclear cruise missiles that its bombers carry. The legacy AGM-86B air-launched cruise missile in the fleet today was first fielded in the 1980s.

“The ALCM is over 30 years old, well beyond its life expectancy and is involved in its third life extension program,” Rand said. “We must replace it due to its aging subsystems, the shrinking stockpile of operational missiles and advances in enemy defenses.”

“It’s a miracle that it can even fly,” he said. “The reliability on those weapon systems is already unacceptable and it’s going to get worse every year as we go forward.”

The service plans to spend $2.6 billion over the next five years on a replacement, known as the long-range standoff weapon, or LRSO. Analysts have estimated that the program could ultimately cost $20 billion or more.

The new system is expected to be compatible with B-52s and B-21s and remain in service through 2060. The Air Force intends to acquire approximately 1,000. A request for proposals was issued last year, and initial operating capability is expected in 2030.

Cruise missiles offer advantages over gravity bombs, Air Force officials noted. They don’t require bombers to fly over hostile territory and put pilots and expensive aircraft at risk. Additionally, a salvo could strike multiple targets and would be more difficult for an enemy to thwart.

“Each bomber carrying 20 of those makes it a very daunting challenge for any adversary,” Wilson said.

Critics of the weapon — including a number of Democratic lawmakers — have argued it would be too costly and destabilizing. Some worry that adversaries could confuse incoming conventional cruise missiles for LRSOs and mistakenly conclude that they were under nuclear attack.

Wilson disagreed. “We’ve had [nuclear cruise missiles] for a long time and they haven’t been destabilizing,” he said. “The cost of the LRSO in the big scheme of things is a very small part of the overall strategic deterrent budget,” he added.

Having a modern long-range cruise missile is critical for arming non-stealthy bombers like the B-52, he said.

Hyten told reporters that congressional concerns would need to be addressed as LRSO advocates try to keep the project on track.

Although Air Force leaders regularly tout the importance of the bomber fleet, it might have to compete for funding with other high priority acquisition programs. The Defense Department estimated that current nuclear modernization plans — which include a new ground-based intercontinental ballistic missile system, a new class of ballistic missile submarines and other technologies — would cost $350 billion to $450 billion. Other analysts have projected even higher costs.

“If you … put all the modernization programs on the table, it adds up to a whole lot of money,” Hyten said.

Meanwhile, upgrades to conventional weapon systems and platforms slated for the 2020s are expected to come with a hefty price tag. Defense budget experts have warned of an impending modernization “bow wave” that could force difficult tradeoffs.

Spending on nuclear programs is projected to eat up “a significant portion” of annual budgets in the out years, peaking at around 6 percent, Wilson said. “It’s certainly something we can afford as a nation. We just have to prioritize it.”