Cost of Ford-Class Carriers in Question 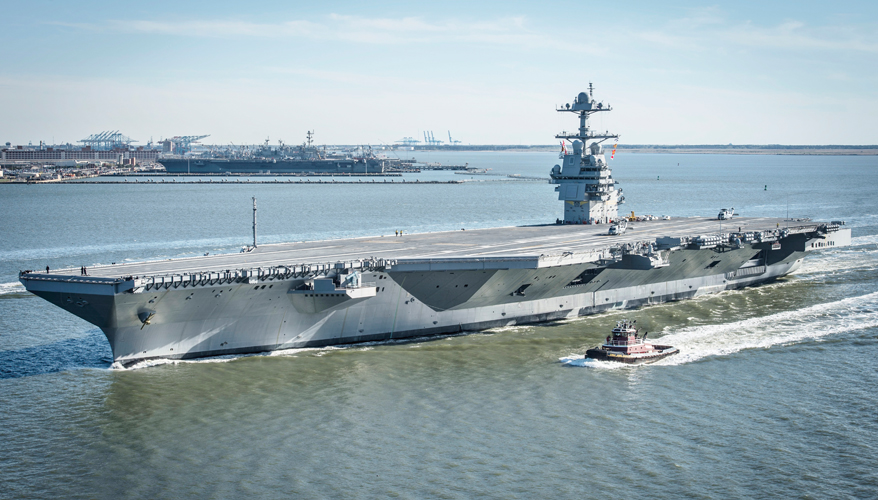 The Navy’s Ford-class aircraft carrier program is under renewed scrutiny after a government watchdog group said the second ship might bust its cost cap.

“Cost growth for the lead ship was driven by challenges with technology development, design and construction, compounded by an optimistic budget estimate,” the report said.

The Navy estimated that the second ship in the class, the USS John F. Kennedy, CVN 79, would not cost more than $11.4 billion — the cap set by lawmakers. But the GAO raised doubts about whether that target could be met.

The Navy’s projection “is not reliable and … does not demonstrate that the program can meet its $11.4 billion cost cap,” the report said. “The Navy developed an estimate for CVN 79 that assumes a reduction in labor hours needed to construct the ship that is unprecedented in the past 50 years of aircraft carrier construction.

“Analysis shows that the … cost estimate may not sufficiently account for program risks, with the current budget likely insufficient to complete ship construction,” it added.

The GAO recommended the Pentagon obtain an independent cost estimate, and ask Congress to revise the cost cap if the independent analysis indicates that the Kennedy can’t stay within the current one.

In its official response to the GAO report, the Defense Department said its cost assessment and program evaluation office would conduct an independent review and provide an updated estimate for the Kennedy. However, it pushed back against the idea that the ship was destined for a cost overrun.

Experts said the Kennedy is not in danger of creating a Nunn-McCurdy breach that could jeopardize the program. Nevertheless, a cost overrun could still be problematic, noted Bryan Clark, a naval analyst at the Center for Strategic and Budgetary Assessments.

“The Navy would have to go back to Congress and get … relief on the cost caps so they could appropriate additional money for the program,” he said. “Congress could slow down the program by saying, ‘You need to get us a better plan for controlling costs on the Kennedy before we come back and give you relief.’”

Looking ahead, the Senate Armed Services Committee’s version of the 2018 National Defense Authorization Act would impose a $12 billion cost cap on all future Ford-class carriers starting with CVN 80, the USS Enterprise.

The Navy plans to procure the Enterprise in fiscal year 2018. The president’s budget requests $1.9 billion to kick off a multi-year buy.
Analysts said they expect the cost of the carriers to come down and the risk of cost cap breaches to diminish as manufacturer Huntington Ingalls Industries continues to implement efficiencies.
Tom Callender, a senior research fellow for naval warfare at the Heritage Foundation, noted that the Ford was the lead ship in a new class of vessels featuring multiple revolutionary technologies.

“History has shown … that you’re going to see cost overruns and delays” under those circumstances, he said. “I think you will see the learning curve come down now with [CVN] 79 and 80 and so forth.”

Clark said: “I would think they would be able to get the cost down pretty significantly by CVN 80 and 81. The cost caps are a good measure to continue to pressure those improvements, and it would seem reasonable to expect that HII and the Navy can get the cost down to the $12 billion point.”