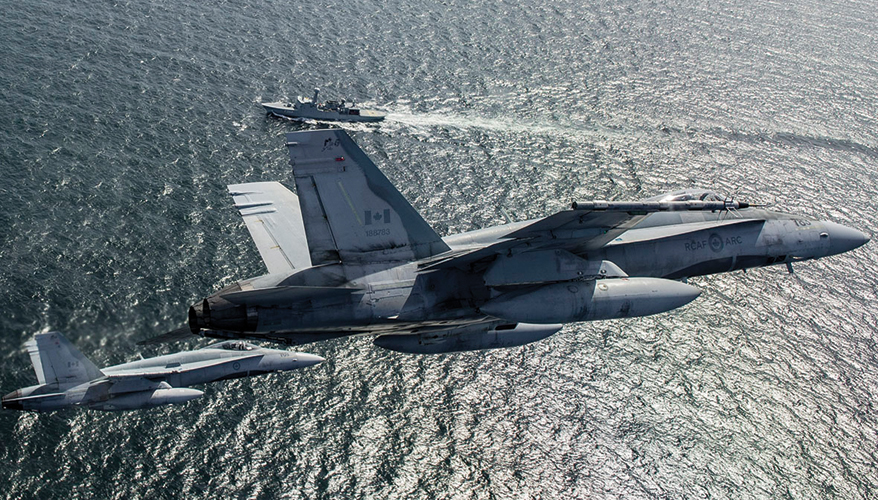 Over the next decade, the Canadian government intends to increase its defense spending by 70 percent, its defense minister announced recently.

“Years of under-investment have left our military in a financial hole,” said Harjit Sajjan during a speech in June.

“For the first time, National Defence and the Canadian Armed Forces will have a 20-year funding commitment,” he said. “This transparency will enable long-term planning and effective management of public funds, more than ever before.”

Canada will recapitalize its air force with a fleet of 88 advanced fighter jets, he said. The policy also funds the building of 15 surface combatant ships, new equipment for its ground forces and the acquisition of remotely piloted aircraft.

NATO alliance members have a stated goal to spend 2 percent of their GDP on defense by 2024, but few countries currently meet it. That has been a sticking point for President Donald Trump, who has consistently pushed for allies to invest more.

“With this increase they’re not going to even be close to the 2 percent mark,” McDougall said. “If Canada was going to meet its 2 percent NATO requirement, they would have to basically increase their budget to around $40 billion Canadian dollars, and they’re talking about $32 billion dollars almost a decade from now.”

While rhetoric and pressure from the Trump administration likely contributed to Ottawa’s bump in defense spending, it is mostly due to the realization by government officials that its modernization plan would require more money than was being budgeted, McDougall said.

“Almost all of those programs are existing requirements or are existing planned programs,” he said. “This new funding is being geared toward paying for modernization that has already been planned because they’ve been underfunding a lot of their programs.”

One major change, however, is the number of jet fighters the country plans to purchase. Previously, Canada had said it would require 65 platforms, but bumped that to 88 in the new policy, he said.

The procurement of a new fighter has been a point of contention for the country. When Prime Minister Justin Trudeau’s Liberal party came into power, it shucked plans to purchase the Lockheed Martin-built F-35 joint strike fighter to replace its aging fleet of CF-18s.

Ottawa planned to have companies compete for the fighter jet contract, and in the interim purchase 18 Boeing F/A-18 Super Hornets to fill any capability gaps. However, a trade disagreement between Boeing and Bombardier, a Canadian aerospace company, has complicated the effort.

“Boeing issued a trade dispute against Bombardier over government subsidies and … the Canadian government has kind of taken that as a personal insult,” McDougall said. “So the F-35 acquisition had become politicized and now the Super Hornet has become quite politicized.”

Canada will need to make a decision soon about how it will replace its fighter fleet, he noted. “They really can’t afford to wait for too long.”

The only way Canada will increase defence spending is if $20B in sovereignty abdication tariffs are imposed and the money is allocated on its behalf. Another article on this site talks of 4 heavy US icebreakers, build twice as many and a similar number of diesel or aluminum fuel cell submarines and base them at the never to be used deepwater arctic naval facility at Nanisivik for a $1 a year indefinite lease. Utilize the unused capacity in the F-35 production line and renew its air combat squadrons and have them permanently "visit" Cold Lake and Bagotville, and so on.
The only active effort the patouffe is enacting is to demoralize the forces with a series of politically correct social engineering exercises, the ultimate purpose of which is to further erode what little combat power remains. He loves Castro and Mao and islamic terrorists, not Canadians, and he wants to ensure these forces face no resistance from countries like Canada. All the spending he pledged is scheduled for ten years from now when he is long gone, so he in fact he pledged to do nothing himself while in power. This is his go to move, the classic Trudeau lie, lie, and lie again, a $20B abdication tariff imposed by the US and NATO will have little effect on Canada's $2T economy and ensure it contributes to increasing the quality of life everywhere.

So much to say....Canada can not be trusted to carry through with a comprehensive "ramp up" to increased defense spending. There is no doubt that Canada will find some other "effort" to divert spending from defense, it's just the way Canadians are. To be kind, a Leopard can't be expected to change its spots and Canadians can't be expected to increase defense spending, especially when they have the US as a neighbor who has to protect Canada regardless of what Canada does in regards to defense spending. No one doubts the resolve and courage of Canada's armed forces, they have demonstrated their superior qualities in every fight they have ever been in, Canadian governments can not make the same claim.