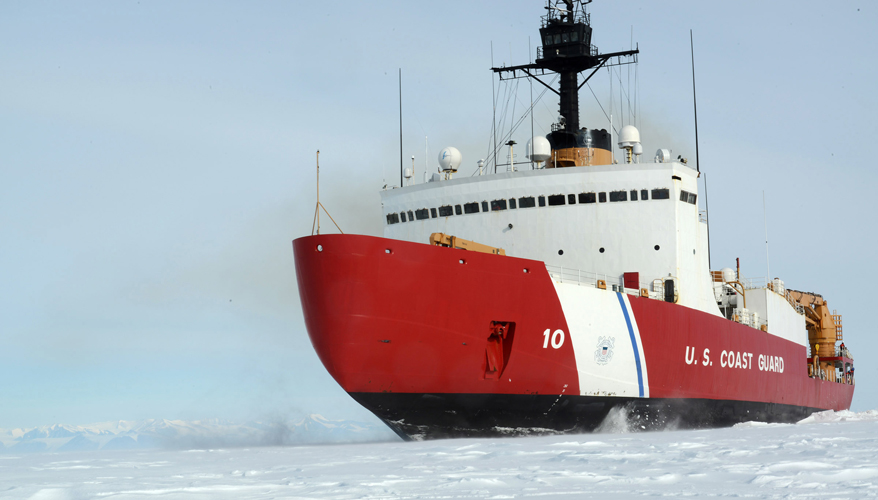 In order to balance mission need and affordability, the United States should build four heavy-duty icebreakers, a new report said. Such a block buy could save the nation up to $800 million, the study found.

“The United States has insufficient assets to protect its interests, implement U.S. policy, execute its laws and meet its obligations in the Arctic and Antarctic because it lacks adequate icebreaking capability,” the National Academies of Sciences, Engineering and Medicine said in a report titled, "Acquisition and Operation of Polar Icebreakers: Fulfilling the Nation’s Needs.” The results of the congressionally mandated study were released July 11.

The Coast Guard has a statutory requirement to maintain and operate the U.S. icebreaker fleet. Despite increasing activity in the Arctic region, the sea service only has two operational vessels — the Polar Star, a heavy-duty icebreaker, and the Healy, a medium-duty vessel used primarily for scientific research. The Polar Sea is mothballed.

The service has for many years stressed that there is an urgent need for the country to invest more in the aging fleet, particularly as nations around the globe such as Russia beef up their own, the report noted.

“The nation is ill-equipped to protect its interests and maintain leadership in these regions and has fallen behind other Arctic nations, which have mobilized to expand their access to ice-covered regions,” it said. “The United States now has the opportunity to move forward and acquire the capability to fulfill these needs.”

Previous studies have found that it could cost $1 billion or more to procure a heavy-duty icebreaker. But with the right contract, the United States could purchase four such vessels at an average cost of $791 million each, the report said. The lead vessel is estimated to cost $983 million.

The report — which was compiled by a committee made up of experts in ship construction, polar science, polar ship operations, icebreakers and maritime finance — called for a single class of icebreakers. Three of the ships could provide a continuous presence in the Arctic region, and a fourth could service Antarctica.

It is critical that the United States has a vessel in its inventory that can plow through ice in the Antarctic region so it can reach McMurdo Station annually for resupply missions, the report said.

“One heavy icebreaker servicing the Antarctic provides for the McMurdo breakout and international treaty verification,” it said. Additionally, homeporting the vessel in the Southern Hemisphere could extend its availability, it noted.

In the past, it has been suggested that the Coast Guard could potentially charter a vessel to increase capacity, but the committee found that wasn't a viable option.

“The availability of polar icebreakers on the open market is extremely limited,” the report said. “U.S. experience with chartering a polar icebreaker for the McMurdo resupply mission has been problematic on two prior charter attempts. Chartering is workable only if the need is short term and mission specific.”

Building four common heavy-duty icebreakers would reduce operating and maintenance costs over the service life of the vessels, the study found. It would also “likely improve continuity of service, build icebreaking competency, improve operational effectiveness and be more cost-efficient.”

The U.S. government should pursue a block buy acquisition strategy with a fixed-price, incentive-fee contract, the report said. “It would enable continuous production, give the program the maximum benefit from the learning curve, and thus reduce labor hours on subsequent vessels."

The acquisition strategy should incorporate a design that favors the use of commercial off-the-shelf technology. It should also retain the option of purchasing international products to “allow the sourcing of the most suitable and reliable machinery available on the market,” the report said.

The Coast Guard should plan to keep the Polar Star operational and perhaps implement an enhanced maintenance program until two new icebreakers are commissioned, it added.

“The EMP would require improvements in the ship’s operating systems, sanitary system, evaporators, main propulsion systems and controllable pitch propellers,” the report said. “The EMP could be accomplished within [the Coast Guard's] average annual repair expenditures for the Polar Star, which currently range between $2 million and $9 million.”

I thought global warming was melting all the ice???

James Drouin at 11:56 AM
Re: Report: U.S. Should Build Four Heavy-Duty Icebreakers

That would make sense. I can see two or three armed icebreakers for the Arctic waters (just as the newest Russian icebreakers will be armed) and one for the Antarctic.

The armament fit should definitely be different and stronger than what the NSCs and OPCs have. I recommend at least SeaRAM, VLS with Anti-Ship Missiles, and maybe even ESSM. The trick would be balancing the design need for armament with science.

For too long the US has neglected building new icebreakers because the interest and funding just wasn’t there. Now with the Russian build-up of bases in the Arctic, followed by China’s presence and construction of new icebreakers and an Antarctic base, I believe in the interest of US National Security, the US should really put forth an effort to have a stable icebreaker presence in the Arctic. Of course the goal is to avoid armed conflict; nonetheless, with the NSCs and upcoming OPCs, the USCG’s Arctic presence could blossom with the arrival of the new NSCs and OPCs.