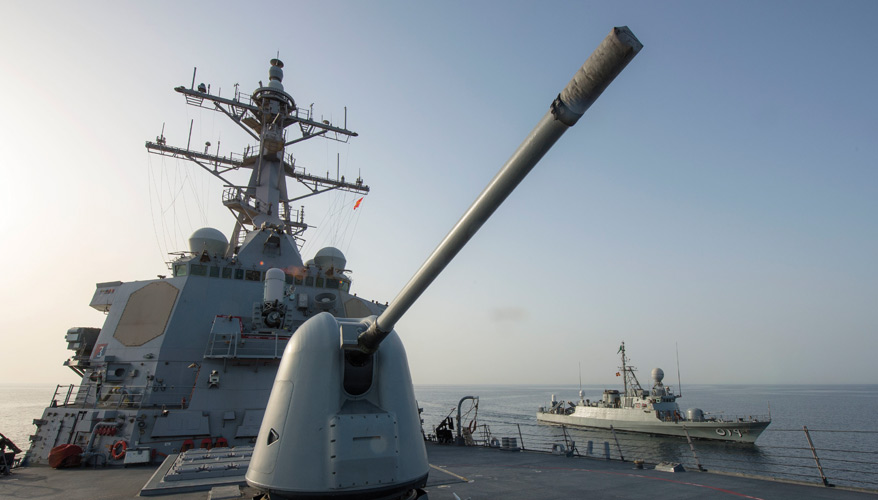 An effort by President Donald Trump’s administration to sell hundreds of billions of dollars in military weapons and training equipment to Saudi Arabia could meet resistance in Congress due to geopolitical tensions, according to one analyst.

But should the arms deals go through, several U.S. defense contractors could see a windfall, said Owen Daniels, assistant director of Middle East peace and security at the Atlantic Council’s Brent Scowcroft Center on International Security in Washington, D.C.

On his first presidential trip abroad to the Middle East and Europe, Trump announced his intent to finalize a series of proposed arms deals that would be worth $350 billion over 10 years, and $110 billion up front.

Additionally, the United States is seeking to sell new and used Bradley fighting vehicles, made by BAE Systems, and General Dynamics’ Abrams tanks to the Saudis, Daniels said.

Over $23 billion worth of systems were previously approved by the Obama administration, mostly Chinook helicopters and associated training packages, he said. But the approval of parts of the remaining package — which is worth over $86 billion — remains uncertain.

The THAAD portion of the deal could see resistance due to the United States’ commitment to maintain Israel’s qualitative military edge in the region. Traditionally, Saudi Arabia has come under closer scrutiny than some of its neighboring Gulf states because of its size and proximity to Israel, as well as its religious rhetoric, Daniels said.

The Senate recently voted to approve a controversial sale of over $500 million in precision-guided munitions, which were previously left out of the Obama-era deal in reaction to the way the weapons have been employed by Saudi Arabia.

Two years ago, a Saudi-led Arab coalition intervened in Yemen in an effort to restore the former president to power, the continuing effects of which have caused civilian casualties, famine and destruction. The possibility that the JDAM kits would be used to upgrade the country’s unguided bombs to so-called “smart bombs” for use in the Yemeni conflict was “looking to be one of the big factors” that could derail the deal, Daniels said. Senators voted 53-47 in June to approve the sale.

“If the stars align” and the arms deal is approved by Congress, it could generate $240 billion in upkeep and maintenance sales for the systems over the next 10 years, Daniels said.

But it’s unlikely that the Saudis could even pay for the lucrative deal, should it come to fruition, said Bruce Riedel, a senior fellow at the Washington, D.C.-based Brookings Institution, in a June report titled, “The $110 Billion Arms Deal to Saudi Arabia is Fake News.”

The country has been struggling to meet payments on a 2012 deal by the Obama administration to sell $112 billion in weapons over eight years due to low oil prices and the Yemeni conflict, he noted.

“You will know the Trump deal is real when Israel begins to ask for a package to keep the Israeli Defense Forces’ qualitative edge preserved,” he said.

UPDATE: Sen. Bob Corker, R-Tenn., chairman of the Senate Committee on Foreign Relations, announced June 26 via Twitter that he would withhold consent on future arms sales to the Cooperation Council for the Arab States of the Gulf, or GCC — which includes Bahrain, Kuwait, Oman, Qatar, Saudi Arabia and the United Arab Emirates — until there is "a path to resolve the ongoing dispute" between Qatar and its regional neighbors. Saudi Arabia and allies Bahrain, Egypt and the United Arab Emirates imposed a blockade on the Qatari government June 5.