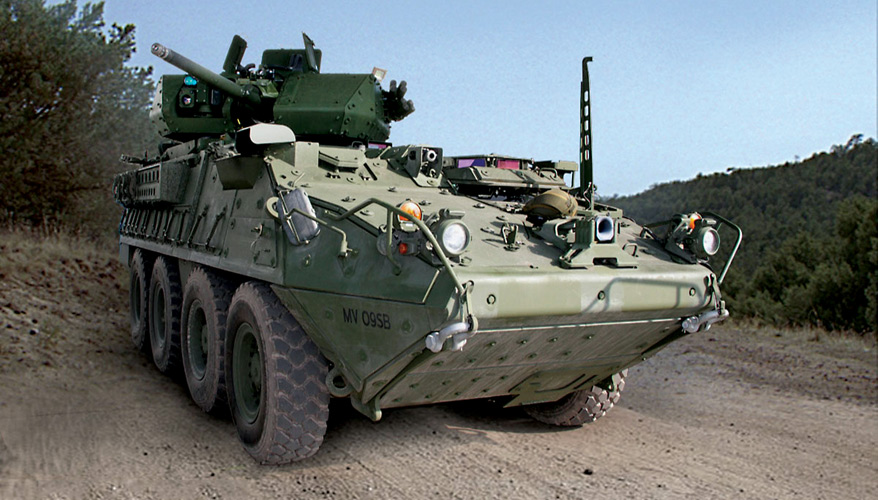 The U.S. Army is working to increase the lethality and mobility of the Stryker armored fighting vehicle.

Thousands of the wheeled platforms are in the Army’s inventory, and the service is working to retrofit a number of them, said Col. Glenn Dean, program manager for the Army’s Stryker brigade combat team at program executive office ground combat systems.

One of the biggest modifications to the General Dynamics-built system is the addition of a 30 mm cannon to some platforms, he said.

“This will be the first new direct-fire weapon system in this family of ammunition that the Army has fielded since we put the 121 mm cannon on the Abrams tank,” he said.

The program stems from the United States’ European Reassurance Initiative, an effort intended to support U.S. partners by funding a persistent, rotational air, land and sea force in the region to deter Russia and to bolster training, Dean said.

The Army is leveraging investments it made during the failed ground combat vehicle and Future Combat Systems programs, he said.

“All that is coming together,” he said during a panel discussion at the Michigan Defense Exposition in Warren. The National Defense Industrial Association’s Michigan Chapter hosted the conference.

The service is testing the system at Aberdeen Proving Ground, Maryland. The Army intends to execute the program quickly, taking only three years from when the requirement was drafted to fielding. The cannon will be deployed on a Stryker next year, he said.

The addition of the weapon will result in a significantly new capability for the armored vehicle, he said.

“The Army does intend to put this cannon capability … across the entire Stryker fleet,” he said. “We’re looking right now to what our requirements and our acquisition strategies would be to do that for the cannon-armed Stryker.”

The Army is also working to increase the platform’s mobility and survivability, Dean said.

The effort is part of a program known as the Stryker engineering change proposal, or ECP.

“We still have some reliability tests ongoing, but initial production contracts are in place and they’ll actually start rolling … these production vehicles off the line a little bit later this year,” he said. In 2018, the Stryker ECP will start operational testing, he added.

“It can take a full suite of combat kits and really not be degraded at all in performance,” he said. “We’ve got a great capability there, but we’ll apply it very slowly to the overall fleet. Eventually, we’ll upgrade all these systems.”

In written testimony to the House Armed Services Committee’s subcommittee on tactical air and land forces, Lt. Gen. John M. Murray, deputy chief of staff of the Army, G-8, and Lt. Gen. Paul A. Ostrowski, military deputy at the office of the assistant secretary of the Army for acquisition, logistics and technology, said the service’s Stryker brigade combat teams were “deficient in the appropriate combination of mobility, lethality and protection required to achieve overmatch during joint and combined arms operations.”

The integration of the 30 mm cannon and improvements to mobility, power and network integration would help resolve some of that deficiency, they said.

Murray and Ostrowski noted that if given the proper resources, the Army could accelerate lethality upgrades to the Stryker.

The service also intends to equip the platform with an active protection system.

“On the ground, our combat vehicles lack the ability to effectively detect, track, divert, disrupt, neutralize or destroy incoming missiles,” they said.

To mitigate this, the Army plans to expedite the installation of commercially available active protection systems on Stryker brigade combat teams in Europe by the end of fiscal year 2020, they noted.

“It has become pervasive in the Army’s force structure but is not designed for the kind of high-end conflicts that the Army is beginning to plan for,” he said in an email. “To be viable on these battlefields, it needs to be more capable.”

James Hasik, senior fellow for defense at the Brent Scowcroft Center on International Security at the Atlantic Council, a Washington, D.C.-based think tank, said the 30 mm cannon upgrade is a response to Russian aggression in Europe.

The system is “intended for force-on-force combat in a place like Poland or the Baltic states against an adversary who has got infantry fighting vehicles” or has personnel carriers equipped with medium-caliber weapons and machine guns more powerful than the 12.7 mm gun on the Stryker, he said.

The Army doesn’t want the platform to go against a Russian BMP, an amphibious tracked infantry fighting vehicle that is equipped with a large cannon, Hasik said.

Before the Army started the cannon upgrade, it didn’t have a weapon on a Stryker that could penetrate any kind of moderately advanced armored vehicle, he said.

While the cannon is targeted toward a conflict with Russia, such a capability could also be useful in the Middle East, Hasik said.

The cannon “can reach out and touch somebody much farther away in a place like Afghanistan than you can with the 12.7” mm machine gun, he said.

The Army is also working on the system’s survivability, equipping platforms with a double-V hull that would protect it from improvised explosive device blasts, he noted.

The improved hull “is really designed for counterinsurgency kinds of stuff. But you don’t expect to see … [that] in places like the Baltic states,” Hasik said.

While large landmines could be used in the region, it is more likely that they would be intended to disable the vehicle rather than kill the occupants, he added.

The new hull will give the Stryker a similar capability to the mine-resistant, ambush protected vehicles that were rushed into the field in the late 2000s to respond to the growing IED threat in Iraq and Afghanistan.

“It’s very much trying to make a Stryker like a classic MRAP. And why not?” Hasik asked. General Dynamics “should be commended for that, it makes a lot of sense.”

Wheeled 8x8 and 6x6 vehicles generally perform well during underbelly blasts, he noted. As the platform’s automotive parts separate during an explosion they carry away much of the blast energy.

“That blast energy is not then available to translate up and into the hull,” he said. “That’s the advantage over a tracked vehicle, which unfortunately … with a flat bottom tends to trap the energy underneath.”

The V-hull is an old but valid concept, he said. By putting a double hull on the Stryker, that will add even more energy attenuation during an explosion, he noted.

While the Army has aspirations to make a number of modifications to the platform, Hasik said the service has other of priorities that may divert funding.

Additionally, it is unlikely that General Dynamics will have luck selling the platform internationally, Hasik said.

“They could sell Stryker through an American foreign military sales project,” he said. “There was discussion about whether the Israelis were interested in one, … [but] that was almost 10 years ago, and we haven’t heard a lot since then.”

The problem is that the 8x8 vehicle market is extremely crowded from a supplier standpoint, he said. “It’s crowded enough that if you’re not in it, it probably doesn’t make sense to get in it,” he added.

While the Stryker might not have much sales potential abroad, General Dynamics Land Systems Canada’s light armored vehicle — of which Stryker is based — will likely have better success, he said.

The company “has run into a bonanza of future sales from the previous Canadian government’s decision, which has not been overturned by the Liberals, to sell a whole bunch of arms to the Saudis,” he said. That will include the sale of LAV 6s.

General Dynamics did not make a subject matter expert available to discuss the Stryker.

The US Army should look into buying the Stryker howitzer, which has already been tested. A Stryker howitzer would really enhance the mobile precision fire support for the SBCTs as it can lob six shells 31KM in a minute and has enough firepower with over 40+ 105mm shells.

Another option would be to make a Stryker drone carrier with an open top hatch (like the mortar carrier without the mortar), but fly drones out of the roof hatches and drive UGVs down the rear ramp. So this Stryker variant will be a UAV and UGV carrier with the appropriate displays and drone command and controls inside.

There are many options to increase Stryker lethality besides just adding the 30mm turret, but this requires purchasing new modified Stryker variants or converting existing ones since the US Army has around 4,400 Strykers in its inventory.