Fuel Cells Fail to Make Inroads With the Military (UPDATED) 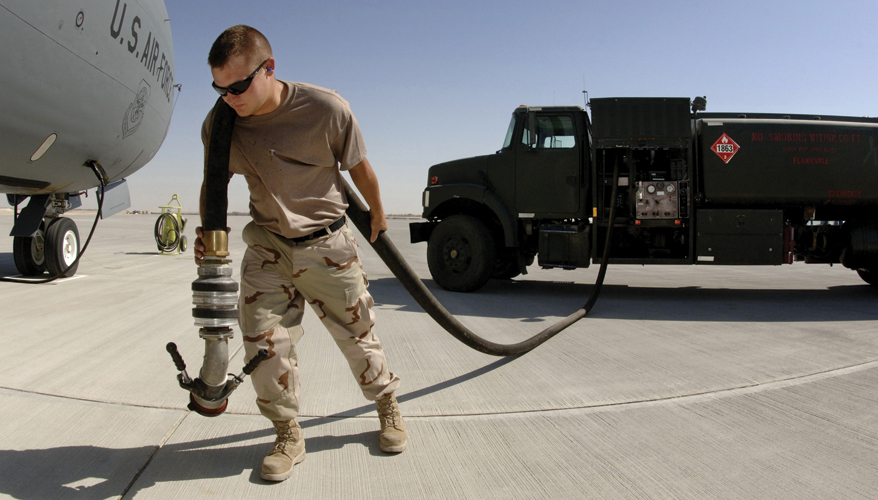 After more than a decade of development trying to adapt fuel cells for expeditionary operations, the technology has failed to make inroads with the U.S. military.

However, work continues to overcome some of the hurdles preventing them from reaching battlefields.

But fuel cells intended to be worn by dismounted troops currently are not providing enough energy to justify the extra weight, he said.

“To burden the soldier with another device or capability that only covers a part of that energy demand gap is not something that we want to do,” he added.

For years, technologists have been touting the potential of fuel cells in the military as the number of devices requiring battery power have proliferated and the burden of transporting fuel in danger zones came at the cost of treasure and lives. Proponents praise the technology as clean, quiet and highly efficient.

Fuel cells are an electrochemical device that combines hydrogen and oxygen to make electricity. The oxygen comes from the air, but the hydrogen must come from a second source — most often fossil fuels like natural gas or propane or alcohol-based fuels like methanol.

They can be small enough to juice up electronic devices worn by troops, or large enough to power forward operating bases not connected to an electrical grid.

The technology still faces one major hurdle. The services made a decision in the early 1990s to have one primary fuel in order to simplify the supply chain — JP8. But the military’s fuel of choice doesn’t work well as a source of hydrogen. For logistical purposes, the military will not be transporting propane, methanol or other fuels into the field.

Feeding the fuel cell with oxygen is relatively simple. That comes from air. Hydrogen is another matter. It is difficult to distribute and store. To convert these common fuels into hydrogen, there must be a “reformer.” If the reformer lets too many impurities through, it poisons the fuel cell, making it less efficient, or disabling it entirely.

Both diesel and JP8 are complex compounds with hundreds of chemical ingredients. For example, both have high sulfur content, an impurity that quickly chokes fuel cells.

Meanwhile, the quality of jet fuel is highly variable. The sulfur content depends on where it is bought. The U.S. market may have lower sulfur content, but the military buys its fuel regionally.

It will not be, for example, hauling lower sulfur fuel from U.S. refineries halfway around the world to Afghanistan or Iraq, experts have said.

Jet fuel refined in the United States may have a sulfur content of 15 parts per million. In the first Gulf War, the military bought fuel from Saudi Arabia with a 3,000 parts per million ratio.

Shailesh Shah, fuel cell team leader at the power source branch at the Army Communications-Electronics Research, Development and Engineering Center, said the Defense Department invested a great deal of funding in the technology, but it has tapered off since 2012.

While fuel cells must be lightweight and ruggedized for military use, the “one fuel” policy remains the main sticking point, he said.

Systems that use hydrogen sources other than JP8 are relatively mature and there are no insurmountable problems preventing them from being fielded, he told National Defense.

The military is on its own in solving the jet fuel-reforming problem. No commercial or government research labs, or the Department of Energy, are working on reforming JP8 into hydrogen.

“We are trying to keep the research base alive,” Shah said.

Subir Roychoudhury, vice president of research and engineering at Precision Combustion Inc., is working on a fuel cell that uses JP8.

It’s at a technology readiness level 5, with 9 being ready for fielding and manufacturing, he said. It has one filter for the ultra-low sulfur diesel found in domestic fuel and can add an extra trap to filter out the sulfur in the overseas fuel.

Other traps use tightly compacted pellets to absorb the sulfur and prevent the fuel cell from being poisoned. After about 50 hours, the sulfur breaks through the pellets.

The Precision Combustion cell uses a catalytic reductive de-sulfuration approach. It coats zinc oxide on a mesh to trap the impurity. The more meshes used, the longer the fuel cell lasts. It can go 225 hours before the sulfur breaks through. The replaceable trap can be swapped out at that point, Roychoudhury said.

“Obviously it requires sensors so you can change the sulfur trap as needed,” he said.

The company has shrunk its reformer down to about 22 pounds with a goal of getting an overall one-kilowatt soldier portable system by 2019 to 35 pounds after adding all the other components. A two-kilowatt system for unmanned aerial vehicles and a 10-kilowatt system for ground vehicles are also in the works.

“That’s a tight target but we think we have the basis to be able to get there,” he said.

The Navy Research Laboratory is investing in fuel cells to see if they can do a better job powering small unmanned aerial vehicles.

Forrest Harrington, business and program development lead at Protonex Technology Corp., said the service is looking at the technology because combustion engines on its smaller UAVs require too much maintenance.

“There are a lot of cost-savings over the life of the platform when you switch to fuel cells,” he said. In addition, they can extend the duration of the vehicle and are much quieter.

“It seems like everyone can make a … fuel cell nowadays. But what we found is that to make one that is reliable and rugged for the military, that is easy to manufacture and is not extremely expensive — that’s actually pretty challenging,” Harrington said.

If the military should ever allow a non-JP8 fuel on the battlefield, Shah said he sees great promise in aluminum hydride, also known as “alane.” CERDEC has provided funding to develop a system using the fuel.

“We are looking for a superior fuel … something that can change the game in terms of the raw material you’re using to supply energy,” said Daniel Braithwaite, vice president of product development at Ardica Technologies.

Alane is a solid-state fuel comprising hydrogen bonded to aluminum. It was first developed as a rocket-engine propellant, but is now seen as an efficient stock for fuel cells. It’s lightweight, nontoxic and stable. It could be stored for decades with no measureable degradation, Braithwaite said.

The fuel is heated up with a hybrid battery so the hydrogen is separated out in one step. It requires little heat to start the chemical reaction so there is a large net gain in the amount of energy produced, he said.

The company has developed a wearable fuel cell for CERDEC using alane that is roughly the size of a conformal battery worn behind a breastplate. The alane is in a cartridge. The system is a little under 2.8 pounds and provides a steady stream of power. It has been tested at Army warrior experiments and is at about a technology readiness level 6, he said.

“We have hot-swap capability,” he said. “Pop out the old cartridge — the hybrid battery is keeping the system running — put in the new cartridge and keep going.”

Other military R&D organizations are starting to take notice of alane’s potential. Ardica is also working with the Naval Undersea Warfare Center to use alane fuel cells that would be employed with a separate air-generating system to create oxygen, Braithwaite said.

It’s also partnering with the Tank and Automotive Research and Development Center on a project to use an alane fuel cell to power an all-terrain transport vehicle. TARDEC has one that works with compressed hydrogen and it now wants to see if alane is an option.

The drawback to alane is that it is difficult to manufacture.

“We have put significant time and effort into the production process of the material itself,” Braithwaite said. It’s hoped that the efforts will bring its costs down.

CORRECTION: This article has been updated to reflect that Protonex uses compressed hydrogen for its proton exchange membrane fuel cells.