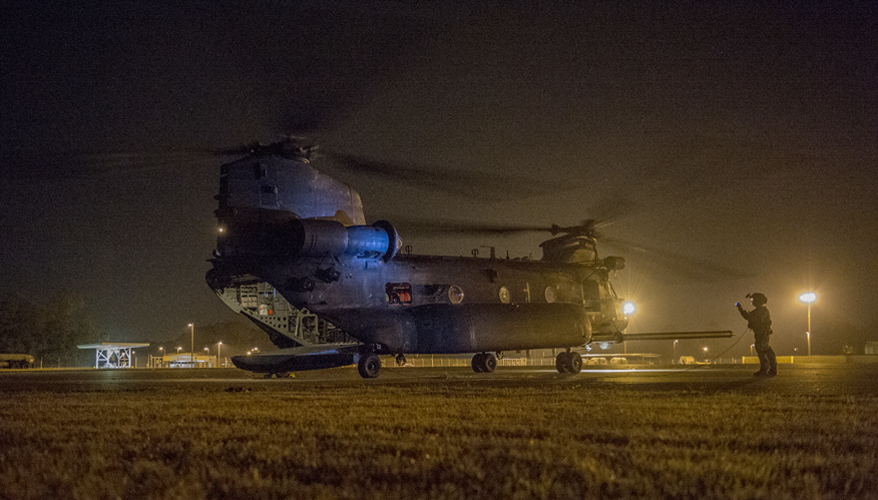 The command has worked to remove 1,000 pounds from the MH-47G aircraft — a special operations version of the Boeing-built CH-47 Chinook — by performing multiple upgrades including removing electrical redundancies, installing a new cockpit and lighter pilot seats, along with an improved under-armor system, said Army Lt. Col. Mac Cornish, technology applications program officer for the MH-47G under PEO rotary wing.

Of the 69 airframes currently in the fleet, 23 were originally built as alpha models between 1964 and 1966, Cornish said at the National Defense Industrial Association’s Special Operations Forces Industry Conference in Tampa, Florida. Over 50 percent will have achieved 10,000 flight hours by 2020, he added.

“Things are starting to affect these airframes,” he noted, adding that the command has “arguably the oldest sheet-metal fleet in the Army.”

Over the last three years, eight new MH-47 modified airframes were delivered to the command straight off of the Boeing production line, he said. Since receiving the new aircraft, SOCOM completely reconfigured the electrical wiring system, installed lightweight soundproofing and relocated crew positions in an attempt to take 1,000 pounds off the payload, Cornish said. The legacy aircraft currently weigh in at 54,000 pounds, he noted.

SOCOM is now working with the Army to develop a Block II airframe for the Chinook that will feature a common structure between the service and the command aircraft versions, he said. Joint features include an advanced rotor blade, an improved drivetrain and upgraded nose, he added.

“If you’re an industry partner out there and you’re working with someone within the community, whether it’s Army or if it’s SOF, just know that your component could potentially be installed on both types of airplanes,” he said. The special operations version will feature over 170 SOF-only components, he noted.

The office is considering placing new engine-barrier filters co-developed with the Army on the Chinook, which could take about 80 pounds off the aircraft, he said. It also plans to replace the current hydraulic hoist system with an electrical version, he added.

The command is also interested in developing a next-generation engine for the MH-47, he noted.

The program office is “in the margins” of achieving that 1,000-pound weight loss, Cornish said. “It’s a huge deal.”

The new aircraft is going into production “right now,” he said. The first lot will be ordered in fiscal year 2018, with deliveries expected to begin in 2020 and run until 2026 to 2028, he said. About 542 total Block II aircraft are expected to be built, 69 of which will be the SOF-specific G model, he added. The command expects one to two G-model aircraft to be delivered each month.

The command’s vision for the MH-47G renew program will keep the platform in service until the future vertical lift variant can replace it, Cornish said.

The Army’s highly anticipated future vertical lift program will eventually replace thousands of helicopters by the 2030s with a vertical take-off and landing system. Bell Helicopter and a Boeing-Sikorsky team are currently preparing for flight trials of the joint multi-role demonstrator that will inform requirements for FVL, officials previously told National Defense. Bell is offering the V-280 Valor and Boeing-Sikorsky will pitch the SB-1 Defiant.