Marine Corps Could Boost its JLTV Purchase by Thousands (UPDATED) 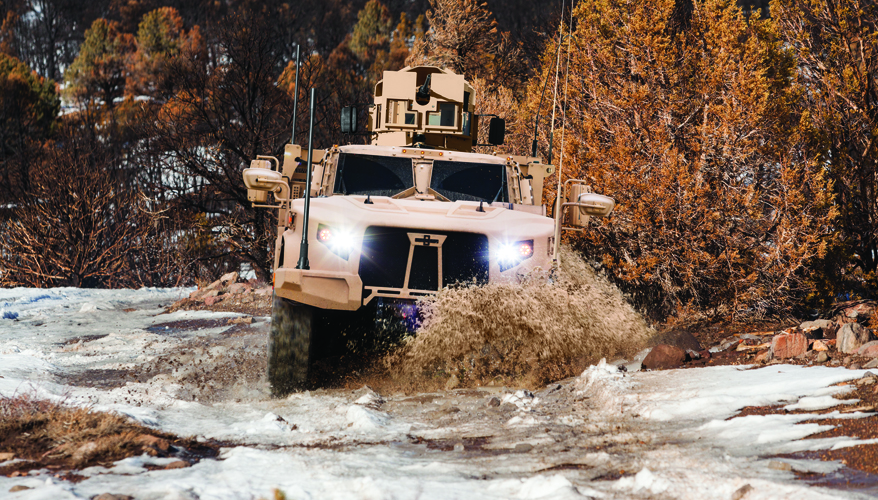 The service has committed to an acquisition objective of 5,500 platforms, but could boost that to more than 9,000 if it were given the proper funding, Andrew Rodgers, Marine Corps’ program manager for light tactical vehicles, said at the National Defense Industrial Association’s annual Tactical Wheeled Vehicle Conference in Reston, Virginia.

“That represents over half of all our light tactical vehicle fleet,” he added.

The JLTV is meant to replace a portion of the service’s 17,000 Humvees. The joint Army-Marine Corp program is working to procure more than 55,000 vehicles.

In 2015, Oshkosh won a $6.7 billion low-rate initial production contract to procure an initial 16,901 vehicles for the Army and Marines, according to a Congressional Research Service report.

The Marine Corps recently received enough funding to increase its numbers to 7,241 vehicles, he said during a panel discussion. However, as the service works through its program objective memorandum for fiscal year 2019, that could change, Rodgers said.

The Marine Corps has been crunching the funding data, he said. “The JLTV can’t take … a significant portion of the Marine Corps’ ground tactical vehicle budget without having second order effects,” he added.

If the program office ends up taking cuts, the service will likely procure somewhere in the high 6,000s, he said. Rodgers pledged that the Marine Corps would never buy less than the 5,500 platforms it codified in the original acquisition objective, he added.

Adjustments in its overall acquisition plan will be made in the near term, he said. For now, no timeline has been set for when the service could reach different acquisition objectives.

For the Army, the JLTV will consume 64 percent of the service’s transportation portfolio’s budget, said Scott Davis, the program executive officer for PEO combat support and combat service support.

“How big of a deal is that? Well, it’s the same portfolio that all the lights, mediums, heavies, watercraft are part of,” he said. “So when we talk about keeping the force relevant and being more adept at force projection, all those systems contribute to that and there’s only a limited amount of money in that pie.

“I think we’re starting to get some Army attention that … if you really want watercraft, and you want to sustain very large fleets of tactical vehicles, we may have to go outside the portfolio to find the resources to do that,” he said. “There’s just not enough flexibility inside to do everything they want to do.”

Correction: A previous version of this article misstated the maximum number of JLTVs the Marine Corps would like to purchase.