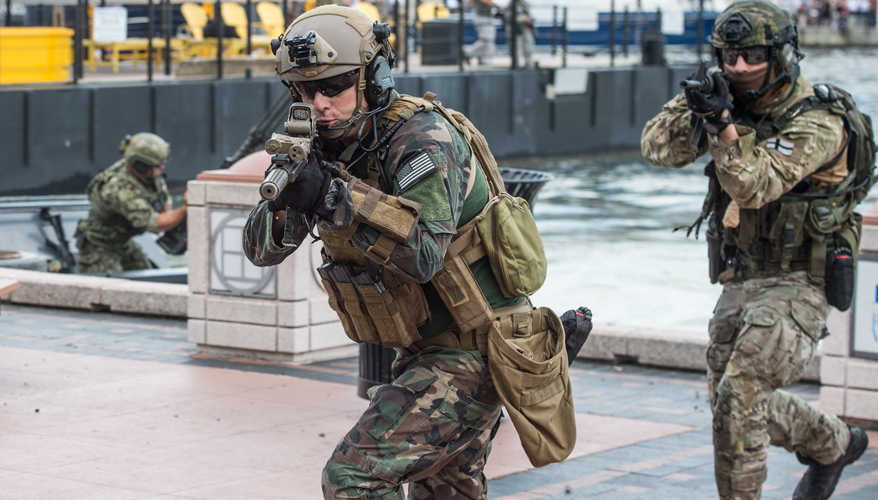 Special Operations Command kicks off its largest conference of the year May 15 in Tampa, Florida, as it takes on new responsibilities at the Pentagon.

Certain to be discussed at the annual Special Operations Forces Industry Conference is the command’s new roles as the lead Defense Department organization coordinating both the counterterrorism and the counter-weapons of mass destruction missions.

The responsibility of synchronizing the counter-weapons of mass destruction mission for the Defense Department was recently transferred from U.S. Strategic Command to SOCOM. In this role, the command will be responsible for establishing intelligence priorities, monitoring global operations and conducting assessments.

It will also be the designated coordinating authority for trans-regional terrorist organizations and other threat networks.

“We are no stranger to adapting and building our network, and we have embraced this mission as we do all others — bringing focus and energy to some of the nation’s most complex challenges,” SOCOM Commander Army Gen. Raymond A. Thomas III, told the Senate Armed Services Committee in a May 4 hearing.

Thomas, who will be the keynote speaker at the conference May 16, expressed a little less confidence as the Defense Department shifts its focus to preparing for conflict with near-peer competitors.

“Although [special operations forces] are effective across the spectrum of conflict, we are most optimally employed ‘left of bang’ – pre-crisis,” Thomas said.

“Our effectiveness over the last 15 years does not necessarily equate to success against near-peer competitors,” he added. Special Operations Forces are now deployed in nearly every European country on Russia’s western border, he noted. The command now considers the Russia mission its second top priority after counterterrorism, Thomas said.

“Our current focus consists of assuring our allies through building partner capacity efforts to counter and resist various types of Russian aggression, as well as enhance their resilience,” he said.

About 11,000 attendees are expected at the four-day conference with some 400 exhibitors, according to the organizer the National Defense Industrial Association. Many of those vendors hope to do more business with SOCOM, or get their foot in the door as it expands its missions.

“Our current budget supports recapitalizing our platforms as well as developing our technological capabilities for dealing with near-peer competitors and competition short of armed conflict,” Thomas said.

The agenda devotes a great deal of time to the tactical assault light operator suit (TALOS), more popularly known as the Iron Man suit, a system designed to protect commandos from bullets and blasts as they bust down doors in counterterrorism missions.

SOCOM Acquisition Executive James “Hondo” Geurts has repeatedly said the command is on track to produce a prototype TALOS system by its deadline in 2018, while at the same time admitting that there are some major technological hurdles to overcome between now and then, particularly power issues, software that helps the operator control the exoskeleton’s movements and communication links.

“We continue to look for ways to onboard process or bring in data for situational awareness,” he said at an NDIA conference in March. Geurts will give a presentation on the command’s technology needs May 16.

Attendees will also hear from SOCOM’s program managers for rotary and fixed-wing aircraft, as well as those in charge of maritime technologies, communications and warrior ensembles. A panel of service component and sub-unified command leaders will also speak to their technology requirements.

Check National Defense Magazine May 16 to 18 for updates from the SOFIC conference.