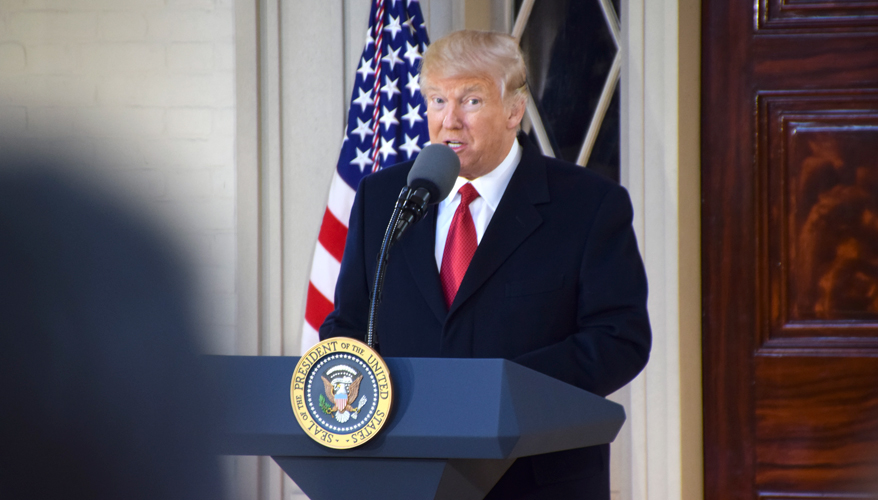 President Donald Trump issued an executive order April 18 ordering federal agencies to purchase American-made products to the maximum extent possible, and review their contracting policies and processes in this regard. But analysts expect the directive to have limited impact on Pentagon acquisitions and the defense industrial base.

The executive order, “Buy American and Hire American,” stated: “In order to promote economic and national security and to help stimulate economic growth, create jobs at decent wages, strengthen our middle class, and support the American manufacturing and defense industrial bases, it shall be the policy of the executive branch to maximize, consistent with law, through terms and conditions of federal financial assistance and federal procurements, the use of goods, products and materials produced in the United States.”

Within 150 days of the order, agencies are expected to: assess their compliance with existing Buy American laws; assess the use of waivers within their agencies and their impact on domestic jobs and manufacturing; and develop and propose policies that would ensure compliance with Trump’s objectives.

Defense industry analysts said the sentiment behind the directive isn’t a new approach.

“Trump’s order is confirming a longstanding bias in favor of American producers,” said Loren Thompson, chief operating officer at the Lexington Institute and an adviser to defense contractors.

“Defense is largely a protected market because of security concerns,” he added.

The Buy America Act has been in place since the 1930s, noted Andrew Hunter, director of the defense-industrial initiatives group at the Center for Strategic and International Studies.

The long-standing policy tries to balance a desire to promote domestic jobs while also reaping the acquisition benefits that accrue from allowing foreign suppliers to compete for U.S. government contracts, he said.

“We won’t know until the review comes back and they start implementing policy. But … the current policy is pretty robust and I don’t see it fundamentally changing as a result of this review. And I don’t think it would be positive for the DoD if it did change fundamentally, because I think the balance that’s being struck today is reasonably good,” he added.

“You can’t be a first-rate military power if you’ve lost the industrial sinews of your economy,” he said.

But in the near term, there are areas where it would be difficult to buy critical defense-related equipment from domestic manufacturers, he noted.

“Frankly the biggest challenge he faces is how much industrial capability the U.S. has lost to make everything from specialty steel to computer chips,” Thompson said. “Electronics are the heart of modern weapons systems, and yet the global electronics industry has largely migrated offshore.”

The Defense Department needs to be able to waive Buy American restrictions in certain cases to satisfy urgent wartime requirements or acquire items that need to be imported, analysts said.

“The president’s order is setting the tone for how future acquisition should be done, but there will always be leeway for cases where it’s more sensible to go to foreign suppliers for whatever reason,” Thompson said.

“When you look into that data, what you find is the vast majority of the waivers are tied to our overseas operations,” he said. “There’s nothing that jumps off the page to say, ‘Oh boy, that’s a giant loophole you might want to close.’

“My sense is not that DoD has been applying it willy-nilly and making lots of exceptions,” he added.

Trump’s executive order — which the White House rolled out with great fanfare — might be more of a symbolic gesture to satisfy the president’s political base, rather than to actually shake up industry, said Richard Aboulafia, vice president of analysis at the Teal Group, an aerospace and defense market analysis firm.

During the 2016 presidential campaign Trump promised to put “America First” and provide a shot in the arm to the manufacturing sector of the U.S. economy.

“I kind of suspect that he’s eager to give his base something that implies he’s adhering to his original spirit,” Aboulafia said.

Trump has already backed off on many of his protectionist trade policy positions since taking office, he noted.

“He’s completely reversed himself, to his credit,” Aboulafia said. “The aircraft industry can thank him for his complete about-face. But on the other hand, you’ve got to throw some red meat to the base, and this [executive order] might be part of that.”

Moving full bore to cut foreign firms out of the Pentagon’s supply chain would be “ridiculous and untenable,” he said.

Some Pentagon acquisition projects such as the F-35 joint strike fighter involve system components made by a number of overseas companies.

Trump “could take full credit for increasing unit costs by 50 percent if they tried to re-engineer the entire supply chain” to benefit U.S. firms at the expense of international ones, Aboulafia said.

Industry shouldn’t be too concerned about the executive order, he said.

“One hundred days ago there were valid reasons for Mexico or China to be deeply afraid of trade barriers and outright trade hostilities,” he said. “In the past 10 days though, those have vanished and I expect this one will too.”

Defense Industry Waiting for the Fog to Lift