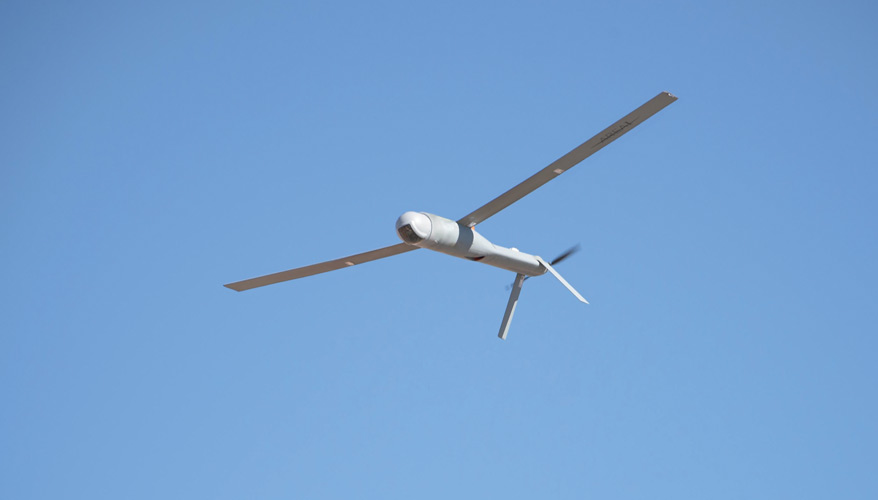 Air Force Special Operations Command wants to launch spy drones from its gunships to collect critical intelligence, surveillance and reconnaissance information. The program to develop the technology is approaching a key transition point.

Tactical off-board sensing capabilities, also known as TOBS, would give AC-130 crews the ability to see the battlefield when their onboard sensor views are obscured.

Lt. Gen. Brad Webb, the commander of AFSOC, described how the technology could be used during a hypothetical raid to capture a high-value terrorist target.

The team leader on the ground “knows that the cloud cover will make it difficult for traditional ISR to be of much use,” Webb told an audience at a recent conference in Washington, D.C. The commando “keys his radio and calmly states, ‘Send the TOBS.’”

Webb continued: “Thousands of feet and miles away an orbiting AC-130J gunship receives the call. … The operations airborne mission commander presses the illuminated launch button. The TOBS air vehicle slips out of its common launch tube and starts to autonomously fly towards the team’s location. … It slides below the cloud deck giving the asset its first opportunity to view the team on the ground.”

Feed from the sensors would be transmitted back to the gunship where operators could manipulate picture framing, zoom levels and positioning. The TOBS system would remain overhead maintaining a continuous scan for any surprises or threats until the weather situation improved and it was no longer needed, Webb noted.

Such a scenario is “100 percent feasible and realistic,” he said.

Tactical off-board sensing is on the “top shelf” of AFSOC’s innovation priorities, he told National Defense at the conference.

Last year, the organization experimented with deploying Raytheon’s Coyote unmanned aerial vehicle from an AC-130W. Tests and crew training were conducted at the Melrose Range near Cannon Air Force Base, New Mexico. The system was later deployed to the Central Command area of operations — which covers most of the Middle East and Central Asia — for combat experimentation and evaluation, according to an AFSOC spokeswoman.

The experiments provided operators the opportunity to refine tactics, techniques and procedures for using tactical off-board sensing technologies. But the Coyote does not meet AFSOC’s endurance requirements, officials said.

The Air Force Research Laboratory, which has been shepherding the TOBS program, is planning a technology demonstration in August with a different drone that has extended endurance. The air-launched, tube-integrated unmanned system, known as ALTIUS, will be launched from an AC-130.

“We’re going to run through a basic mission which is send the UAV off to look at something,” Jason Bowman, the TOBS program manager at AFRL, said in an interview.

“We’ll look at it for a little bit, try to get a sense of how well the gimbal on the UAV is performing … and basically see if we’re hitting our gimbal” key performance parameters, he said.

The process could be repeated by sending the drone to observe other targets during the demonstration, he added.

The objective is to “give AFSOC and SOCOM confidence that the system is at a point where we can move forward with it for real gunship integration,” he said.

AFRL has already deployed the equipment from surrogate aircraft such as Cessna Caravans and civilian C-130s.

“From a technical perspective we’ve actually demonstrated a lot of what AFSOC has asked me to do, but of course ... they actually want to see it on the real thing,” Bowman said.

If the demonstration is successful, the project will transition into a SOCOM-led program of record in early fiscal year 2018. The target date for initial operating capability is fiscal year 2020, officials said.

AFRL will continue to focus on technology development and maturation through fiscal year 2019.

“It’s certainly not ready for primetime,” Bowman said. “There are still things we’re working through” such as reliability and manufacturability.

Area-I, a Kennesaw, Georgia-based company that builds UAVs, has been a major contributor to the TOBS effort. It designed the ALTIUS for the Air Force Research Laboratory under a small business innovation research contract.

“We’re 80 percent there” on the path to developing a solution that could be fielded, said company CEO Nicholas Alley. “The hard stuff has largely been taken care of and we can see the light.”

Many pieces of the puzzle must come together for the system to work properly, he noted.

“It’s not just aerodynamics, it’s not just structures, it’s not just flight controls,” he said. “It’s [also] payload and power management and range and endurance and modem. It is a really hard problem. … We’ve not had to tackle anything this challenging.”

“That is really important to our operational guys,” he said. “We don’t want to add another person on the airplane to have to pilot a UAV.”

After the program transitions to SOCOM, the command will be looking to industry to provide drones, sensors and other technologies to advance tactical off-board sensing capabilities.

“We’re trying to build an architecture that is UAV agnostic … where we tell industry, ‘If you bring us a UAV that fits into this [common launch] tube, we can now integrate it into a gunship very quickly,’” he said.

That requirement places severe size constraints on the drones and its sensors because a common launch tube is only six inches in diameter and four feet in length.

“The challenge is trying to build a UAV around that tube that still meets our needs” when it comes to weight, power, range, endurance and sensor capabilities, LaFleur said.

ALTIUS, which weighs 20 pounds, is expected to meet the performance parameters.

“We were looking at a lot of exotic propulsion systems but we realized that there was also a way to do it with basically an exotic airframe design,” Alley said. “We came up with a really good airframe design.”

Using low-cost, conventional batteries the company was able to meet the endurance and power requirements, he added. 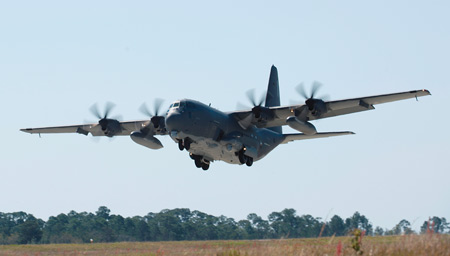 For the past several years AFRL has been struggling to identify a radio that could meet the range requirement but also integrate with the ALTIUS, Bowman said.

“We’re quickly narrowing down on a final radio,” he said. “Hopefully that will be taken care of pretty soon.”

Finding sensors that meet both the capability and cost requirements has been another challenge. SOCOM wants night vision and potentially infrared sensing capabilities for its drone-mounted cameras.

But until recently, the gimbals for small drones have had limited functionality, Bowman said.

Officials now want small UAV gimbals to provide capabilities similar to “what the big guys are flying with,” he said. Their pointing accuracies are getting much better and image clarity has greatly improved, he noted.

However, many gimbals are too expensive for AFSOC’s tastes since the drones are meant to be expendable, he said. The types that the command would be interested in are currently in the $150,000 range.

“The bigger challenge is really cost,” Bowman said. “I have to find a way to put all that capability into that gimbal and then have it be cheap enough where I can throw it away. And there’s really just a few gimbal companies out there that can really meet all of my requirements right now.”

The target cost for a full system — including the UAV, gimbal, launch tube and other components — is about $100,000.

One trend contributing to the problem is industry often has higher quality control measures for sensors than AFSOC requires when it comes to things like pixel failure rates. Tradeoffs in this area could be used to bring down the price tag, Bowman said.

“In an expendable system are you willing to live with a few bad pixels? Probably. Especially if it means halving the cost,” he said.

Bowman expects to have sensors that fit the bill when it comes to size, weight power and cost in time to meet the fielding schedule.

Area-I and AFRL have teamed up to serve as system integrators for the early TOBS work. In the future, industry will be expected to perform that role.

“It will be the UAV manufacturer’s responsibility to go get the gimbal, to integrate it with the UAV, and then provide it to the Air Force as a round that’s ready to shoot when it’s delivered,” he said.

Webb foresees a time when the drone and the equipment it carries won’t need to be expendable because gunships will be able to recover them in flight. That is “obviously the ultimate challenge and that’s probably the lagging piece of the technologies,” he said.

In the meantime, it would be ideal for the UAVs to be able to fly to an area controlled by friendly forces to be recovered. But that may not be feasible in many situations, officials noted.

Right now there is no requirement for the drones to be recoverable.

“I’ve got enough problems” to deal with, Bowman joked.

Down the road, Webb hopes to have a communications architecture in place that would allow the UAV to transmit its video feed to other locations besides the gunship that deployed it, to include other aircraft, ground forces and command posts hundreds of miles away.

“It’s certainly going to be a challenge and it’s not something we can snap our fingers and it’s done,” he said. “But it is absolutely I think within the realm of the possible given the state” of technology that is being developed.

Gen. Mike Holmes, the commander of Air Combat Command, said he expects his organization to be involved in building the network that would enable the intelligence-sharing that Webb envisions. That could require a change in the way the Pentagon has been buying communications equipment, he suggested.

“For many years we’ve kind of bought different systems that were proprietary from different companies and we tried to link them together,” he said.

“A decision that we’re going to have to make in the next year or so is how much money do we continue to put into the gateways and translators, and how much money do we shift toward a new waveform, software programmable radios and all the advantages that that brings you in being able to defeat jamming?” he added.

“I’m not sure I’ll buy any but we’ll be part of the team that uses it,” he said. “We’ll be a user … of that ISR to turn it into information that we can use to target in support of special ops command or any other folks,” he said.

Other Defense Department components are also interested in the technology, Alley noted. His company is developing a Navy version of ALTIUS that the service could use for anti-submarine warfare.

“This is going to be a very useful asset for a war fighter,” he said. “Hopefully they’ll get a lot of use and they’ll save a lot of lives and help them do their jobs better. And if that happens, the demand is going to go up” and the technology will continue to improve.