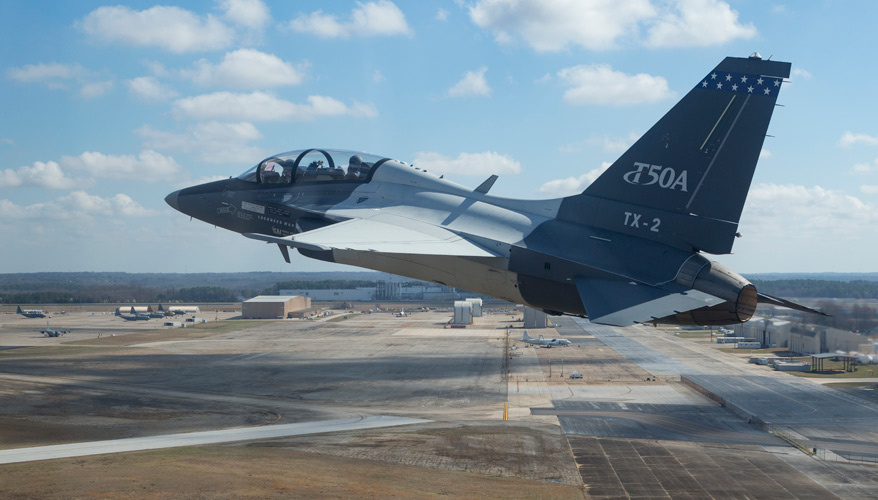 GREENVILLE, S.C. — Should the U.S. Air Force choose Lockheed Martin and Korean Aerospace Industries' T-50A for the service's new advanced pilot trainer system, it would send a strong signal to North Korea of U.S. commitment to security in the region, members of Congress said April 10.

"If you buy this plane, you are sending a signal to North Korea that America not only has [South] Korea's back, but we're one team and one fight," said Sen. Lindsey Graham, R-S.C., at an event at Lockheed Martin's facility in Greenville, South Carolina.

Graham and Rep. Joe Wilson, R-S.C., joined members of Lockheed Martin and KAI, along with South Korean dignitaries, at a ceremony for the T-50A, which is a contender for the Air Force's upcoming T-X program.

The aircraft is based on the T-50, which is used by the Korean Air Force as well as other countries around the world. The proposed T-X version would be built to U.S. Air Force specifications, according to Lockheed Martin.

Buying the T-50A would be "part of an overall message of our standing firm with the people of the Republic of Korea against the dictatorship of Pyongyang," Wilson said.

A Lockheed contract award would also be good for the state's workforce, the lawmakers acknowledged. "It's proof to the people of South Carolina of our love and affection of national defense and jobs," Wilson said.

North Korea has continued to conduct missile tests off the Korean Peninsula. Last week, the Pentagon announced plans to send the USS Carl Vinson Nimitz-class supercarrier to the region, along with the USS Lake Champlain guided-missile cruiser and two destroyers.

"I am one of two people in Congress who has actually been to Pyongyang, and I have seen the contrast between the destitution of North Korea" and the economic success of its southern neighbor, he said in remarks.

Graham said he couldn't think of "a better signal" to send to the North Koreans and the world at large, should the Air Force purchase a Korean-developed advanced trainer system.

"That says a lot about the technology developed in Korea. It shows that this relationship is at an all-time high," he added.

Graham said that purchasing the T-50A would be "a wise use" of taxpayer money. Should it win the program, Lockheed Martin currently expects to have the aircraft ready to deliver under budget and two years ahead of the Air Force's desired initial operational capability date in 2022, said Orlando Carvalho, company executive vice president of aeronautics.

Lockheed Martin submitted its main proposal to the service March 30, Carvalho said. Pre-engineering and manufacturing development testing is already complete, but the company will continue to fly the aircraft in Greenville until the late June deadline to present flight data to the Air Force, said Michael Griswold, director of T-50 business development.

The competition to replace the service's aging T-38 fleet with up to 350 new trainer jets and ground-based training systems is between five teams: the Lockheed/KAI team, a Boeing-Saab team, Leonardo with its U.S. company Leonardo DRS, a Sierra Nevada/Turkish Aerospace Industries team and Stavetti Aerospace Ltd.

Of those competitors, three teams — Lockheed/KAI, Leonardo and Stavetti — are offering commercial-off-the-shelf aircraft, while the Boeing/Saab team and Sierra Nevada/TAI team plan to submit clean-sheet offerings.

Supporting the T-50A is part of a wider fight in Congress to rebuild the military, Graham said.

"We have cut our budget to the bone," he said. "I can tell you this, that there is going to be one hell of a fight over defense spending this year, and we are going to win."

But while Graham and other defense hawks want to spend more on the military, "I also want to get value for our money," as the service struggles to deal with a pilot shortage and aging trainers, he told reporters. "This investment, to me, is about as sound as the Air Force can make."

But the United States needs to preserve its so-called soft power of diplomatic relations as well as raise military spending, he added.

"The Trump budget — while I appreciate the military increase — basically guts the State Department," he said. "So Congress is going to have to work with the Trump administration to increase defense spending, but also preserve the Coast Guard, the [Transportation Security Administration] and … the other aspects of defense."

Graham said Congress is "constantly talking to the administration" about rebuilding the military in a wise manner. "We need to replace a training jet that's 50 years old … I'm really emphasizing the Korea connection," he said. "If you want to reset the world, stand firmly with South Korea and if you want to get value for your money, buy this jet."

Carvalho said the company expects to see increased foreign interest in the T-50A should it win the Air Force contract. Countries including Iraq and the Philippines currently fly the T-50 version, he noted.

As it awaits feedback from the Air Force on the T-X program, Lockheed Martin is also preparing to move its production line for the F-16 Fighting Falcon jet from Forth Worth, Texas, to Greenville, as it expects the United States government to approve a foreign military sales agreement to sell the jets to Bahrain.

Graham said he expects the deal to go through, and expects to see "more and more Mideast nations and other countries throughout the world wanting to buy" the F-16.

Rod McLean, vice president and general manager for Lockheed's F-16/F-22 integrated fighter group, said the company was "confident that we can certainly restart the line here for F-16, as soon as we get the contract award for Bahrain."

"We're excited about getting a lot of support from Congress, so we're looking forward to getting our contract award hopefully by the end of the year," he added.  "We've been preparing for this for some time and we are very excited about the opportunity."

The company is also in talks with the government of India to possibly purchase the F-16, McLean added.

"This is an opportunity that will require our government to make a final decision. … But thus far, we have positive feedback certainly from the Indian government," he said.

Griswold said that by performing the final assembly for the T-50A at its Greenville location, Lockheed would add "a new dimension" to the South Carolina operation, which currently only performs maintenance repair overhaul.

"This would be building a new airplane here," he said, adding that about 250 new jobs would be created to perform final assembly and check out on the T-50A, as well as the F-16, should the contract with Bahrain be approved.

Saab to Expand Footprint in U.S.