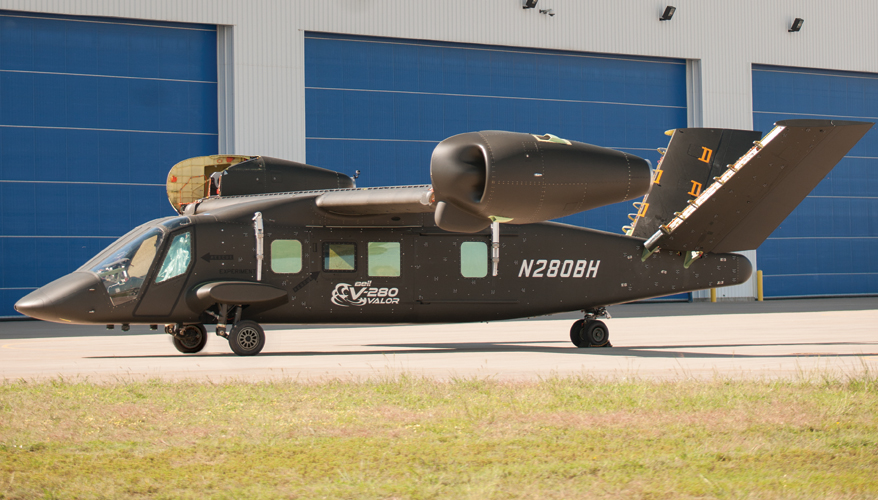 The company has offered the Valor to the Army for its joint multi-role technology demonstration. A Sikorsky-Boeing team is building the SB-1 Defiant. The demonstration is a precursor to the future vertical lift program, which is still in its infancy, and aims to eventually replace thousands of helicopters in the late 2020s and 2030s with a new vertical take-off and landing aircraft.

The Valor is based on Bell’s tiltrotor aircraft, the V-22 Osprey, Josselyn told reporters during a media trip at the company’s Amarillo, Texas, factory.

“We believe this is a game changer and will bring just phenomenal capability to our Army customer,” he said. It will offer “increased speed, agility, payload, performance … all at a cost that’s commensurate to what … [the government is] currently spending on our special missions Black Hawks and Apaches.”

The Valor will benefit from lessons learned from the V-22 and the hundreds of thousands of flight hours it has already banked, he said.

With most of the aircraft built, Bell still needs to install flying gearboxes and blades, Josselyn said. The company anticipates the system will be completed by July, he added.

While Bell is designing the Valor based on the Army’s requirements, it is also considering how it can adjust it for the needs of the other services, he said.

“We do have a team looking at variants and risk reduction opportunities for a marinized version,” Josselyn said.

That would likely include the need to have the rotor blades fold to allow them to stow, said Frank Lazzara, business development manager at Bell’s global military business division. “The Marine Corps is not buying an aircraft that doesn’t have a fold system,” he said.

Lazzara noted that a number of foreign nations are paying attention to the FVL program. Recently, Australia submitted a letter of interest to formally participate in future vertical lift, he said. “The Australians have been very involved,” he added. Lazzara has also spoken with representatives from the Dutch and Japanese governments.

“I’ve been to visit the Dutch. They’re very interested in how this goes,” he said. “They’re also very interested from a technology sharing perspective. They want to be in on the design and build aspect of whatever the program aircraft might look like. Same thing with the Japanese.”

Many countries, however, do not have the budgets that will allow them to meaningfully contribute to the effort, he said.

“Everyone wants to participate but not everyone has the money to bring to the table,” he said. “It’s just everybody’s budgets are tight with defense right now. So they’re more looking to be part of the conversation.”