Marine Corps Showing Love — And Money — for the V-22 Osprey 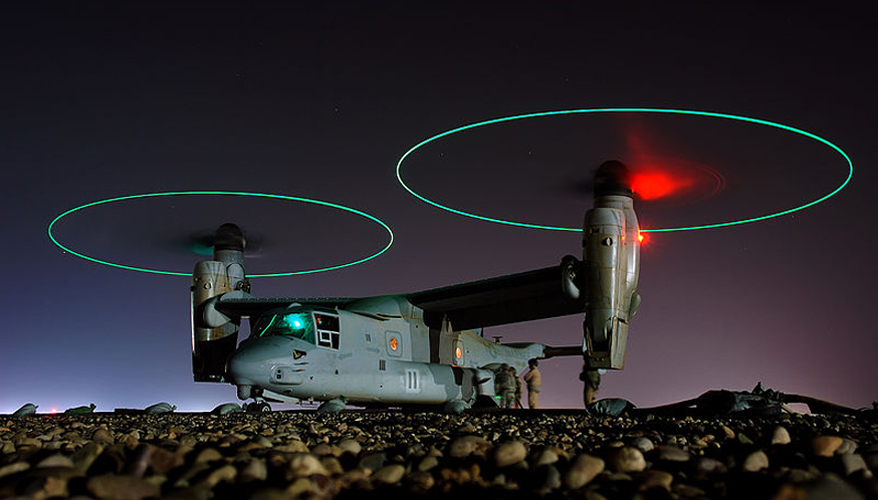 Already one of the busiest aircraft in the military fleet, the V-22 Osprey soon could be taking on more and increasingly sophisticated missions.

Marine Corps leaders never miss a chance to praise the V-22 hybrid vertical-lift turboprop for its technological and operational exploits, pointing to its status as the most in-demand aircraft in military operations today. Officials are enthused by the potential of the tiltrotor aircraft to do more, and are putting forth plans to invest in big-ticket upgrades, including sensors and weapons that would turn the Osprey into a highly destructive gunship, and refueling kits so it can serve as an aerial tanker. They also will seek to buy more of the $72 million apiece aircraft, beyond the 360 approved by the Defense Department.

In its newly released aviation strategy, the Marine Corps lays out an ambitious modernization blueprint for the V-22 fleet, which suggests Marines intend to make it a bigger player in high-end warfare.

“Initial planning has begun to map the next upgrade to the MV-22B,” says the Marine Corps plan. The MV-22 is the Marine Corps variant. The Air Force Special Operations Command has its own version, the CV-22, and the Navy is buying a larger model, the CMV-22, to shuttle passengers and cargo to and from aircraft carriers.

Before it moves forward with combat technology upgrades, though, the Marine Corps will seek to fix a major headache: The Osprey’s growing maintenance demands and sustainment costs.

The Osprey entered service in 2007 after a turbulent decade of development, safety problems and being on the brink of termination. As it transitioned from problem child to superstar, however, the fleet became fraught with maintenance difficulties, prompting a sweeping review that was completed in 2016. Over the past three years, tens of millions of dollars have been allocated for spare parts and repair crews.

Keeping the software current is a huge drain. There are 300 aircraft in operation in more than 70 hardware and software configurations. The goal is to move to a common baseline and an “open architecture” to make upgrades easier and cheaper. For example, the Marines want to equip the Osprey with sensors that can “off-board” data and share it with other weapons systems, including those of other military services and foreign allies.

With the planned addition of two new MV-22 squadrons in Miramar, California, and New River, North Carolina, the Corps will be seeking funding for more aircraft. “A requirements-based analysis is underway to increase the program of record to 380,” the aviation plan says.

More orders would be good news for manufacturers Bell Helicopter and Boeing, which share the program 50/50. They produce about 24 aircraft per year under a long-term deal that would end next year. Bell’s parent company Textron “has been encouraged by the talk in D.C. around additional V-22 orders,” notes industry analyst Robert Stallard, of Vertical Research Partners. But he cautions that “management is not getting carried away as this talk still needs to be turned into actual appropriations.”

John Parker, Boeing’s senior manager for global sales and marketing of tiltrotor programs, says the company is “gearing up” for a new multiyear contract. And there are expectations of foreign sales, following Japan’s decision last year to acquire four Ospreys in a $545 million deal. Japan’s ground self-defense force sees the Osprey as a key asset for humanitarian relief efforts because of its speed and range, Parker tells reporters. “They can get teams in and out very quickly.”

For the defense industry at large, there could be big money in the weaponization effort that Marine officials say is on the horizon, although it has not yet been approved or funded.

The Marine Corps has teamed with the Naval Surface Warfare Center in Dahlgren, Virginia, to investigate the possibilities. Engineers and war planners are weighing the use of forward-firing rockets, missiles, fixed guns, a chin-mounted gun, and a 30mm gun along with gravity drop rockets and guided bombs deployed from the back of the V-22.

“The study that is being conducted will help define the requirements and ultimately inform a Marine Corps decision with regards to armament of the MV-22B Osprey,” says Marine Corps spokeswoman Capt. Sarah Burns.

The first step would be to select a targeting forward-looking infrared sensor. Then the software foundations would have to be upgraded for digital interoperability and the aircraft equipped with survivability equipment to ward off enemy fires. “These initial steps will ensure that the weapon systems which are ultimately selected will be as effective as possible,” Burns says in a statement to National Defense. “Initial integration efforts could start as early as fiscal year 2019,” if the funding is approved.

It is still premature to predict what new missions the Osprey might take on, says Burns. “Assault support will remain the primary mission of the MV-22 Osprey, regardless of the weapons solution selected,” she says. “Both the air and ground mission commanders will have more options with the ability to provide immediate self-defense and collective defense. Depending on the weapons ultimately selected, a future tiltrotor could provide a range of capabilities spanning from self-defense on the lighter side to providing a gunship ‘over watch’ capability on the heavier scale.”

Parker says both the Marine Corps and Air Force Special Operations Command have “asked for more armaments.” The specifics are still on the drawing board and it is not clear when it will become a “program of record,” he says. “The intent is not to turn the V-22 into a close-air-support platform like the Apache or Cobra gunships. It will be an escort, so it needs capability to defend.”

The Marine Corps has for years been pursuing an aerial refueling “roll-on roll-off” kit for the V-22, says Parker. The goal is to have it ready by 2019, so the Osprey can be deployed as a tanker to refuel fixed wing, tiltrotor and rotary wing aircraft.

The Marine Corps “lethality upgrade roadmap” for the V-22 calls for a an aerial refueling system, an air traffic collision and avoidance system, an advanced targeting sensor with electro-optical infrared optics, laser target designator and ranging, infrared marker, and video data link. One of the weapons would be a “medium-range immediate suppression” system.

The roadmap is emphatic about the need to consolidate the more than 70 different hardware and seven software configurations. This mishmash is an overwhelming maintenance burden and keeps many aircraft out of service for too long, Marine officials insist. The plan is to introduce a “common configuration readiness and modernization” plan by 2019, according to the aviation roadmap. “This concept would first bring the entire fleet to a single common configuration and then start improvements leveraging technologies” from other Defense Department aviation programs.

The Naval Air Systems Command in 2015 awarded an estimated $270 million contract to the Raytheon Co. to support V-22 systems, testing and software. Todd Probert, vice president of mission support and modernization at Raytheon, told National Defense in an interview last year that the Osprey illustrates the changing face of military aviation. “The metal, the rotors, the engines, are important. But now more and more of these things are a flying avionics infrastructure.”

The projected arming of the Osprey has drawn the attention of weapons makers such as Lockheed Martin. The company intends to pitch its targeting sensor system if and when the Marine Corps starts soliciting bids. The company developed with internal research funding a modular, 15-inch turret that can be conformed with many types of sensors depending on what the users want, says Paul Lemmo, senior vice president of Lockheed Martin Missiles & Fire Control.

“We intend to compete for the V-22,” Lemmo says in an interview. The 15-inch turret is like a ball that rotates and has multiple windows for the cameras and heat-seeking sensors. Mindful of the military’s maintenance burdens, Lockheed built the system with 10 line-replaceable units. “Today most of these turreted sensors, when they have a failure you're most likely taking the entire sensor off of the platform and shipping it back to the depot for repair. With the modular approach, you identify which of the 10 line-replaceable units has failed and you'll be able to replace it right there in the field.”

Lemmo says military buyers are increasingly demanding high-resolution sensors “to be able to distinguish between a person carrying a gun and a person carrying a shovel. And when you're miles away that's not simple.” For the V-22, the Marines likely will expect that level of fidelity, he says. “You've got to have a high resolution sensor that can really give you the imagery to tell the difference and know what you're firing at.”