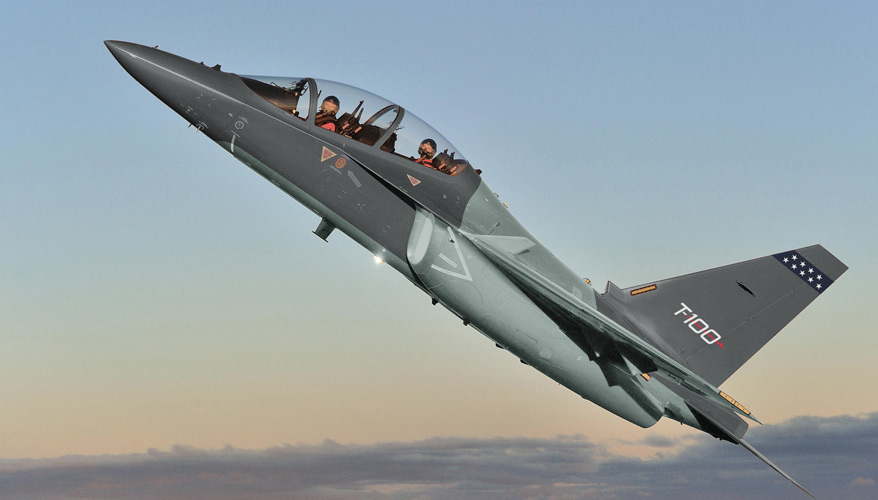 As the competition for the Air Force's next-generation jet trainers moves along, Leonardo executives have announced the company's proposed T-X aircraft will be built and assembled in the United States at the same Alabama field where the legendary World War II Tuskegee airmen trained.

"Building a factory on these grounds will be the fulfillment of a shared goal and … a long and productive partnership," said Leonardo DRS CEO William J. Lynn, prime contractor for the T-100 team at the announcement event at Moton Field in Macon County.

The company would lease a new facility to be built at the historic Moton Field, where it would conduct structural sub-assembly, integration, final assembly and research and testing.

Greg Canfield, secretary of the Alabama Department of Commerce, said in a press release that the state has "a long history of providing critical flight training for military aviators." The Tuskegee Airmen, who were the first African-American military pilots in World War II, trained at Moton Field.

Lynn said he was "struck by the rich history here" of the location.

"We stand here on the shoulders of heroes — the Tuskegee Airmen broke countless barriers as they risked their lives to defend our nation during our most fragile hour," he added.

The contract would create 750 high-wage, full-time jobs over a 10-year ramp-up period starting in 2019, according to a press release. Total investment in the aircraft project's buildings, infrastructure and equipment would exceed $200 million to $250 million.

Leonardo delivered its proposal to the Air Force on March 30, Lynn said. The twin-engine T-100 is currently in use around the world to train pilots to fly next-generation fighter aircraft, the company said. Based on the company's M-346 aircraft, the trainer is used by Italy, Israel, Singapore, the United Arab Emirates and Poland.

"As you see in this environment, to win this kind of competition, you have to be the lowest cost," he added.

The company has teamed up with Arizona-based Honeywell International for the jet engines and Florida-based CAE USA for the training simulators. CAE also partnered with Leonardo on the ground-based training systems for the M-346.

Despite two failed attempts to partner with other contractors to compete for the T-X program — with General Dynamics Corp. and then the Raytheon Co. — Leonardo remains positive on its chances to win the award, Lynn previously told National Defense.

The company is placing its bets that the Air Force will prefer the low cost and low risk of an off-the-shelf aircraft, he said.

Leonardo is one of several teams vying for the $628 million contract to build up to 350 aircraft for the Air Force. The new trainers would replace the 461 aging T-38 aircraft currently in service. Winning the competition could lead to more business opportunities in the global advanced pilot trainer and tactical aircraft markets, analysts have said.

Lockheed Martin and Korea Aerospace Industries' T-50A is also in the competition. Lockheed executives recently said that the aircraft has already completed all of the pre-engineering and manufacturing development test points that the Air Force has required, which was not due until late June.

Lockheed officials have also said the T-50A could be ready to deliver in 2022, ahead of the service's desired initial operating capability date in 2024 and ahead of any clean-sheet design. Two aircraft have been built and undergone testing at the company's Greenville, South Carolina, facilities.

Of the other airframers, a Boeing Co. and Sweden-based Saab team and a Sierra Nevada Corp. and Turkish Aerospace Industries team will offer newly designed aircraft for the competition. Boeing's aircraft will be built at its St. Louis, Missouri, facilities. Aviation Week previously reported that Sierra Nevada and TAI will build their aircraft — dubbed the Freedom Trainer — in Centennial, Colorado, under the subsidiary Freedom Aircraft Ventures, LLC.

Stavatti Aerospace Ltd. of Eagen, Minnesota, in February announced it would be entering the Javelin, a new twin-engine, high-performance military jet trainer, into the advanced pilot training competition. The aircraft is derived from the U.S.-Israeli-designed ATG Javelin Mk-30, which was first proposed a decade ago as a military jet trainer. ATG went bankrupt after failing to find customers for its aircraft, but its designs were acquired by Stavatti. It will be redesigned to fit the Air Force's T-X requirements, according to the company.

Northrop Grumman previously planned a clean-sheet design before it announced in February its withdrawal from T-X consideration.

If Leonardo should prevail in the T-X competition, it would join a thriving aerospace industry in Alabama, which is home to more than 300 companies and organizations related to aircraft and component assembly, raw materials production, engineering, maintenance and repair, as well as flight training, the press release said.

Lynn said the facility would cover nearly 1 million square feet, and its development would bring in construction jobs, in addition to the manufacturing jobs.

"This is going to be an American trainer, built by Americans," he said.

President Donald Trump has placed an emphasis on rebuilding and maintaining the American manufacturing industry in his agenda.

Lynn said the partnership with the city of Tuskegee, the state of Alabama and other stakeholders was "critical to our ability to deliver the proposal today."

Update: This story has been updated with additional comments from Bill Lynn.