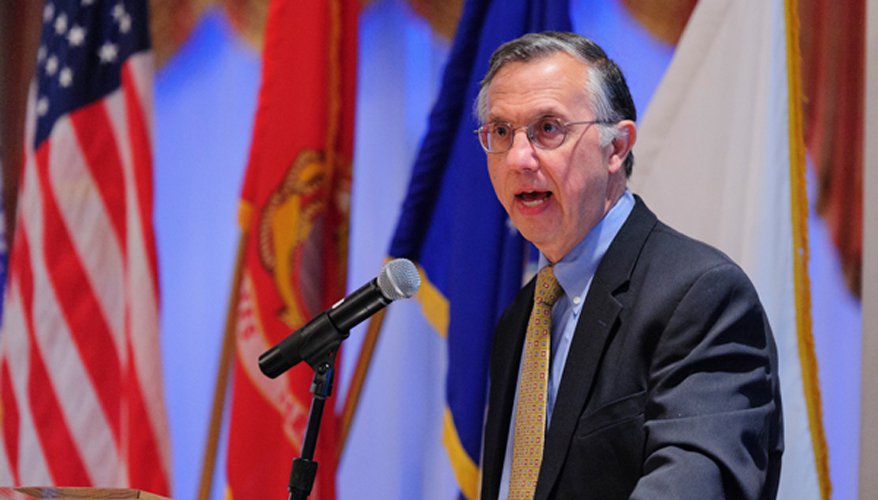 That was in a nutshell the message delivered by senior officials last week at an industry conference in Washington, D.C.

In extensive comments to an audience of executives and investors, Director of Defense Pricing Shay Assad and F-35 Program Executive Officer Lt. Gen. Christopher Bogdan made it clear that they intend to push contractors into a corner.

Defense companies are in the best financial shape in years, but little of that windfall is trickling down into military programs, they complained. The government will seek to regain leverage and press contractors to “bring down the cost of DoD weapon systems,” Assad said at the annual McAleese Credit Suisse defense programs conference.

Government buyers and contract negotiators are encouraged by the Trump administration’s hard-line business approach, Assad said. “When you get somebody who is president of the United States and who understands precisely what you do for a living … This is terrific from my point of view.”

Assad for years has been a thorn in the side of Pentagon contractors as his office oversees pricing negotiations. He suggested the Defense Department is unhappy with the attitude of many defense companies that put profit ahead of the customer’s interest. His priorities going forward: Getting better deals for the Defense Department and looking for ways to increase competition in the market.

The F-35 joint strike fighter, the Pentagon’s largest weapons acquisition, is poised to become a litmus test for the new approach to negotiating with industry. “I am excited about the opportunities,” Assad said.

There is no one specifically to blame for the F-35 being far more expensive than anticipated, said Assad, but he believes that from now on, the Pentagon will look to  manufacturers to deliver cost reductions.

Executives from prime contractor Lockheed Martin have insisted that as soon as production ramps up, the unit price of the aircraft will drop. Assad is skeptical, however. “It’s not as simple as, ‘We increase the rate and that reduces the price,’” he said. “It’s not what this is about. This is about reducing the cost of building the product. We’ll get the inherent benefits of rate as we go along.”

As the Pentagon and Lockheed prepare for the next round of low-rate production contract negotiations, there are concerns that suppliers are not doing everything they could be doing to reduce the cost. “There is a lot of room for improvement at Lockheed Martin and the supply chain,” said Assad. One central question the government will ask is, “What should we be paying for the JSF?” he said. “We need to look deep. … We know what we’re paying. But what does it cost and, more importantly, what should it cost? I think you’ll see a focus on that over the next year.”

The Pentagon will be asking contractors to squeeze savings from their lower-tier suppliers, Assad and Bogdan noted. That will require a complex probe into how each component of the F-35 is made, a process they describe as a “delayering” of the supply chain. Under this approach, a company could consolidate subcontractors that do duplicative work, for instance. For every supplier, there’s additional administrative costs that are passed on and adds to the price of equipment.

Assad said the industry has to step up. “This is no secret to the investor,” he said. “The defense industry writ large in the last five years bought back $85 billion of their own stocks. That's a pretty big number.” The Pentagon expects the industry to pour some of those returns into innovative technology for the military, he added. “We're looking to find ways to make companies make meaningful investments.”

In conversations with leaders from non-defense commercial firms, Assad has been impressed by the “huge investments they make in areas so they can improve their market share. We don’t get a lot of that in this industry. And so we're looking to find ways to reward companies that are stepping up to the plate.”

Assad took a swipe at the F-35 industry team for having suggested that the government co-fund a new round of “affordability” initiatives. In the commercial sector, customers do not give companies money to reduce cost, he said. “We’re looking for a sense of urgency. And frankly we want to reward the companies that do [these investments], and distinguish between those that do and those that don’t.”

He cautioned that he is not proposing that the government “suppress profit margins.” The Pentagon wants companies to be financially successful, he said, but needs the industry to help reduce prices.

In the F-35 program, Lockheed and top subcontractors BAE Systems and Northrop Grumman in 2014 funded a $170 million project called “Blueprint for affordability” to squeeze savings from the manufacturing process. Assad said that effort “has been modestly effective” but more is needed. Of a program that is forecast to produce at nearly 3,000 airplanes, “we only bought 400,” so there are billions of dollars in savings still to be extracted.

“We know companies are all trying to protect the interests of shareholders. And we respect that. We expect them to. But we are trying to protect the interests of the United States taxpayers and war fighters. Sometimes those two interests collide. And I don't want to give any impression that somehow the JSF negotiation process is different than what we're doing every day with other companies.”

The Pentagon intends to drive a hard bargain in other upcoming programs like the B-21 long-range bomber, the T-X trainer aircraft and the next-generation intercontinental ballistic missile, said Assad. “We should expect companies to be willing to invest in cost reduction. I’m not talking about buying in. I’m talking strictly making investments to reduce cost.”

Assad said he does not buy the industry’s argument that they are hesitant to invest because defense funding is unstable. And he rebuffed industry assertions that defense systems are expensive because red tape adds cost. By some estimates, defense-unique procurement regulations account for 20 to 30 percent of the cost of a system. “We hear a lot about the cost of doing business with DoD, a lot of angst and arm waving,” but Assad said he has yet to see reliable data that proves that point.

“Every time we go through these exercises nobody shows us the money.” In one case, he heard from a contractor who claimed the “earned value management” accounting system that DoD requires adds too much cost. When he asked for data, he said, the company came back 18 months later and the answer was that two additional people were needed to run EVM. “It is the cost of doing business, there’s nothing there, it’s all hypothetical discussion and no real data.”

Bogdan said the F-35 program is progressing and he is satisfied for the most part, except for the price. He recently concluded that there is more room for savings and lowered the bar — from an $85 million per airplane price tag by 2019 to $80 million by 2020.

“We have over 200 operational airplanes in the field. But the elephant in the room is affordability.” The $80 million goal is for an F-35A model, including the engine and contractor fee. said Bogdan. “That’s the target.”

Bogdan’s office will be negotiating F-35 production lot 11 this summer with Lockheed Martin. “What I see is a lot more has to be done to get cost out of the airplane.” Bigger production runs and multiyear contracts will help, but he wants the industry to take more aggressive actions now.

With a supplier base of 1,300 vendors, “we have to figure out how to delayer the supply chain. There is a lot to be gained in delayering 1,300 suppliers. I don’t disagree with Mr. Assad that there are things that industry could be doing today to drive cost out of this airplane that they ought to be doing themselves. If not, the government is going to help them do it.”

The message from Assad and others is that “we have to roll up our sleeves,” said Bogdan. “Just because I know what it costs doesn’t mean I should be satisfied.”

Like Assad, he seemed unimpressed by the Blueprint for Affordability initiative. “It was OK, just OK,” said Bogdan. “We took the low-hanging fruit. Industry invested $170 million in cost reduction initiatives. In my mind they didn’t invest in anything. It was money they didn’t have in their pocket for one to two years. They get paid back and get a premium. Savings were OK, but not as much as we thought we could have.”

The industry team has proposed a second phase of the Blueprint for Affordability. Initially the companies asked DoD to pitch in $100 million but the JPO said no. “As we move forward, we are looking for deeper savings, getting below the lower-tier suppliers,” said Bogdan. “I have to figure out how to energize the supply chain from the ground up, not from the top down.”

Lockheed Martin’s F-35 manager Jeff Babione, told reporters last week at a news conference that the company was taking significant actions to bring down costs. “Since the first LRIP we have reduced the price by 62 percent,” he said. “We are on a trajectory to get to $85 million in 2019. Between lots 11 and 14 the production will accelerate, which is essential to cost reduction, he said. “This is the opportunity to use economies of scale, apply additional pressure to reduce cost. This is extremely important, so we can procure parts at more cost effective rates. If we don’t have that ramp up the cost flattens.”

Is the $80 million goal achievable? “It’s all within the art of the possible,” said Babione. But he stressed that it’s mostly predicated on the number of airplanes ordered. “This allows us to plan better. I can buy 300 airplanes worth of stuff upfront. It’s like going to Costco. You get economies of scale.”

The details of the second phase of the Blueprint for Affordability are still being hashed out, said Babione. “We have a lot of great ideas. It will be about the same level of investment, $170 million, and we’ll be able to get billions out of the program.”