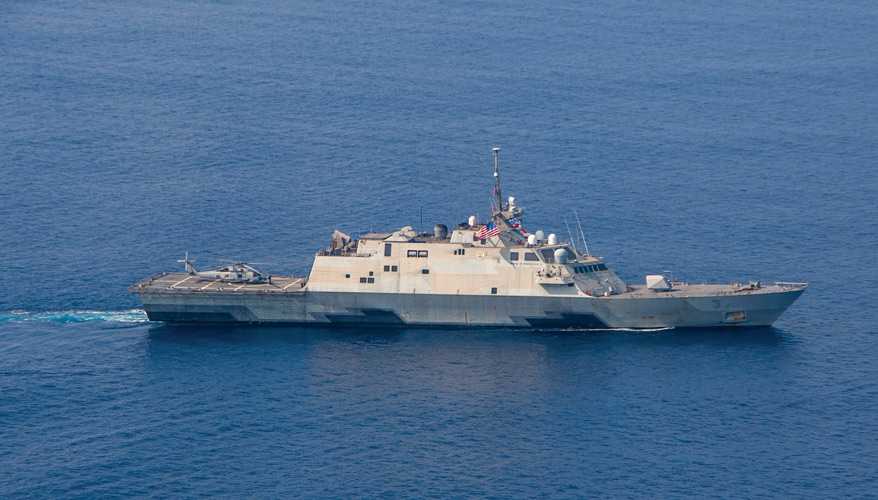 As the Navy reaches major milestones in the littoral combat ship program, the future of the embattled vessel remains uncertain.

The program — which includes two variants built by Lockheed Martin and Austal USA — is one of the Navy’s most controversial programs. In recent years, critics have pointed out the ship’s lack of survivability in warfare and limited capabilities. Pentagon leaders have slashed planned buys and restructured the program by opting to build upgraded frigates based on an LCS hull.

However, with President Donald Trump in the Oval Office, it is possible that his administration could restructure the program once again, said Ronald O’Rourke, a naval analyst for the Congressional Research Service.

“With the transition to the Trump administration, DoD leaders have an opportunity to decide whether they want to review the program again in light of the new administration’s defense priorities, and if so, whether to leave the program unchanged or change it in some way,” he told National Defense in an email.

This change could manifest itself in a variety of ways, he noted. The administration could change the procurement quantity or the annual procurement rate.

“The Trump administration also has the option of considering whether to pursue another idea that has been mentioned from time to time in recent years, which would be to develop a completely new frigate design and put that design into production some number of years from now,” he said.

“With various potential options for maintaining or somehow changing the LCS program, and for possibly developing and procuring a completely new frigate design, there are many potential paths,” he said.

Bryan Clark, a naval analyst at the Center for Strategic and Budgetary Assessments, a Washington, D.C.-based think tank, said the Navy could start pursuing this vessel in the 2020 timeframe.

Despite an uncertain future, naval leaders said the littoral combat ship and the LCS-based frigate programs are reaching a number of major milestones at a recent industry conference hosted by the Surface Navy Association.

The sea service is preparing to release a draft request for proposals for the ship by spring, said Capt. Dan Brintzinghoffer, program manager for frigates at the littoral combat ship program executive office.

“We’ll put a draft RFP on the street … in the next two months,” he said in early January. “Then the RFP would be at the end of the year.”

The Navy is planning to purchase 40 littoral combat ships and the frigate. The total purchase reflects a reduction of 12 ships that former Secretary of Defense Ashton Carter ordered in 2015.

The program office is working to mature the design of the frigates before the RFP is released, said Rear Adm. John Neagley, program executive officer at PEO LCS.

“We’re working through those design turns to make sure that we have a good, mature design before we issue that RFP and before we … go into contract,” he said. The team is “working that very, very closely.”

The Navy plans to down select to a single design by fiscal year 2018, Brintzinghoffer said. It is closely working with the prime contractors of the two littoral combat ships.

The vessel will also be outfitted with a more advanced command, control, communications, computers and intelligence suite than the LCS, Brintzinghoffer said.

Because the frigate will be constructed to accommodate more missions than the LCS, it will be heavier, he said. That will affect its speed — one of the hallmarks of the littoral combat ship program.

“A heavier ship is not going to go 40 knots,” Brintzinghoffer said. The frigate will be able to reach speeds above 30 knots, he added.

Buying the vessels in blocks has helped keep the program stable and has driven cost down, he said. It has been “an effective strategy for us and it has brought a lot of stability into that shipbuilding program,” he said. “It allowed our shipyard partners to invest in those shipyards, get the infrastructure right and help us deliver ships” two times a year.

However, according to a recent Government Accountability Office report, costs for the program have swelled. The LCS was initially expected to cost $220 million each, but the price tag has risen to $478 million. Additionally, the projected cost of the mission packages has increased by $3.5 billion.

Originally, the LCS was touted as a vessel that would host a small crew, but that number, too, has increased from 50 to 60 sailors to now 70, the report found.

Sen. John McCain, R-Ariz., chairman of the Senate Armed Services Committee, said in a recent white paper that the Pentagon should “curtail” the procurement of the littoral combat ship.

It should buy “only the minimum number of additional ships necessary to serve as a bridge for the industrial base to compete for the next small surface combatant, which could begin procurement in 2022 or sooner,” he said. “This could accelerate the next small surface combatant by seven years and result in procurement of two additional small combatants by 2030 compared to the current plan.”

The Navy’s idea to field a new LCS-based frigate is unwise, he noted.

“According to the Government Accountability Office, the Navy’s proposal to continue the LCS program with minor modifications … was largely the result of cost and schedule constraints, and still would be unable to meet the Navy’s capability requirements,” he said. “An alternative plan could allow for a fuller competition among modified existing U.S. and foreign designs.”

The next small surface combatant must have more capability and survivability than the LCS, including the ability to strike enemy surface ships at over-the-horizon ranges with multiple salvos; defend noncombatant ships from air and missile threats; conduct long-duration escort or patrol missions without frequent refueling; and survive in contested environments, McCain said.

The LCS falls short in each of these areas, he said. “We must get beyond it as soon as possible,” he added.

Clark, of the Center for Strategic and Budgetary Assessments, said the LCS has few friends in Congress.

Going forward, “the challenge is going to be [that] there’s not … a lot of support for the Navy to build LCS-based ships. There’s nobody in Congress that is interested in continuing to pursue those,” he said. “What they’re willing to entertain is the idea of building some more LCSs as a stopgap or a bridge to building a regular frigate.”

Even within the Navy there is trepidation about procuring upgraded LCS-based frigates, he said.

“The impression I get is that they’ve got this frigate RFP that’s coming out but the challenge they’re facing is they cannot get the kinds of capabilities the Navy wants in the frigate into the LCS hull,” he said. “The Navy is going to have to reconcile itself to that and either build an LCS-based frigate that doesn’t deliver the air defense in particular that they want it to deliver, or they’re going to have to come up with a plan that eventually gets them to a frigate that could provide that air defense capability.”

Modifying the LCS will likely be cost prohibitive, he said. The Navy may be realizing that they should “dial back” on the RFP and push for a traditional frigate, he added.

“I just see a lot of movement away from LCS as a long-term solution,” he said. “I see a lot of interest in building some more of them until the end of this decade and then transitioning into a guided-missile frigate that is more like what we had with the Oliver Hazard Perry-class.”

Despite controversy surrounding the vessel, it is unlikely that it’s the next weapon program Trump will tweet about, as he has with the F-35 and the Air Force One replacement, Clark said.

“It doesn’t have the kind of cost or performance problems that these other programs have had,” he said. “It doesn’t seem like it’s going to rise to that level.”

However, analysts have said that if Trump were to start criticizing the LCS in a public forum such as Twitter, that could propel the Pentagon to conduct a special DoD assessment of the program, if one has not already been launched at the time, or accelerate such a review, if one were already underway.

Experts have also suggested that Trump’s close relationship with newly confirmed Attorney General Jeff Sessions, a former Republican senator from Alabama, may shield the program. Austal USA, the builder of the Independence-variant of the LCS, is based in Mobile, Alabama. Lockheed Martin builds the Freedom-variant in Marinette, Wisconsin.