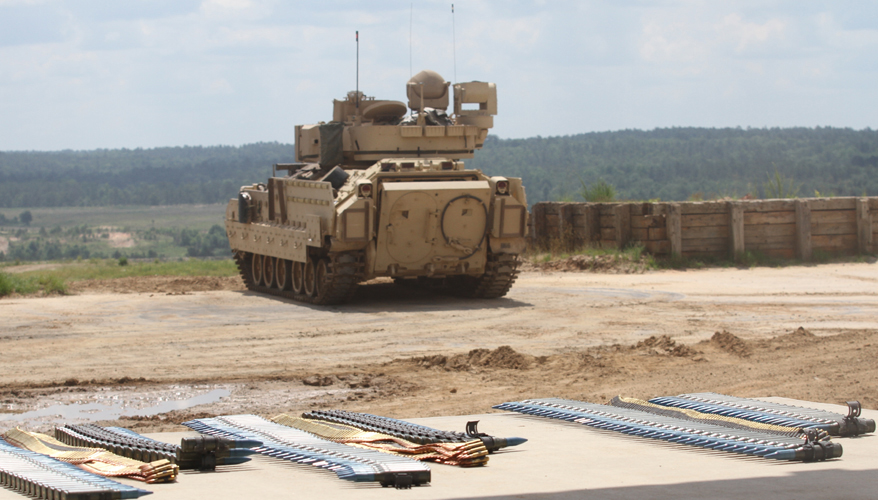 HUNTSVILLE, Ala. -- The Army plans to build prototypes of next-generation combat vehicles within about five years, according to the director of mounted requirements at the service’s Maneuver Center of Excellence.

Many questions remain as to what the platform, also known as NGCV, would look like and how it would fit in combat formations.

It could end up being “a family of vehicles,” he told members of industry and reporters March 14 at the Association of the United States Army’s Global Force Symposium.

Later this year the service will establish a NGCV integrated concept development team to flesh out potential options, he said.

“That will begin in earnest the … assessments of technology” in terms of readiness levels and manufacturability, and “begin to chart the course” for the project, he said.

Technologies of interest include directed energy and energetics; power generation and storage; vehicle protection and protective suites; and robotics and autonomous systems.

The need for offensive and defensive cyber and electronic warfare capabilities is also on the minds of Army planners as they look toward the future, he said.

A near term objective is the production of at least two technology demonstrators to further assess what’s available and inform requirements.

The Army hopes to have them completed no later than fiscal year 2022.

“We do have sufficient funding beginning next year to at least do 80 percent” of what would be required, he said. But “I think we need more money … to get what we need to get out of those tech demonstrators in terms of assessing technology and informing the requirements,” he added.

Army Chief of Staff Gen. Mark Milley is “a big proponent” of this type of prototyping, Nuckols noted. “I think we’re going to be OK” when it comes to funding, he said.

Fiscal year 2022 is expected to be a key decision point for the project.

“We anticipate FY22 being when we decide whether or not we want to make NGCV a program of record and move forward, or take a pause [and] wait for the critical mass of technologies to get us where we need to go in order to make that decision to invest that huge sum of money into a new program,” he said.

Alternatively, a decision could be made at that time to modernize the Abrams and the Bradley rather than move forward with the next-generation combat vehicle, he noted.

“We’re really looking at everything and trying to see where the sweet spot is in terms of waiting for something to develop, and not waiting too long that we’re left with 50-year-old Bradleys and 50-year-old Abrams that we nurse along for that entire time,” Nuckols said. “It’s a balancing act.”

The Army aims to field a next-generation combat vehicle by the early 2030s, although it could potentially come sooner, he said.

“We could go faster once the technology demonstrators are completed and we assess the technologies and we make some refinements to our requirements,” he said. “But the anticipated first unit equip date is based on our assessment of our current acquisition strategy and the timelines of bureaucracies associated with that.”

Nuckols said decisions about requirements and the role of NGCV would be driven by lessons learned from recent conflicts in Ukraine, Syria, Iraq and elsewhere; expectations about the future operating environment; current and future enemy capabilities; Army warfighting concepts; and “fiscal realities.”

The service will also look to overseas partners, he noted.

“When we look at things like materiel solutions for capabilities, we’re looking across the globe and taking the best of breed from many of our allies’ capabilities and technologies,” he said.

The Army is also drawing lessons from the successes and failures of past programs such as Future Combat Systems, which was canceled in 2009.

“FCS was … waiting forever for those technologies to finally come down the chimney with Santa Claus,” he said. “We’re not taking that approach. We have some aspirational operational capabilities that we’d like to have but we’re going into this with our eyes open.”

“We’ll make decisions along the way on whether or not we’ll even continue with NGCV based on … technologies available” and their readiness levels and manufacturability, he added.

The project could be abandoned later on if the Army determines that “we’re better off simply integrating those technologies into our current platforms,” he said.

Re: Army Will Start Experimenting With New Combat Vehicle Concepts

I think it would behoove the US Army to first start with the Mobile Protected Firepower (MPF) light tank as the next prototype, two of which already exist under the M8 AGS by BAE and the “Griffin” light tank with Abrams turret by GDLS. The US Army’s TRADOC has spoken with industry as to what it desires for the next combat vehicles.

I think that the US Army is running into the problem of not fielding anything new. SOMETHING new is another vehicle and weapon for the enemy to worry about ("quantity has a quality") and adding different “tools into the toolbox” and different “arrows into the quiver.” By canceling this and that armored combat programs, the issues the US Army have still remain unresolved and so it's back to the same 1980 and 1990s “Legacy” inventory of M1s, M2s, M3s, M109s, MLRS, M1117s, Strykers, and M113s as your staple crop of AFVs to accomplish the armored combat missions of the 2020s.

By just fielding something new and more capable would add a new player with new capabilities to the playbook...like the MPF, Multimission Launcher, Stryker 30mm, recon JLTV 30mm, Polaris MRZRs, AMPVs, or a CKEM launching vehicle. The Russians, Chinese, and NATO have a lot of vehicles in their stable (take a look at the Defense Expos), more so than the US Army, and each one contributes something to the scheme of threat envelopes, firepower, and AFV capabilities. And the ironic thing is that these armies seem to be able to manage them all within their supply chain. The US Army lacks armored “game changers” for the longest time outside of the upcoming 30mm JLTV, Multimission Launcher, and 30mm Stryker with RWS turret. The AMPV is just a replacement for the poorly armored and mobile M113s…the AMPV offers no new firepower.

Another concept would be to add new turrets and weapons systems. The HMMWV with MK-19, M2HB, and TOW is the US Army’s standard light weapons carrier. The Mk-47 Striker grenade launcher, a light minigun, a Javelin or lighter ATGM launcher, or better heavy weapons systems would add to the lethality of the JLTV and HMMWV. I also believe that the US Army (and USMC) should replace the M1117 (and AAV7P) turret with better weapons and at least make the turret stabilized. The MK-19 and M2HB combo are outdated in today’s time, especially on a non-stabilized turret using iron sights to aim and fire. There’s the 90mm Direct Fire vehicle and newer remote turrets with smoke grenade launchers and better digital fire controls that eliminate the need for a manned non-stabilized armored turret.