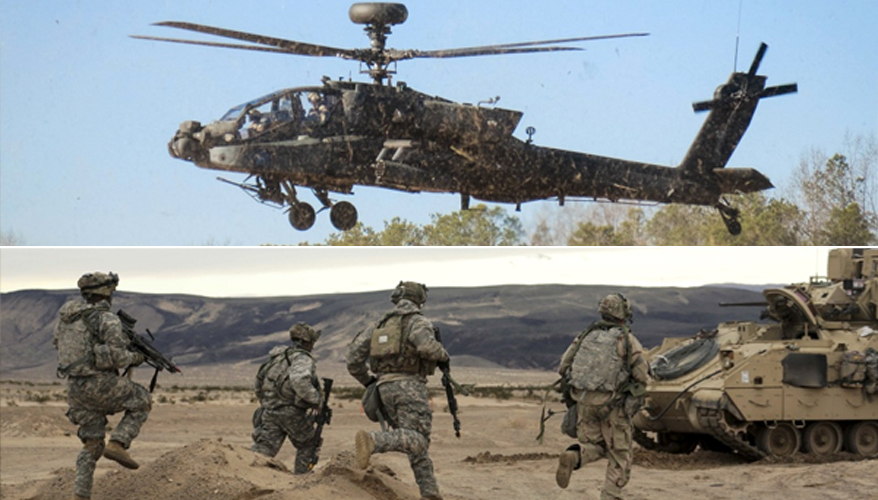 Cutting-edge weapons projects that the defense industry has awaited for years — the development of a new tank, driverless combat vehicles or ultramodern high-speed helicopters — are still being talked about, but in the abstract, as systems that the Army would like to acquire a decade from now or longer.

If the Trump administration delivers on its promise to increase defense spending above the levels projected during the Obama years, the Army’s immediate priority will be to add soldiers to the ranks, provide adequate training and equipment to combat units. Efforts to improve the Army’s combat readiness started ramping up about three years ago, but officials warn that the force is still digging out of a deep hole.

So even with an anticipated new influx of money, the next generation of weapon systems will be pushed further into the future, analysts and military officials caution.

Senior Army leaders — notably Lt. Gen. HR McMaster, who is now Trump’s national security adviser — have called on the military to accelerate development of next-generation systems and to take technological leaps to ensure it is not overmatched in future wars. That type of aggressive modernization is not in the cards, at least in the next five years, as the Army will have to spend most of its equipment dollars on systems it already has in production.

“There is no money to invest in long-range projects,” says Hamilton Cook, senior market analyst at the consulting firm Avascent, in Washington, D.C. “The president wants to grow the force by 90,000 troops. That eats up a lot of operational and equipment funding.”

The question of whether a bigger but less technologically advanced force is preferable to a smaller one supported by sophisticated cutting-edge systems has been a “battle for the soul of the Army,” says Cook. “The Army needs headroom to invest in next generation technology and in a younger force with more modern platforms,” he says. “The increase of force size directed by Trump is politically popular and expedient, but the Army could be penalized by eliminating the flexibility to invest.”

The defense industry still will benefit from the Army’s readiness push. Armored vehicle assembly lines and helicopter manufacturing plants may be running at full capacity just to keep up with basic equipment needs for a growing Army, says retired Army Lt. Gen. Jeff Sorenson, a partner at the consulting firm A.T. Kearney.

“Readiness is not just training. It’s spares, maintenance and remanufacturing of aging platforms,” he says. “From that standpoint, it’s hard to say industry will suffer. I think there’ll be something for everybody. We’re not going to buy a hundred new tanks. I don’t think they‘re there. The Army now needs equipment to get to a state of readiness.”

The industry likes to have “clarity” about future investments, but the service is now focused on the near term, especially in the absence of senior political appointees who have the full backing of the Trump administration, Sorenson says. The military adviser to the assistant secretary of the Army for acquisition, logistics and technology Lt. Gen. Michael Williamson is reportedly retiring and most senior leadership posts at the Defense Department remain unfilled.

A new forecast of defense spending by Avascent projects the Pentagon will set aside $11 billion in fiscal year 2018 for “ground systems.” In the Army, “most requirements for a larger force will be met by resetting existing vehicles, rather than new production. Avascent does not expect rapid initiation of the ‘future fighting vehicle’ program.”

For the defense industrial base and for manufacturing jobs in the Midwest, this is good news, says Avascent Managing Director James Tinsley. There was talk for years about closing down the Army’s tank assembly plant in Lima, Ohio. “Now plenty of money is going to flow into those facilities.”

Army brigades overseas are especially strained, with two maneuver battalions instead of three. “There are capacity problems worsened by a decline in training rotations through major combat training centers,” says Tinsley.

“The Army has recently started to recover,” he says, but the readiness troubles are real, which is why “we have been extremely bullish on O&M [operations and maintenance] funding,” he says. “It has now become a concrete policy statement from the White House.”

Regardless of pressing circumstances, the Army has options to modernize the fleet if it moved to acquire weapon systems from the open market, Tinsley says. Delaying modernization to focus on readiness is not a binary choice. “We are not making incremental changes or leveraging R&D investments” made by other countries, for instance.

Broadly speaking, the Army has been reluctant to adopt someone else’s “slightly more advanced vehicle, and instead has pursued ‘game changing vehicle technology’ to drive us into a new future that no other country can afford,” Tinsley says. “Typically we can’t afford that either, and we end up with failed development programs.”

This is a serious obstacle to Army modernization that can’t be blamed on funding shortfalls alone. “Caution from failed programs is reflected in the slow procurement of JLTV, AMPV and Paladin PIM,” he says. The joint light tactical vehicle, the armored multipurpose vehicle and the improved Paladin howitzer are programs that have been started but appear to have been moved down the totem pole.

“Whether that’s the right move or bad, it’s a natural cultural reaction from being yelled at a lot for past procurement failures,” Tinsley says.

The Marine Corps, which also has seen its share of costly development and procurement flops, has been more receptive to the possibility of buying vehicles that were developed overseas and might meet most of its needs. In its amphibious combat vehicle program, the Marines are “leveraging investments made by the Singaporean and Italian governments,” Tinsley says. This is a cautionary tale for the Army, he adds. If the Army had the money it wasted on failed vehicle programs, it could buy an entirely modern fleet. “They would be up-gunned and up-armored,” he says. “The lesson is not to neglect the current fleet for a future objective.”

Some factions within the Pentagon have been fretting about the Russian and Chinese armies catching up to the United States, and fear that U.S. ground forces over time will become more vulnerable. “They worry the Army will get more money but will not be able to push it into advanced technology,” says Tinsley.

The conundrum is especially evident in Army aviation. For years, funding was “very tight,” says Cook. Army leaders have had to “game the system, hoping that Congress would fund aviation programs through unfunded requirements.”

A readiness budget boost will help the Army stabilize the Black Hawk, Chinook and Apache production lines. “The biggest winner is Apache,” Cook says. At one point, the Army was close to taking Apache attack helicopters away from the National Guard and cutting Apache units in Korea, he says. That prospect is now less likely.

One of the Army’s highest priorities is the “improved turbine engine program” known as ITEP to retrofit its existing helicopters. A new fleet of more advanced aircraft — under an umbrella project called “future vertical lift” — will not materialize until after 2030.

“This is a problem for the Army across the board,” Tinsley says. “It’s a contradiction that they have programs scheduled for the 2030s and a lot of maintenance programs. They are trying to run out all the production lines to clear the funding space. You have to run out the Apache to clear funding for ITEP in mid 2020s. By the mid 2030s, they will need to balance the engine, a new helicopter procurement, while keeping the existing aviation industrial base happy,” he adds. “That’s going to be an extreme juggling act.”

In his testimony to the readiness subcommittee, Anderson, the Army’s vice chief of staff, put it bluntly: “Our Army requires modernized equipment and sufficient, trained manpower to win decisively. Today, we risk being outmanned, outranged, outgunned and outdated.” Combat brigades need long-range precision fires, air and missile defense, armored vehicles and helicopters, he says. “In addition, new and emerging capabilities must be developed and acquired.”

Maj. Gen. Walter E. Piatt, director of operations of the Army Rapid Capabilities Office, worries that the service lacks a clear roadmap for when and how to acquire the next generation of technologies.

The circumstances have made it difficult for weapons developers like Maj. Gen. David G. Bassett, Army program executive officer for ground combat systems.

“I have overseen modernization during a time of historically low level of investment,” he says at the Capitol Hill event. Paradoxically, “in an environment in which technology proliferates, the level of complexity and the cost of land power has never been higher,” he says. The problem for the Army is an “appetite for cost and complexity.”

Because ground warfare has become increasingly lethal, “land power is no longer going to be a cheap investment relative to sea and air,” says Bassett. Sensors, active protection systems, ground-penetrating radar are necessities that add to the cost of equipping combat brigades. “The complexity and cost of our formations, even if you buy really well, is significantly higher,” he says. “Coming out of this period, we reduced investment to defend force structure and readiness. I can tell you right now the level of investment in our portfolio is unacceptably low.”

At the current pace it will take decades to turn the Army into a 21st century force, he says. “Today we modernize one brigade of Strykers every two years. One armored brigade every two years for the Abrams and Bradleys. It will take 30 years to upgrade all our formations.”

One of Bassett’s most successful programs, the upgrade of the Stryker brigades, proves that “if we are able to align requirements, technology, dollars and an acquisition strategy,” things can move quickly. “We failed in the past because one of those four things was mismatched with the other three,” he says. “Alignment is so critical.”

He recognizes the Army will have to become more open-minded about buying systems that are already available. “The only way to get rapid is to start with pieces that are more mature and ready. “You see that coming into play in rapid procurements like off-the-shelf active protection and mobile-protected firepower,” he says. “We cannot do a full new vehicle and get all those things ready to go in a short period of time.”

There is a whole world of technology that other countries have funded and would be available to the U.S. Army, he says. “We just have different levels of risk tolerance, willingness to accept shortcomings and willingness to make tradeoffs,” says Bassett. “The lighter combat vehicles you see around the world are not made of any different materials than what we have. They offer less protection, less space available. Those are tradeoffs that nations make.”

In the U.S. Army, “we lost generations of modernization waiting on technology that was not mature. I have no desire to develop the next UCV ‘unaffordable combat vehicle’ and things that we can’t produce in volume.”

Efforts to equip existing tanks and Bradley fighting vehicles with active protection systems will be an indicator of how much the Army is willing to compromise to get technology into the fleet faster. Active protection — a network of sensors, radar, fire control systems and interceptors — is deployed in vehicles to locate and knock down incoming missiles and rockets.

These systems have existed for decades and are deployed successfully by countries like Israel and Poland, but the Army has not been a fan, until now. “We’ll accept some shortcomings,” says Bassett. These systems do pose risks to soldiers outside the vehicle, but that has to be weighed against the protection it provides to soldiers inside the vehicle. “We’re no longer in an ivory tower looking for the perfect requirement.”