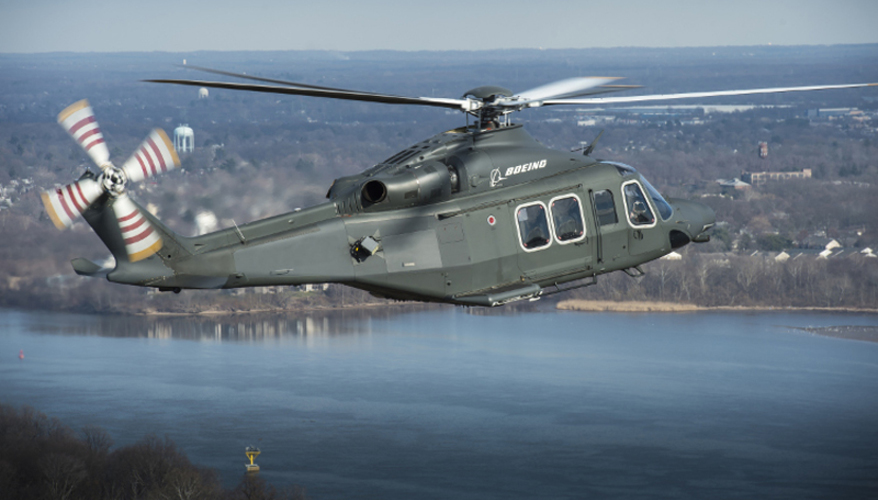 The aircraft is based on Leonardo's AW139 medium-sized twin-engine helicopter, which is used by several non-U.S. air forces including Algeria, Italy and Qatar, as well as U.S. government organizations including the Maryland State Police and the United States Border Patrol.

"From our standpoint, we think we've got the right helicopter for the Air Force," Boeing Vertical Lift Director Rick Lemaster told reporters Feb. 25 at Dulles International Airport, in Virginia, where an MH-139 test helicopter, painted black and marked with Boeing decals, was on display.

Boeing will serve as the prime contractor, and is responsible for procuring military unique capabilities to be added to the aircraft, Lemaster said. It will also handle logistics support and standing up support for equipment, test hubs and flight line maintenance, he said.

The helicopter's footprint parallels that of the UH-1N while providing 30 percent more cabin volume for improved capacity and capability, according to Boeing. It features an integrated avionics system with advanced flight deck functionality and improved situational awareness.

Lemaster said the reconfigurable interior can be adapted to troop and equipment needs.

When Boeing looked at the requirements set for the UH-1N replacement, it saw "a good synergy" between the requested aircraft and Leonardo's AW139, Lemaster said.

"From a Boeing perspective, we don't really have an aircraft in that class," he said.

The AW139 has been produced for about 10 years, and currently about 250 aircraft are being built at Leonardo's Philadelphia plant, said Lauren Slepian, a company spokeswoman.

The Air Force released the first draft RFP in December for the program, which aims to acquire up to 84 new off-the-shelf helicopters.

The service recently announced that a second draft RFP is planned for release in April, after receiving new feedback from industry.

"We're convinced we have a way to meet all of the Air Force's requirements," Lemaster told reporters. The AW139 has over 90 Federal Aviation Administration certified kits for different capabilities, such as hoists or sensors, "that we easily can just add to the aircraft configuration," he said.

The demonstrated aircraft had sliding windows that could allow for door gunners, but the model that Boeing and Leonardo plans to offer to the Air Force will have an externally mounted weapon, Lemaster said.

Jim Kruger, a Leonardo test pilot who trained on Hueys, said, "it's almost an unfair comparison" between the UH-1N and the Leonardo aircraft.

"When you're talking responsiveness, and maneuverability and then speed and really every aspect of it, it's really a different world," he said.

Lemaster said the final RFP is expected by summer 2017, with a contract award in 2018. Deliveries would start in 2019, according to the Air Force.


Boeing and Leonardo are entering a competition that analysts say seems all but lined up in favor of Sikorsky's UH-60 Black Hawk medium-lift utility helicopter.

Airbus, Bell Helicopter and AgustaWestland — which merged with Leonardo in 2016 — pushed back when the Air Force previously tried to use the Economy Act of 1932 as a justification for buying Black Hawks for the nuclear security mission under an existing Army contract with Sikorsky. Lockheed Martin acquired Sikorsky in late 2015.

Now, the Air Force appears to be defining the program's requirements to get "basically the same results," said Richard Aboulafia, vice president of analysis for the Teal Group.

"It's very tough to have an apples-to-apples competition if you're base-lining a Black Hawk," he said. From a size and capability perspective, and factoring in the logistics and training commonality with the Army's UH-60 fleet, "that goes a long way toward erasing any cost savings you would get from a smaller machine," he said.

Sikorsky and Bell confirmed their intent to compete for the Huey replacement with the HH-60U Black Hawk and the UH-1Y utility helicopter, respectively.

The HH-60U shares 85 percent commonality with the Air Force's incoming fleet of HH-60W combat-rescue helicopters, according to Sikorsky.

Much of the decision will come down to the size and capacity of the aircraft and power requirements, analysts said.

The requirements seem to revolve around the number of combat-equipped troops the helicopter has to carry, said Douglas Royce, senior aircraft analyst with Forecast International, a Newtown, Connecticut-based consulting firm. The Air Force has currently set the weight requirement at a minimum of nine combat troops with equipment.

"Right now the question is: Is the Air Force going to write the requirements to favor a larger, more powerful helicopter, or is it going to accept a smaller commercial helicopter that can handle the job?" he said.

The service has kept the lid on many of the program's requirements so far, and Boeing representatives remained tightlipped on what had been included in the draft RFP.

Lemaster told reporters "the expectation is that [the UH-1N replacement] will do all of those primary missions that were laid out as well as a list of auxiliary missions."

If the procurement were split up, as companies like Airbus have advocated, the Air Force could select one type of aircraft for nuclear security and possibly a different one for the VIP transport mission in the national capital region, for which it could choose a less expensive helicopter.

The more stringent military requirements for nuclear security would play in favor of the Black Hawk, analysts have said. But with a price tag of $25 million to $30 million per aircraft, competitors have argued the Air Force would be hard pressed to justify such a big-ticket helicopter for routine VIP shuttling. That mission could be satisfied with less militarized commercial aircraft at half that price.

Lemaster said the MH-139's "lower operating costs, increased reliability [and] the improved maintainability, all will translate into savings for the Air Force over $1 billion across a 30-year lifecycle," compared to what Boeing believes its competitors will offer.

Airbus continues to advocate for a two-aircraft solution, according to spokesman James Darcy. "From a cost savings standpoint, there’s a strong argument for breaking up those missions," he said.

Whether Airbus decides to compete for the program depends on what comes out in the RFP, he added. "From what we saw in the draft RFP there was no competitive business case for us."

The competition will be cutthroat, said Aboulafia, noting that 84 helicopters "is a lot."

The stakes are particularly high for Leonardo as it tries to solidify its position in the market. After its partnership with Raytheon to compete for the Air Force's T-X advanced pilot trainer jet program dissolved early this year, Leonardo announced it would compete with its T-100 integrated training system, leveraging its U.S. company Leonardo DRS as the prime contractor.

Leonardo also competed as AgustaWestland for the Marine One presidential helicopter replacement program, and its VH-71 Kestrel rotorcraft was being acquired by the Marine Corps before the procurement was abruptly canceled following the withdrawal of funding. After the program was restarted in 2010, Sikorsky's S-92 was eventually chosen as the Marine One replacement.

The Huey replacement could be one of Leonardo's last chances to secure a U.S. airframe program in the near future, Aboulafia said.

"How many more airframe competitions are out there in DoD land for the next five years?" he asked. "There's not a lot you can go after."

Boeing and Leonardo have a "firm working relationship" on the MH-139, Lemaster said. The two companies have worked together previously, on the United Kingdom variant of the AH-64 Apache attack helicopter and on the Italian Army's CH-47 Chinook fleet.

Sandra I. Erwin contributed to this report.