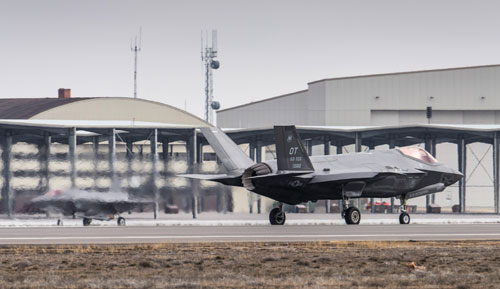 The $400 billion program is the most expensive acquisition project in Pentagon history. The Defense Department plans to spend about $56 billion on the aircraft over the next five years.

The project has experienced significant cost overruns, schedule delays and technical problems, and Trump took aim at it before he even came into office.

“The F-35 program and cost is out of control. Billions of dollars can and will be saved on military (and other) purchases after January 20th,” he tweeted in December.

He has asked Boeing to “price-out a comparable F-18 Super Hornet” as a potential alternative to the F-35, he said in a subsequent tweet.

Mackenzie Eaglen, a defense budget analyst at the American Enterprise Institute, has briefed Trump’s policy advisers on several occasions. They are inclined to “tear open this program and take it apart” and look at whether major changes need to be made to the number of planes procured or other aspects of the project, she said.

“They really believe it’s time to burn the Pentagon” metaphorically speaking, she said. “That’s going to have a heavy emphasis on acquisition of weapons in particular.”

“Lockheed Martin and its industry partners understand the importance of affordability” for the joint strike fighter program, Jeff Babione, the company’s executive vice president and general manager of the F-35, said during an aircraft delivery ceremony in Israel in December.

Lockheed has been trying to bring costs down, he emphasized.

“Since the beginning, we’ve invested hundreds of millions of dollars to reduce the price of the airplane more than 60 percent” relative to the original low-rate initial production bill, he said.

“It’s a great value and we look forward to any questions [Trump] may have,” Babione said.

When asked about Trump’s comments, Air Force Lt. Gen. Christopher Bogdan, the head of the F-35 joint program office, said he understands why there is a perception that the program is out of control, noting that from 2001 to 2011 it experienced a six-year delay in development and $13.5 billion in cost overruns.

“This is a vastly different program” now, he told reporters in December. “I don’t think the program cost-wise is out of control nor do I think it’s out of control schedule-wise.”

The aircraft is vital for the United States and its allies to maintain air dominance for the next 50 years, he said. But he and his JPO colleagues are not “salesmen” for the fighter jet, he added.

“I don’t have a strategy with the industry to go … try and save this program,” he said. “Our job is going to be to give the administration the good, the bad and the ugly about this program and let them make their own decisions.”

If the new president and his team try to significantly reduce the F-35 program, they would likely face resistance. With production spread out across more than 40 states, the joint strike fighter has the backing of many members of Congress who have jobs in their districts tied to the aircraft.

In addition, Lockheed would be expected to fight hard against any efforts to pare down the program.

Nellis Air Force Base Gets Short End of the Budget Stick

GAO Warns About Next Phase of F-35 Program