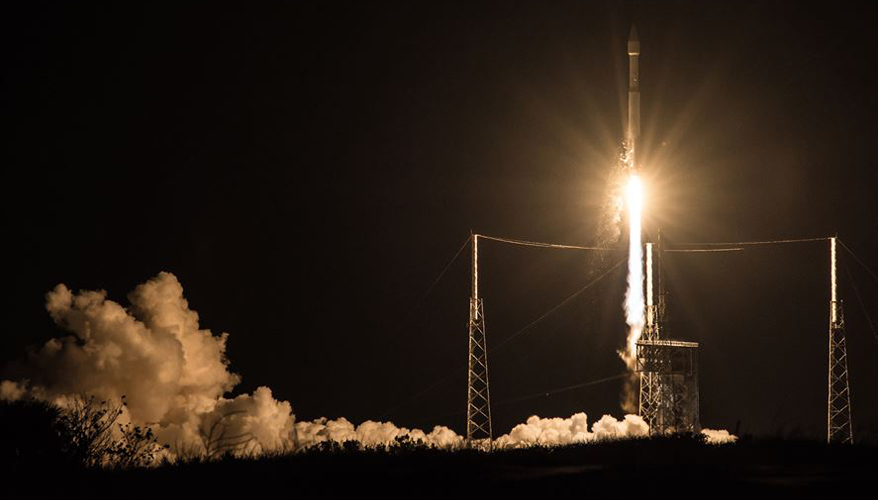 How to defend satellites in space has moved up the list of top issues in U.S. war planning. Many approaches have been tried and debated, but officials continue to wrestle with the central problem: Threats to U.S. space assets are growing both in volume and sophistication, and the Pentagon may not be able to keep up.

As the military — and the U.S. economy at large — have become hugely dependent on satellites for essential activities — the nation’s space agencies have come under pressure to defend that critical infrastructure. The broad consensus is that rushing to protect every system is unaffordable and a fool’s errand.

The thinking now taking hold is that fighting off space threats requires a nimble approach to predicting and responding to attacks, one that would dissuade and discourage enemies from attempting them in the first place.

“We have adversaries that are building weapons in low Earth orbit and weapons in geosynchronous orbit,” in addition to weapons that can target spacecraft from the ground, Hyten said last month in a speech at Stanford University.

Utmost on the minds of U.S. space operators are China and Russia.

China will “challenge the United States in space,” said Hyten. It already tested a low Earth orbit weapon in 2007. “And they continue to test that capability today and they continue to test it at multiple orbital regimes,” he said. “In the not too distant future they’ll be able to use that capability to threaten every spacecraft that we have in space.” Systems deployed by China, further, “have the potential to create vast amounts of debris,” Hyten said. “That’s just a horrible thing.”

Russia started building space weapons in the 1980s. “When the wall came down, those programs stopped,” Hyten noted. “But now they’re exploring significant anti-satellite capabilities both from a direct ascent perspective as well as a directed energy perspective. Yes, lasers.” The Russians could jam U.S. satellite communications signals with electronic weapons or destroy them with kinetic force, which adds to the debris problem. “We can’t allow that to happen,” said Hyten.

The intent to beat and deter enemies in space is clear and straightforward, but how the Pentagon accomplishes that goal is still very much an ongoing discussion. There is also a lively debate across the space industry on what role will be played by the private sector.

A paradox of sorts is unfolding in the space sector. Access to space — thanks to private-sector innovation and competition — is getting cheaper but such democratization is making military efforts to protect its assets harder and more expensive.

Hyten a year ago launched an initiative that he dubbed “space enterprise vision” in an effort to create a new business environment where the military and the private sector can collaborate and share ideas on how to move forward. Public-private teaming is commonplace in the defense business, but this one appears to be different because the military would have to radically change how it works with commercial companies.

The space enterprise vision is a “huge opportunity” for companies, especially for those that play both in the defense and commercial space sectors, said Bill Gattle, president of Harris Space and Intelligence Systems.

The thinking on military space is “changing rapidly,” Gattle said in an interview. “Whereas space was peaceful before, it’s now becoming a theater of war. It’s moving from the land of scientists and engineers to the land of the war fighter.”

For companies that want to do business with the Pentagon, this means that they will be expected to provide “solutions to problems” rather than stand-alone products, said Gattle. “It’s not just providing sensors, but ‘situational awareness’” of what is happening in outer space, he explained. The military also wants to do this “affordably,” which will require companies to be nimble and react quickly to military requirements.

The merging of military and intelligence forces — authorities allowed under Title 10 and Title 50 of the U.S. code — is seen increasingly in space operations and also would demand a different approach to buying technologies from the private sector, Gattle said. “We’re hearing the line between Title 10 and Title 50 is blurring right now,” he said. “Because of that, we are seeing more opportunities to address the solution at a bigger enterprise level.”

The Pentagon has tried in recent years to spur innovation and reduce cost with programs like “hosted payloads” to piggyback sensors on commercial satellites, and by promoting the use of small satellites to replace expensive do-it-all systems.

Projects like hosted payloads have existed in isolation rather than being part of a common foundation. “Now they are taking a comprehensive approach,” Gattle said. Hyten has shaken things up. “He’s been open to industry engaging in that discussion. How should the government design architectures so missions can be added in the future as threats change?” Thus far, the government has been dealing with this issue in "bits and pieces,” said Gattle. “They wanted to solve the resiliency problem. Then solve the protection problem. It appeared haphazard.”

The industry would like to see the government adopt a “plug-and-play” approach so new technologies can be inserted into the space enterprise, both the protection of satellites from space and from ground systems, said Gattle.

One of the most interesting trends happening in military space is that leaders are insistent about making this a war fighting issue. “Hyten is taking that same war fighter ‘kill chain’ process and applying it to space,” said Gattle. “The traditional space people, the scientists and engineers, to them it’s a foreign language. They don’t understand it because they don’t deal with war fighters very often.”

Companies in the military space market have heard the vision and “know what they are trying to do,” said Gattle. “Now the question is how do you implement it? It’ll be interesting how this plays out over the next few years.”

Vendors should be paying close attention to what Hyten has proposed, he said. “If you’re a contractor and you talk the traditional language, you’re not going to get very far.” The industry has to learn how to speak the war fighter language, said Gattle. A contractor cannot just offer a shiny new camera that can see pebbles on the ground. That would be a traditional pitch. Instead, a company would have to take a broader look at the problem.

The military wants to be able to request imagery of a particular area of the world, for instance, and not have to figure out what satellite should be used. This creates a different contracting environment that may require companies to be team players, said Gattle. This can be “scary” for some companies, he said.  “The government wants things to be interoperable. That’s a challenge for companies that push their own proprietary software and ground architecture. That’s a threat to them.”

This was the thinking behind an experiment by U.S. Strategic Command to invite commercial operators into its Joint Space Operations Center to explore ways to better work with the private sector. “They’re truly looking for ‘mission partners,'’’ said Gattle. “That’s a really fluffy term, but that’s what they’re looking for. They’re forming cells, asking people to help formulate what the future looks like, determine the architecture.”

Will it work? The jury is still out, said Gattle. The industry has to “do the trust thing,” wait to see how it plays out and whether there will be money at the end of the road.

The demand for space-based intelligence is only going to grow, he said. “It’s not just about having the most advanced sensor, but how do you get revisit coverage? The intelligence community wants to create persistence, continuity in intelligence. A lot of money is going into this,” he added. “They may trade capability for persistence. They may not need the most advanced sensor everywhere, but they really need to know what’s happening in Russia, China and North Korea. How do they understand what’s happening there to keep the world safe?”

The Pentagon needs significant private-sector help analyzing data from space, Gattle said. Satellites become big spigots of data, but the government doesn’t have enough tools to analyze it. “How do I know something is different today than it was yesterday? How do analysts focus on the right spot and not miss something?”

In areas like data analytics, where commercial industry is leaps ahead of the government, the Pentagon will need to adjust its attitude if it wants to leverage the innovation, said Gattle. “The defense world is enamored with commercial technology,” he said. But companies like Google are not interested in what the government wants.

“The commercial market wants to take what we have and use it. The government wants to customize it for their use,” he noted. “That’s a dynamic that I think is a hurdle that will have to be overcome in the next few years. The commercial industry has little interest in making custom products. They want to sell what they have. And the government wants to be in charge. Getting them to find a compromise position is key.”

During a speech to the Air Force Association Mitchell Institute this month, Goldfein offered some thoughts about space warfare.

“There really is no such thing as war in space, it’s just war,” he said. “But war can extend into space, and it isn’t a stretch to imagine how a terrestrial conflict can migrate to space.”

The “space enterprise vision” is becoming a “concept of operations,” said Goldfein. The goal is to “ensure it is presented in the lexicon of joint war fighting without space specific or unique jargon.”

The procurement process has to change, he said. There are now 60 organizations involved in the acquisition of space systems, “with any one of them being able to either slow down or stop progress,” Goldfein said. “We must make some tough but essential decisions about who is responsible for setting space requirements and who is responsible for acquiring against those requirements.”