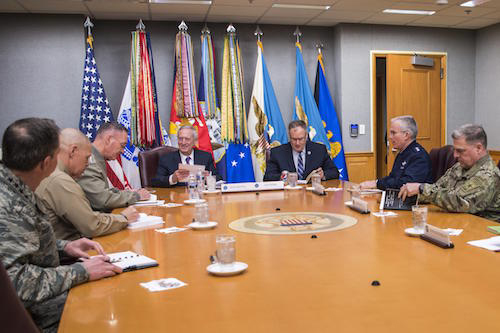 Defense pundits and industry watchers were surprised this week when the Pentagon released extensive new “budget guidance” from Secretary James Mattis that spells out the process for how the Pentagon will justify its upcoming funding request to Congress. The proposed budgets will seek to plug immediate funding holes but also set in motion the military buildup that President Trump promised.

There is an elephant in the room, though, which is the Budget Control Act that imposes strict limits to federal discretionary spending. Mattis’ budget guidance goes out the window if the BCA is not repealed.

“It’s our hope and intent that we can operate in a budget environment outside of sequestration,” said Defense Department spokesman Navy Capt. Jeff Davis. “We’ll continue to work these budget submissions very closely with the Office of Management and Budget.”

Mattis has held private discussions with members of Congress on the issue but Davis would not comment on whether the secretary is confident that the BCA caps will be lifted any time soon.

The restrictions in the Budget Control Act are in effect until fiscal year 2021. “We have not seen any plan to lift or strike the BCA and foresee difficulty getting a major hike through fiscal conservatives and Senate Democrats,” noted industry analyst Roman Schweizer, of Cowen Washington Research Group. “OMB's budget blueprint is expected this month and the reaction to it will be the first indicators of likelihood.”

It is noteworthy that the Pentagon is putting out documents on its budget “sausage-making” when there are no top-line targets yet from OMB, Schweizer observed.

Davis said Mattis intends to build the budget request from the ground up, based on legitimate needs rather than artificial targets. “We don’t just pick a number and fill it in with capabilities,” he said. “We’ll come up with very real capabilities we need to restore readiness and balance programs. Then we’ll work to get the appropriate price tag for it.”

This will not be a free-for-all, Davis said. “Secretary Mattis has said he wants to be a faithful steward and get maximum value for the taxpayer dollar. That’s what this process is designed to do.”

According to the three-phase plan, the Pentagon will request by March 1 an emergency budget amendment for fiscal year 2017 to fund immediate needs like precision-guided munitions and pilot flying hours. The fiscal year 2018 budget proposal due May 1 would seek longer-term investments to increase the size and capability of U.S. forces. The foundation for the 2019-2023 five-year budget would be a new National Defense Strategy that the Pentagon is now drafting. The Trump administration also has ordered a nuclear posture review and a missile defense review, both of which could add significant new expenditures.

The Pentagon’s budget not only faces huge political and fiscal pressures but also practical constraints such as a narrow window of time on the congressional calendar.

“There is lots to do, and not much time,” said Bloomberg Government analyst Rob Levinson. A deadline to increase the national debt limit looms March 16. Federal funding for fiscal year 2017 runs out April 28, when the current continuing resolution expires and action will be needed to prevent a government shutdown.

There are larger variables at play, too, Levinson said during a Bloomberg webinar. “Trade-off decisions could be affected by changes in relations with Russia,” he said. The Pentagon’s ambitious “third offset” strategy is predicated on the need to counter rising powers like China and Russia. “Trump appears to feel differently about Russia than many in Washington, but is concerned about China, which could steer more money to the Navy and Air Force at the expense of the Army.”

Trump, like every president, will be forced to make tradeoffs between spending plans, tax cuts and deficits, said Levinson. “A most likely outcome is increases — not necessarily equal — for defense and domestic spending with resulting deficit growth. No faction will get everything they want: not the fiscal hawks, defense hawks, Democrats or the president.”