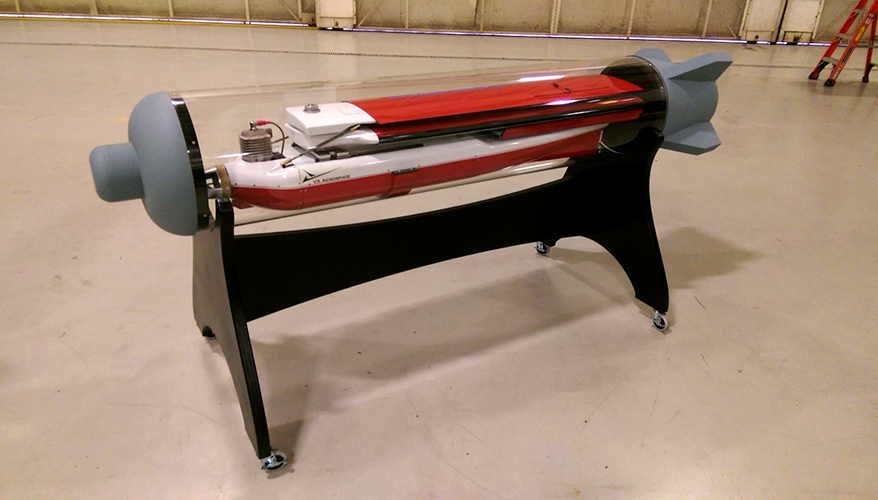 The company revealed a concept demonstrator for the Dash X — known internally at Northrop as Remedy — to reporters at a media day at its facilities in Linthicum, Maryland. The system was co-developed with VX Aerospace, a Morganton, North Carolina-based advanced composites manufacturing and design company.

The idea was to create "an expendable device or sensor" that could be deployed in a clusterbomb-type canister from a maritime aircraft, which then extracts itself to covertly gather signals intelligence and other forms of data, Thompson said.

"It deploys itself out, and it has … these little special listening devices in the belly, and has a communication device that speaks back" to the airframe, he said.

Once airborne, the wingspan of the Dash X measures about 12 feet, according to the company. It can operate for 10 hours at a speed of 60 knots, Thompson said.

During the flight demo, a manned aircraft directed the Dash X systems to change missions and locations in real time, while the drones collected and shared electronic warfare and signals intelligence data inflight.

"These flew forward looking for an un-located [radio frequency] object," Thompson said. "They went out, they found that vehicle, they listened to the whispering and they pulled it back to … this test airplane." The Dash X platforms were able to detect, identify and geolocate the object while deployed, he noted. In a future operational setting, the technology could be used to find and monitor a variety of enemy capabilities such as tanks or ballistic missiles, he said.

The Navy for years has been working to beef up its electronic warfare capabilities, as near-peer adversaries are taking advantage of advances in commercial electronics to attempt to beat the U.S. military's systems. Thompson, a former Navy electronic attack squadron commander and requirements officer, said the Dash X could be a cost-effective, innovative tool in the service's electromagnetic maneuver warfare arsenal.

"How does an airframe with people inside of it … persist in this very hostile environment?" he asked. "How can I listen for a long time for people that are hiding?"

Northrop wanted to develop a platform that was inexpensive to operate and expendable, that could travel hundreds of miles to gather data but be small and slow enough that it is virtually undetectable by adversaries, he added.

"It's survivable because it's absolutely so small and so slow," he said. "No one's looking for an object that moves at 60 knots without the wind and that's made of tin."

In theory, the Dash X could carry any type of payload, including munitions. But the U.S. government is specifically interested in deploying sensors including electro-optical, infrared, or radio-frequency payloads, Thompson said.

The Northrop-VX Aerospace team partnered with North Carolina State University and the University of South Carolina on the Dash X development. They received funding from the Office of Naval Research, Thompson said. Other partners include the Naval Air Systems Command program office 265, which oversees the service's F/A-18 Super Hornet and EA-18G Growler aircraft.

The Navy also paired the Dash X with a Growler manned-unmanned teaming initiative in its recent Fleet Experimentation, or FLEX program over the summer, according to a service press release. The program is sponsored by the commanders of U.S. Fleet Forces Command and Pacific Fleet and conducted by Navy Warfare Development Command.

Thompson declined to comment on the cost of the Dash X, but said Northrop Grumman and ONR jointly funded the flight demonstration.

The next step is to ensure the platform can unfold in the air and take flight, he added, noting that Northrop Grumman and the U.S. government are currently in conversations about how funding will be allocated for further tests. Research and development could be completed by 2019, he said.

"Northrop Grumman is applying various disruptive technologies to develop a number of innovative, multifunction capabilities, including the pairing of manned and unmanned systems," he said.