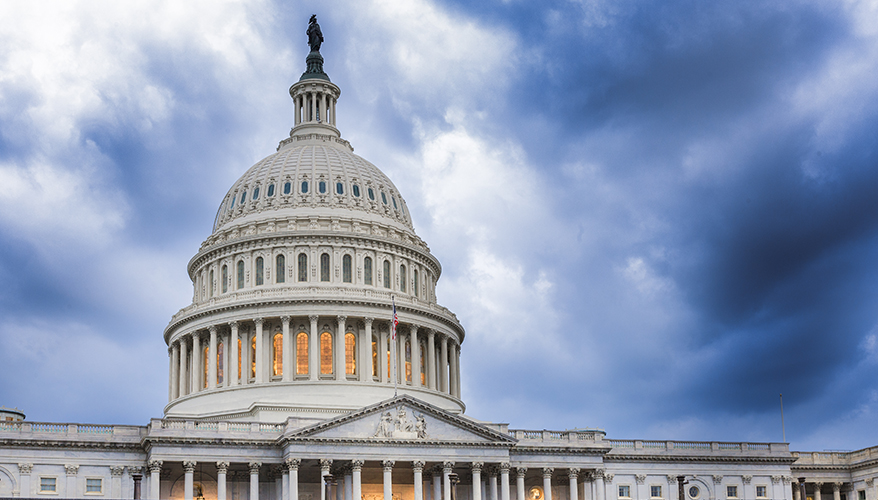 SIMI VALLEY, Calif. — Members of Congress who attended the Reagan National Defense Forum Dec. 2 sounded a pessimistic note about the prospects for reaching a budget deal for fiscal year 2018 before the latest continuing resolution expires.

With just a few days left before the deadline to pass new spending bills to avoid a government shutdown, lawmakers said the Defense Department can expect to continue having to operate under the restrictions imposed by CRs for several more weeks or months.

Continuing resolutions frustrate Pentagon leaders and acquisition officials because they freeze funding at the previous fiscal year’s level and make it difficult to reprogram money or start new programs.

“On the budget side we are going to walk into probably a three-four week [or] two-three month utter disaster starting on Friday [Dec. 8]” when the current CR is set to expire, said Rep. Adam Smith, D-Wash. “Anyone who thinks we’re close to a deal on the appropriations bills is not paying attention,” the ranking member of the House Armed Services Committee said during a panel discussion.

On a different panel, Sen. Jeanne Shaheen, D-N.H., said Congress will likely pass additional continuing resolutions that run through January or beyond.

HASC member Rep. Mike Gallagher, R-Wisc., said some defense hawks on Capitol Hill are looking to “make a stand” later this month, most likely after another two-week CR is passed to buy more time to reach a budget agreement.

“Whether we disaggregate the defense [appropriations] from the rest of spending is the discussion right now” among congressional leaders, he said. “I don’t think there’s appetite among the self-identified defense hawks in Congress for a long-term CR going into the next year.”

Whether such an attempt to lift the military spending caps imposed by the Budget Control Act would be successful remains in doubt. Congressional Democrats have long insisted that a repeal of the defense caps must also be accompanied by a repeal of the caps on non-defense programs.

Any agreement “has got to deal not just with defense spending but also the domestic side of the budget because until we do it’s not going to get done,” said Shaheen, a member of the Senate Armed Services Committee.

Throughout the conference, which is held annually at the Ronald Reagan Presidential Library in Simi Valley, California, national security leaders in government and industry talked about the need for greater defense spending and the repeal of the Budget Control Act. Smith noted that not everyone in Washington, D.C. — or the rest of the country — shares that view.

“Whenever I’m in gatherings like this with national security people, there is this assumption that there is this broad support for an increase in the defense budget and everyone sort of feels good about that,” he said. “I don’t see it happening,” he added. “If we were so hell-bent to do that, if this was such a priority, why are we sitting here in December and we still haven’t done it?”

Smith said lawmakers’ fears about angering their constituents are making it difficult to reach a deal. The American people favor irreconcilable policies including a balanced budget, tax cuts and no reductions to popular spending programs, he added.

“No matter what we vote for … it will be politically unpopular,” he said. “What everyone kind of wants is, ‘Yeah, pass [a budget] but I don’t want to be the one who votes for it.’”

Smith predicted that the government will be operating under another CR when officials and industry executives gather at next year’s Reagan National Defense Forum.

Participants at this year’s forum railed against the effects of continuing resolutions and budget uncertainty.

Marilyn Hewson, chairman, president and CEO of Lockheed Martin, said these trends have been driving out small- and medium-sized businesses that are part of her company’s supply chain.

“Let’s be clear-eyed about what continuing resolutions does to our industry partners and how it affects me as a service chief,” he said. “When I go to [a contractor] and say, ‘I don’t know how many munitions I’m going to buy next year and would you please keep this very sophisticated workforce … with all of its security clearances engaged, and oh by the way I’m not going to be able to bring you the money until the last half of every [fiscal] year’ — that’s a real concern to me.”

Pentagon leaders will meet in the coming days to discuss which high-profile programs they will request exemptions for if there is another CR, Undersecretary of Defense for Acquisition, Technology and Logistics Ellen Lord told reporters at the conference.

Meanwhile, defense officials are working on a new modernization strategy as they continue to face budget constraints, she said.

“We are looking in the department at a modernization strategy and focusing on specific technology domains to really align all of our service labs along with” other federally funded research and development centers, Lord said.

Hypersonics is a promising area that could be one of the prioritized technology domains, she said.

“The department leadership wants to make sure that we are aligned across the services, across all of [the office of the secretary of defense] on a strategy that gives us greater overmatch against our adversaries,” she said. “In order to do that, particularly with constrained budgets, we need to have a very tight strategy that makes choices and makes sure we are taking all of our resources, all of our funding and aligning those.”

Lord expects a new modernization strategy to be completed in 2018.